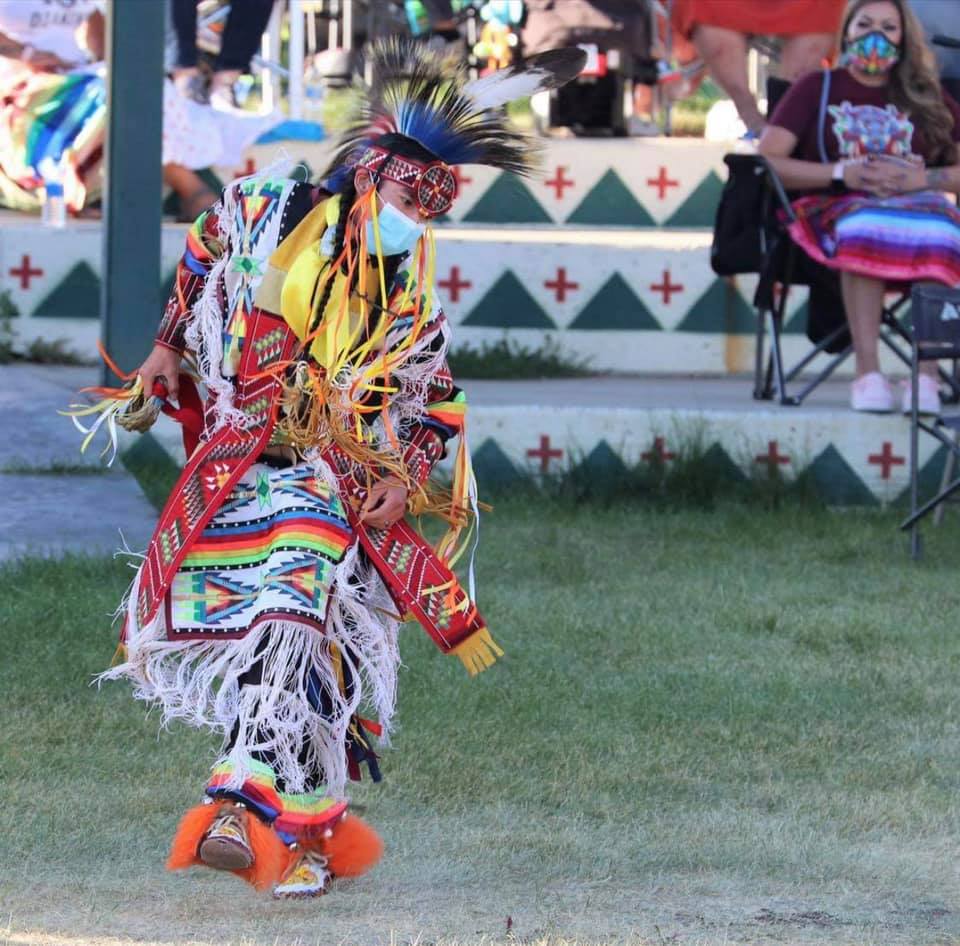 New Town, N.D. — With a personalized approach, crystal clear messaging and innovative outreach initiatives, the MHA Nation is a model for spreading and sharpening census awareness.

“It's really important because the census count is how the federal government allocates funding,” said Cheyenne Brady, who is leading MHA Nation’s Census Efforts.

“If we’re extremely undercounted, that poses a threat of extreme underfunding of federal programs our people rely on for education, housing, healthcare, food programs… As a result of our outreach we’ve gotten over 500 households to complete their census, so it’s pretty good.”

There are roughly 7,000 tribal members living on the reservation, which serves the Three Affiliated Tribes: the Mandan, Hidatsa and Arikara.

In this final stretch before the census deadline on Sept. 30, Brady and her team are making a strong last push to get their people counted.

The main event on the final countdown calendar was The Fort Berthold Counting Coup on the Census Celebration at Fort Berthold Reservation’s Antelope Society Powwow Grounds on Saturday, Sept. 12.

At the unique powwow celebration, observers listened to the familiar voice of career announcer Charlie Moran Sr. as they watched the action from socially distanced seating areas or their vehicles.

For a community that’s been deprived all year of get-togethers and cultural festivities, the event provided much-missed sights like flying rainbow fringe and sounds like tinkling jingle dresses and drum beats. It also satiated a craving for friendly communal competition with some socially distanced bingo.

Folks who wanted to be part of the celebration but hadn’t completed their census were able to take care of it right then and there.

“We had staff on hand to help them complete the form online. We had laptops and our phones,” Brady said. “Part of the Elder population likes us to type in their information with a laptop so they can see the screen.”

To control attendance for pandemic safety, only on-reservation MHA Nation members were allowed at the actual event, but a wider audience attended virtually via live broadcasts on the Social Distance Powwow Facebook group and MHA Nation Facebook page, as well as a livestream on the reservation’s local radio station KMHA.

“We were able to share our celebration with people off reservation and people from other tribes,” Brady said. “Having a celebration during this crazy time really brought a lot of uplift to the community because we haven’t had a celebration all year.”

The celebration’s biggest sensation was the collection of t-shirts given out at the event, which now allow MHA Nation members to wear their awareness.

“One thing that's really taking off are these really amazing t-shirts we created that say ‘We Count,’” Brady said. “They’re starting to circulate and people are calling and saying ‘How can we get one?’”

The answer: Complete the census. 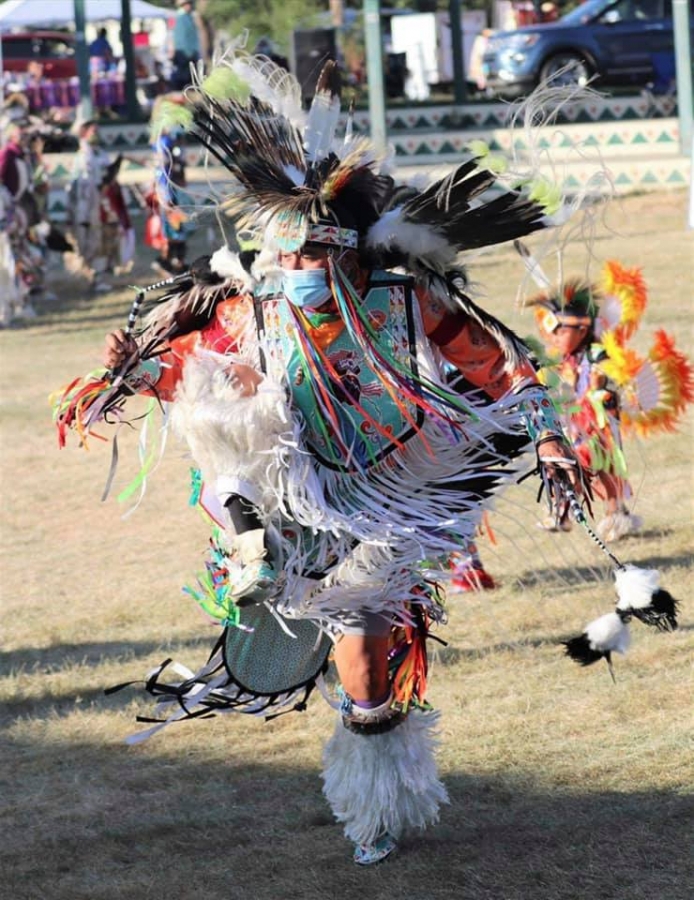 The way Brady and her team went about making the shirts is testament to their thoughtfulness and thoroughness, because there isn’t just one shirt.

“We have six different types of shirts, because here on MHA we have three different tribes: Mandan, Hidatsa and Arikara. We wanted to really personalize the shirts,” Brady said. “Many individuals are a mixture of the three tribes, but there are still some who identify with one or two a little more.”

Vintage photographs of tribal ancestors decorate each shirt, and there are two versions for each tribe: one featuring a female ancestor and the other depicting a male ancestor.

“I outsourced the graphic design to tribal member Rusty Gillette. He came up with the idea,” Brady said. “We’re all about supporting the community.”

Brady’s small, fiercely committed census-awareness team started taking shape at the beginning of the year, at the behest of Tribal Councilwoman Monica Mayer.

“She really wanted the community to be aware of the census,” Brady said. “We took the lead on the effort for the whole entire tribe.”

Brady also reached out to influential community members to help with the cause. Some volunteers, like Charlie Moran Sr., ended up becoming intensely involved.

“Cheyenne just came to a few of us and said, ‘Can you help me?’ I said, ‘Sure, whatever you want me to do,” Moran said (Hidatsa, Mandan, Turtle Mountain Band of Chippewa). “We need more people like Cheyenne.” 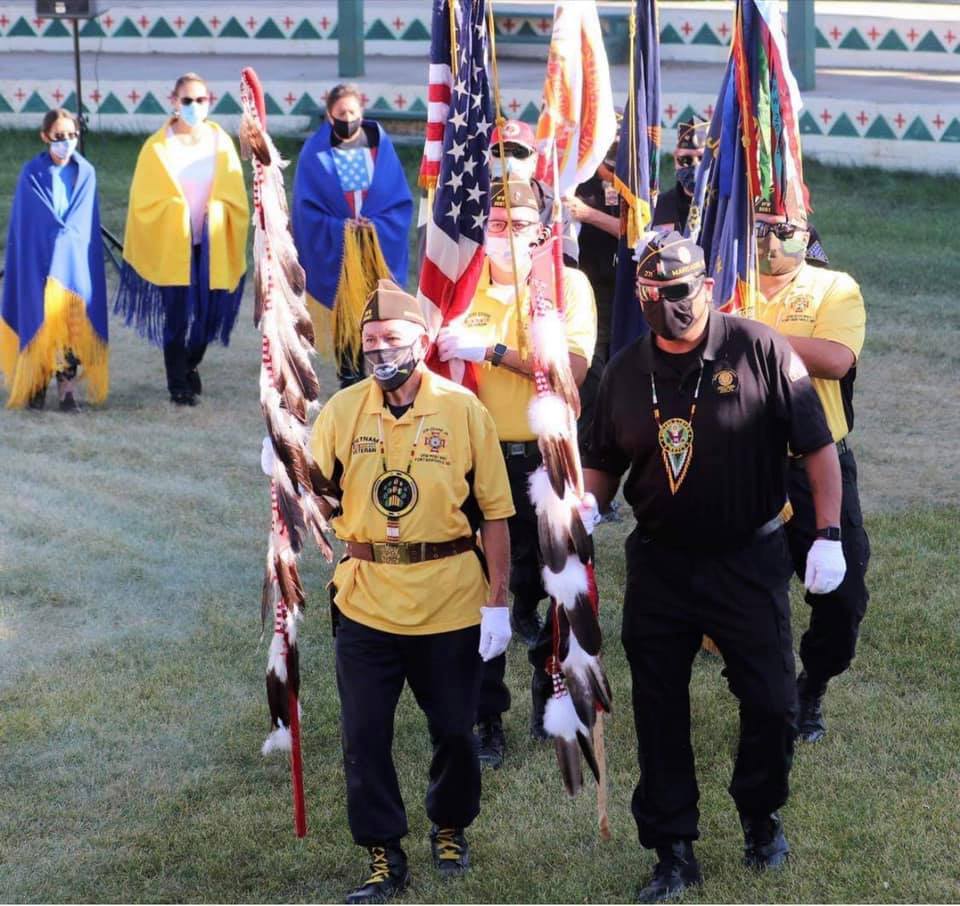 Photo by Logan Davis. Moran knows firsthand the gravity of the census.

“I worked on federal grants, and when you apply for grants you want to know the numbers. When I did work for tribes and the Department of Housing and Urban Development, we had to look at those numbers, so I understand that part,” Moran said.

“If we wanted to get an ambulance or hospital in our community and we don't have a good representation in numbers, funding sources may say, ‘Your community is so small, why do you need another one?’” he said.

Moran shares his wisdom and encourages tribal members to fill out their forms in a series of census-awareness videos featuring community members speaking directly to the community about specific census-related issues.

In Moran’s video, he zeroes in on how distrust of the government can get in the way of tribal members participating in census, and he attempts to assuage the anxiety.

“I know we've all been trained as kids not to trust the government,” Moran says in the video. “But with this one, you can. It is going to affect your homes, your community and your schools.”

Moran fully understands why his fellow tribal members may be reluctant to take part in the census, suspecting it may be a government scheme to somehow find and harass them.

“For us, there are a lot of wounds from the government and they're not old wounds. They’re fresh still,” he said. “When they say the government is doing the census, people are going to get skeptical.”

Brady is also highly conscious of this obstacle, but knows that an accurate count is crucial.

“That's something I think every tribal community struggles with,” she said. 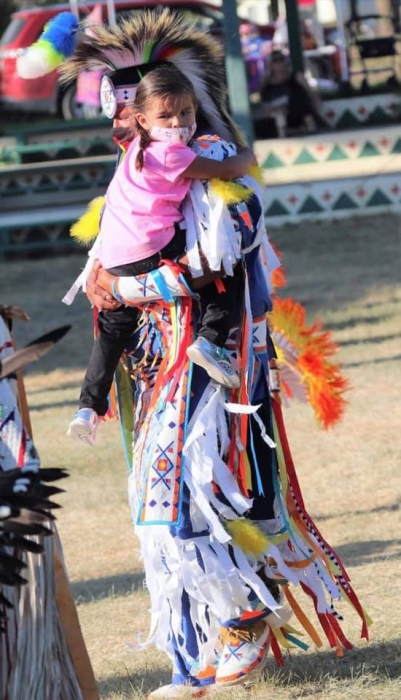 Photo by Logan Davis.Other influential tribal members in the community videos include Dr. Twyla Baker, President of Nueta Hidatsa Sahnish College, who explains in detail how census data impacts tribal colleges, and Andrea Yellowbird, who focuses on the urgency of including children in the count.

In addition to the videos, shirts and celebration, Brady and her team have also organized outreach efforts including prize raffles, seven drive-up events where community members received help filling out their forms, and an unusually individualized mass mailing campaign.

“That was our first initiative to make people aware,” Brady said. “We really wanted to personalize mailings and have something different members would keep and maybe put on their refrigerators. Those got sent to every enrolled member whether they live on or off reservation.”

With the mailings, the census team appealed to tribal members with familiar images and powerful words evoking pride and respect.

“The mailings talked about how we are invincible and we count, and there were four different types of postcards related to our tribe,” Brady said.

Those postcard pictures include a shot of tribal school students, a portrait of famous MHA youth dancer Peyton White Buffalo, an image of a traditional Earth Lodge, and a five-generation photo of a great great grandmother all the way down to her great great grandchild.

“I hope that our community is well aware of the census happening and the effects that it can have on our communities,” Brady said. “Ultimately we hope everyone just takes a couple minutes to complete the census.”

If they need any more motivation, perhaps taking in tribal elder Harriett Good Iron’s video will do the job.

“What matters to you? Schools? Transportation? Hospitals? Veterans? Data from the U.S. Census Bureau helps inform planning efforts for all of these important community resources and the majority of our federal tribal programs,” Good Iron explains in her video. “Remember, we count. Be counted. And you have to listen to me because I am an elder. And that’s what you need to do, you need to listen to us elders.”