The letter, dated April 24, also asks for a grant of clemency for Peltier, a 75-year old tribal citizen of the Turtle Mountain Band of Chippewa Indians.

“As part of the national response to the COVID-19 pandemic, the Department of Justice (DOJ) recently authorized the Federal Bureau of Prisons to release elderly inmates and those with underlying health conditions from federal prisons. Due to the unprecedented impact of the COVID-19 pandemic on our country and Mr. Peltier’s underlying health conditions and age, we request immediate action to be taken to release him from federal custody,” the two members of Congress wrote.

Peltier suffers from heart problems and diabetes. He is incarcerated at the Coleman Federal Correctional Complex in Florida for a conviction related to the death of two Federal Bureau of Investigation (FBI) agents killed in July 1975.

Supporters believe that Peltier, an Indigenous activist, was wrongfully convicted in 1977 for a crime he did not commit. Imprisoned for over 45 years, Peltier has the support of Amnesty International, and other human rights organizations. Over the years, some 50 members of Congress and others—including Judge Gerald Heaney (8th Circuit Court of Appeals) who sat as a member of the court in two of Peltier’s appeals—have all called for his immediate release.

Since the outbreak of the pandemic, Peltier applied for a compassionate release and we denied on May 1, 2020 with the only explanation given “not at this time.”

In releasing this letter, Rep. Haaland and Grijalva responded to the support for Peltier from constituents in their districts, and throughout New Mexico.

Rep Grijalva was among several members of Congress who were supportive of Peltier’s 2016 clemency petition to President Obama. Over 12,000 signatures supporting clemency for Peltier have been gathered from New Mexicans, hundreds have gathered for annual events in support of Peltier here. Worldwide, nearly a half million combined petition signatures, postcards were submitted to the Obama White House, and an unknown number of phone calls to the White House comment line were placed.

Over the course of the last 16 months, Peter Clark, the former director at International Leonard Peltier Defense Committee, who resides in Albuquerque, N.M., which is part of Haaland's congressional district met with the congresswoman and her staff, and provided information to the New Mexico congressional delegation regarding the various avenues of relief for Peltier.

Some of Peltier’s supporters include: Petuuche Gilbert, president of Indigenous World Association; Norman Patrick Brown, who was among one of the young persons who survived the June 26, 1975 shootout; human rights advocate, Eda Gordon; and Lenny Foster, Peltier’s Spiritual Advisor of over 30 years who is Board member of the International Indian Treaty Council and American Indian Movement.

Leonard Peltier's eldest son Chauncey Peltier is a co-founder of the Indigenous Rights Center located in Albuquerque. Leonard's daughter, Kathy Peltier, is an enrolled citizen of the Navajo Nation, and had recently written to Rep Haaland seeking support for her dad.

To learn more about the Peltier’s case, go to Leonard’s Defense Committee’s website www.whoisleonardpeltier.info transcripts and other archival material. 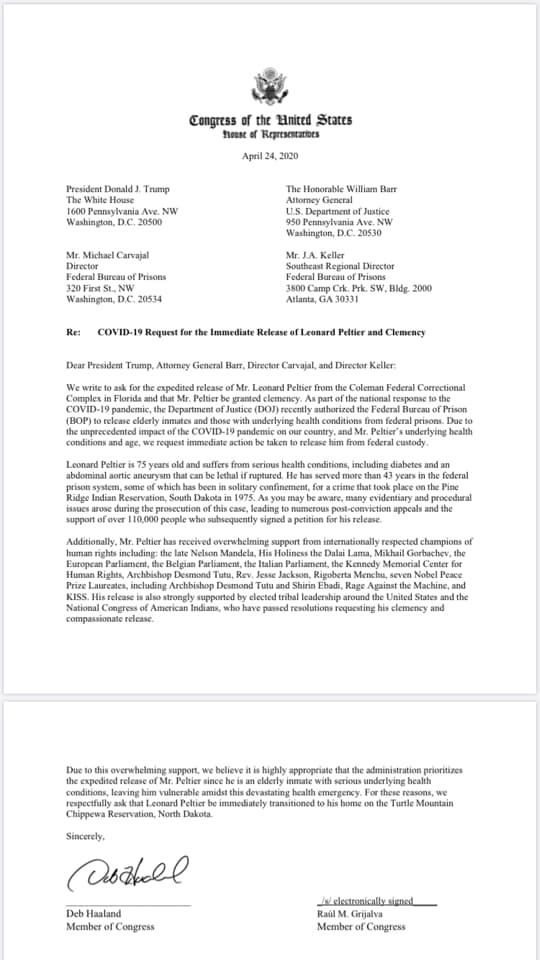