Chief Leonard Crow Dog Remembered by Leonard Peltier and Others 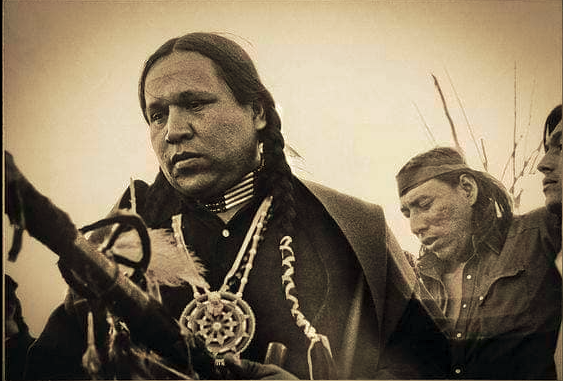 ROSEBUD INDIAN RESERVATION — Rosebud Sioux Tribe President  Rodney Bordeaux on Sundey ordered flags to be flown at half-mast on tribal government buildings and the tribal casino for one-week in honor of Chief Leonard Crow Dog, who begain his journey to the spirit world just after midnight Sunday.

Chief Crow Dog, 78, was laid to rest on Monday on the Rosebud Indian Reservation in South Dakota.

Chief Crow Dog is being remembered lauded for his many decades of leadership in preserving the spiritual teachings of the Lakota people.

Leonard Peltier, considered by many in Indian Country as a political prisoner, sent a statement on Chief Crow Dog's death from the United States Penitentiary in Coleman, Florida.

Being in prison it takes time before we can get info from the streets and family, but I just heard of the great loss for the Lakota Nation and all Native peoples.

I met Crow Dog back in the 60's when we were both in Colorado for some Native event. It's been so long I forget what it was about now, but I know it was about treaties and civil rights for all peoples in the USA, and the world really.

Then later on, in Rosebud, was when we really became friends. He invited me to his home and I met his mother and father and family. His mother fell in love with me and adopted me as one of her sons to replace Leonard's twin who passed away years before, and so Leonard and I became brothers, and good friends.

I enjoyed his ceremonies, as he always put some good action in them that made them more interesting and exciting so that YOU WANTED TO GO TO MORE WITH HIM, AND WE HAD SOMETHING TO TALK ABOUT FOR DAYS.

I'm on a very short time limit, so I have to cut this short, but I want everyone to know Leonard fought hard for our peoples and our treaties and our religious rights, he held perhaps THOUSANDS Of CEREMONIES AND BROUGHT BACK A LOT OF NATIVE peoples to our religion. We will miss him and I don’t think he will ever be replaced.

I'm sorry, but time is up, so I have to cut this short, otherwise I have a thousands more good things to say about my brother Leonard Crow Dog.

Leonard Crow Dog was a powerful Wicasa Wakan, Holy Man, with a beautiful vision of the Sacred Mystery of the Universe.Leonard was in touch with the sacred power that connects all of us and the Creation. As a young man, Leonard Crow Dog learned from his father Henry Crow Dog and Lakota elders. He did not go to school, instead his parents enlisted four medicine men to guide his education. Throughout his life, Crow Dog learned from the University of the Universe, as he would say, and he shared his understanding of WoLakota with our Sicangu Oyate, the Oceti Sakowin, and Peoples of all Nations.Leonard Crow Dog was the spiritual advisor to the American Indian Movement (AIM) and close friends with Russell Means. He stood for human rights, and he knew that the Lakota received our rights from the Creator—our Breath of Life, Freedom to dream and live our visions, and our sacred duty to protect Unci Maka, Grandmother Earth.

First, I want to extend mydeepest  condolences to Cheif Crow Dog's family and the Lakota people for the loss of our great spiritual leaders.

I attended sweat lodge ceremonies and pipe ceremonies at Wound Knee that made me spiritually strong. He was a very great teacher.

He was a sun dance leader. His family kept the ceremonies throughout the years—underground. He helped revive the sun dance ceremonies on Pine Ridge.  We learned from his spiritual teachings.

He always reminded us to have faith in ceremonial practices, including daily sweat lodges and pipe ceremonies. He always encouraged us to participate in the ceremonial ways of our ancestors.

It will be very difficult to replace him because he was one of a kind.

I first met Leonard Crow Dog in 1969 in Minneapolis, on Franklin Street in the heart of Native community there. I was there to assist my husband Chuck Robinson establish the first American Indian Movement (AIM) survival school. Crow Dog would come back then to offer support and prayers. He loved being around the Native children as they were eager to learn about their culture.

Even in the latter years of his life, Chief Leonard Crow Dog was sick and confined to a wheelchair but never failed to spend time with us when we asked him, saying prayers and giving us comfort.

He was with us in a tribal meeting recently in 2020 to pray and help conduct the ceremony at Pe Sla, the sacred land that the Sioux tribes returned to them.

With the passing of Chief Leonard Crow Dog I am remembering a few years back when he held a powerful blessing through a "Holy Horse Dance" Sunkan Wakan at Bear Butte Lodge upon the acquisition of this beautiful lodge by the Rosebud Sioux Tribe Tribal Land Enterprises.

As he led the pack of horses around the circle he asked the people to pray hard to make the horses dance for a spirit blessing road. After a very long time and intense prayers, the lead horse began an amazing dance like it was prancing on air. It was a spiritual moment as the other horses began dancing and the people began crying and affirming a hoka hey day.

In a spiritual coincidence, Bear Butte Lodge burned a few days ago by accidental fire and now both Leonard and the lodge are gone. I am certain there is a holy horse dance greeting him in the star camps! And the blessing at Bear Butte in the sacred He Sapa still exists, lodge or no lodge. There is no doubt the holy ones are greeting Leonard and the 215 sacred children who were hidden in residential school burials. It is a red day and night , as we pray for all his family and relatives. Journey well, wotakuye.

Chief Crow Dog was one of the most powerful spiritual leaders of our time.  He loved our Native people and the creation.  He helped us understand that our rights flow from the Creator, Wakan Tanka.  His spiritual guidance has helped our Indian nations to stay on the path of sovereignty, human understanding, and the cause of Mother Earth.

Decades ago, Chief Crow Dog warned us that we must care for Mother Earth or we would bring about our own downfall.  He foresaw that the destruction of Mother Earth would fall back upon the Children of the Earth.

Leonard Crow Dog had a true and strong vision and his leadership gave us the strength to carry on, to always defend our sovereignty, our traditions and ways of life.  He helped us achieve important milestones--the Indian Self-Determination Act, the American Indian Religious Freedom Act, and many others.

In his later years, he stood by our side as we carried the fights that he and other AIM leaders fought in the 1970s.  He always cared for our Native children and grandchildren and the coming generations.  He was a good and kind man.

He has always been a strong advisor to tribal leadership. He also encouraged my daughters, whom he called his granddaughters, to always continue their work with the environment in an effort to protect Mother Earth.  I will journey to be with the family during this difficult time. Prayers to his family and all Indian Nations as we mourn the loss of this great Spiritual Leader.

Phil Lane, President and Chair of the Board of Directors, Compassion Games: Survival of the Kindest

Chief Leonard Crow Dog life has been dedicated to uplifting our Indigenous peoples and our human family for more than 50 years. And his work will continue stronger than ever from the Other Side Camp!