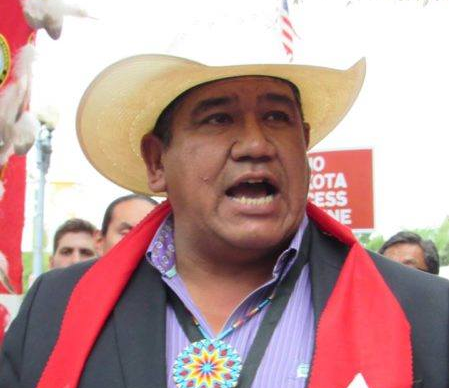 The election is 28 days away on Nov. 3. Voting has already begun in 18 states.

Frazier, who has been at odds with the Trump administration over the tribal checkpoints at the borders of the Cheyenne River Indian Reservation to stop the spread of Covid-19, says it is important to support a candidate for president who is willing to maintain a mutually respectful relationship between the federal government and tribal nations.

“Over the course of many years, I have had the opportunity to experience what it takes to lead a sovereign nation and I have seen the work Joe Biden did during his terms as vice president of the United States. I believe Mr. Biden will foster a mutually respectful relationship between the federal government and tribal nations,” Frazier said in his endorsement statement.

“It is important for all native nations to encourage tribal members to participate in the election process to ensure that tribal governments have a federal administration that is willing and welcoming of our desires of peace and honoring the treaties,” Frazier’s statement continued.

Perhaps as a jab at President Donald Trump, Frazier said, “We Native Americans are proud of our land and our participation in the beautifully diverse cultures we bring to this nation.”

Frazier is now in his second term as chairman of the Cheyenne River Sioux Tribe. In addition to serving as his tribe’s chairman, he is president of the Great Plains Tribal Chairmen’s Association. During the Standing Rock resistance to the Dakota Access pipeline, Frazier was one of the most outspoken American Indians who spoke out against the pipeline.

The Cheyenne River Sioux Tribe has a population of almost 16,000 tribal citizens.