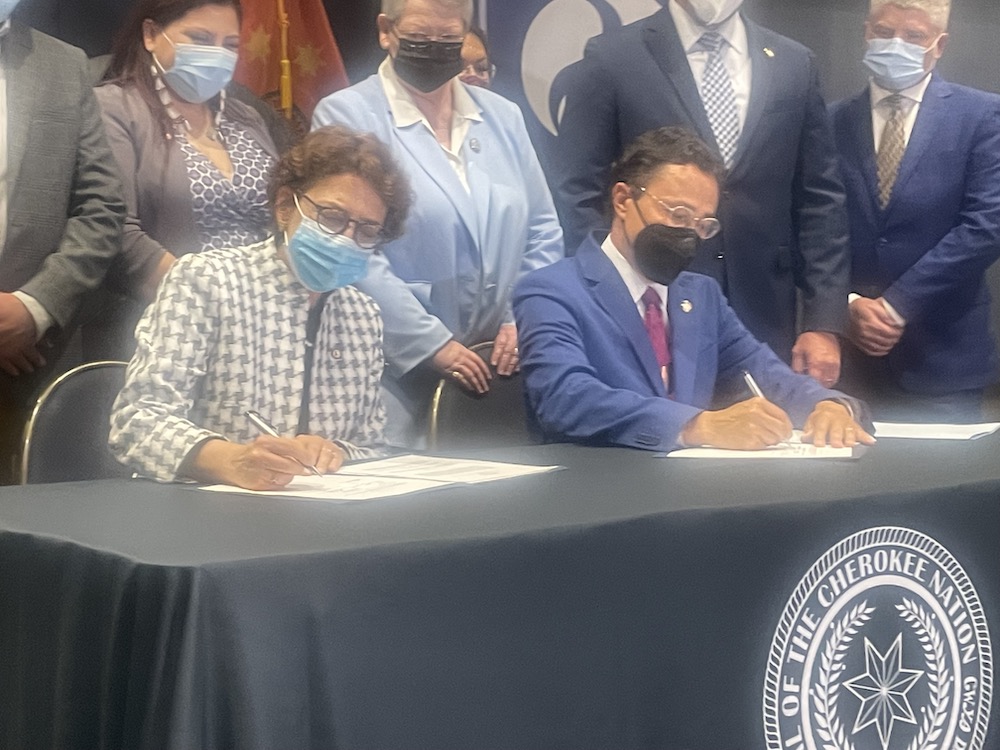 TAHLEQUAH, Okla.  — The Cherokee Nation signed an historic self-governance agreement with the U.S. Department of Transportation (DOT) on Tuesday. The pact allows one of Indian Country’s largest tribes to plan and oversee its own road construction planning and transit projects without having to seek federal permission and oversight over projects.

The Cherokee Nation is the first tribe in Indian Country to enter into such an agreement with the Transportation Department.

The Tribal Transportation Self-Governance Program compact and funding agreement was signed by Cherokee Nation Principal Chief Chuck Hoskin, Jr. on behalf of the tribe and U.S. Department Transportation Secretary Pete Buttigieg, who did not attend the signing ceremony because he tested positive for COVID-19.

U.S.  Deputy Secretary of Transportation Polly Trottenberg attended the event in Buttigieg’s place. She signed the document as a witness at the ceremony.

Trottenberg said the agreement had its roots during the Obama administration and was further developed in the Biden administration.

“This is an incredible model and it took us a while to get there. And I think we learned a lot in the process,” Trottenberg told Native News Online, adding, “We certainly want more such agreements. We hope this is what the future looks like for Indian Country. The Biden Harris administration is committed to this mission.

“We have a lot of new dollars to bring to the table and we want to make sure we are really working closely on the ground to meet the needs of all those local communities. We hope this is a template for a lot of agreements to come,” Trottenberg said.

Allowing the Cherokee Nation to self-govern its transportation funding will eliminate a step in what can be a long process when seeking permission to move forward on transportation projects.

“This agreement will speed up funding because we can get some forward funding that will allow us to plan further into the future,” Hoskin said.

Hoskin sees the agreement as a means for development of transportation projects in rural areas of the Cherokee Nation.

“The agreement will ensure those rural communities will have more channels of transportation, which is exciting,” Hoskin said. 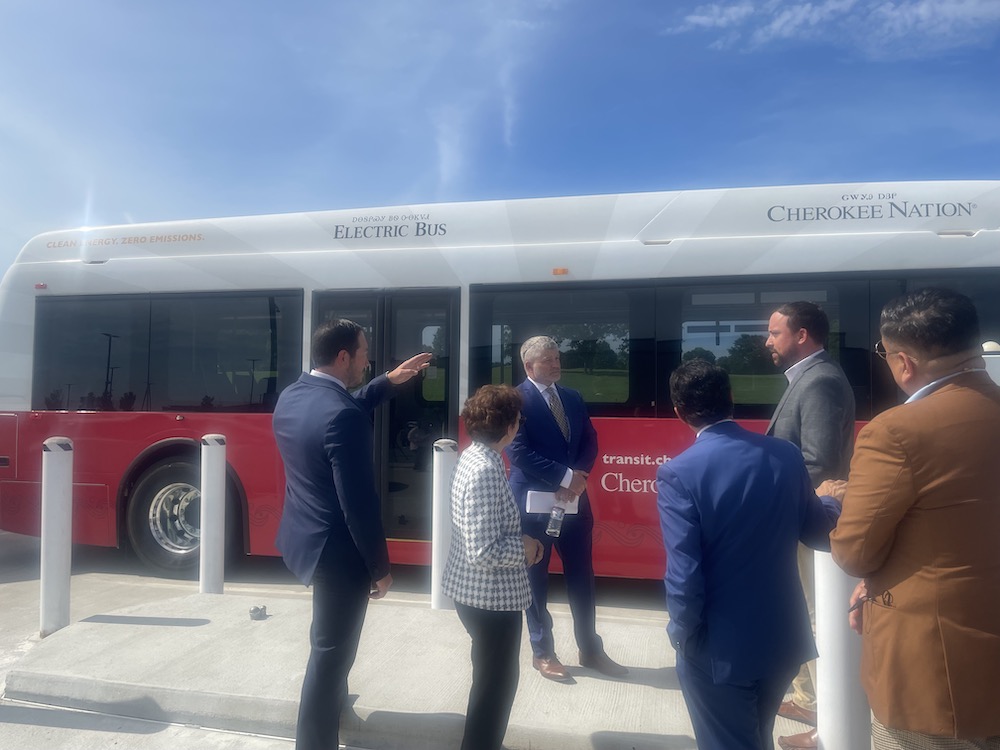 Cherokee Nation recently purchased two electric buses and installed electric canopies as part of its effort to reduce its carbon footprint, according to Chief Chuck Hoskin, Jr.  (Photo: Levi Rickert for Native News Online) Immediately after signing the agreement, tribal officials provided Trottenberg and other DOT officials a tour of its new EV charging station outside of the casino, as well as the new electric buses.

The Cherokee Nation built one of the first solar canopies in Oklahoma at its headquarters in Tahlequah. The structure is used to charge Cherokee Nation’s electric fleet vehicles and the rising number of electric cars driven by staff and visitors to its tribal complex.

The tribe has two electric transit buses and new charging stations that were purchased through a $1.5 million U.S. Department of Transportation grant awarded to the tribe in 2018, as part of Cherokee Nation’s ongoing effort to reduce its carbon footprint. It also has an electric school bus.