WINDOW ROCK, Ariz. — The tremendous contributions of a group of brave young men who went away to fight in World War II are being recognized today — National Navajo Code Talkers Day — on the Navajo Nation.

Typically, a celebration to honor the Navajo Code Talkers would take place in Window Rock, Ariz., the capital city of the Navajo Nation, but because of the COVID-19 pandemic the celebration will take place virtually.

“We pay tribute to all of the Navajo Code Talkers for their courageous service in World War II. At the time of their enlistment, they were very young men, but they answered the call of duty and unknowingly built a legacy for the Navajo people that is recognized throughout the world. By using our Navajo language to help win the war and protect the freedom that we have today, they set an example for us all. Although many have gone on to their final resting place, their actions and everything they stood for have lasting impacts on us all. Today, we are blessed to have four Navajo Code Talkers remaining with us including Samuel F. Sandoval, Thomas H. Begay, John Kinsel Sr., and former Chairman of the Navajo Nation Peter MacDonald, Sr.,” President Nez said.

It was during World War II, in the South Pacific theater, the Navajo Code Talkers used a secret code that was never broken by the Japanese that enabled the United States military to communicate with each other to ensure victory. 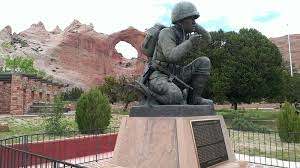 Prior to the Navajo Code Talkers entry into the South Pacific theater, the Japanese were quite proficient in breaking into U.S. military radio communications and transmissions to decipher the military codes.

To counter this weakness in communication, 29 Navajo men, some still in their teens, were recruited by the U.S. Marine Corps. They travelled to Camp Pendleton, north of San Diego, to develop the code that relied on the Navajo language. The code was 17 pages long and the Navajo Marines had to memorize it prior to going into battle. After several weeks of training, they were shipped out to fight in the South Pacific.

By the end of World War II, over the course of a few years, more than 400 Navajo men were recruited and trained in the area of communications. During the war, they were not yet called Navajo Code Talkers.

Their valiant contributions were credited with saving countless American soldiers. Their efforts allowed the United States to an early Allied victory in the South Pacific.

"Were it not for the Navajos, the Marines would not have taken Iwo Jima,” commented Major Howard M. Conner, 5th Marine Division Signal Officer, who was stationed in Iwo Jima.

Recognition and honor for their gallantry came later in their lives. In 1982, President Ronald Reagan called for National Navajo Code Talkers Day to be recognized every Aug. 14 for the service and contributions of the brave Navajo Marines during World War II.

In July 2001, at the National Capitol Rotunda, President George W. Bush awarded the Congressional Gold Medals to the first 29 Navajo Code Talkers, or their surviving spouses or children.

In November 2001 at the Navajo Nation capital of Window Rock, the Congressional Silver Medals were awarded to the rest of the Navajo Code Talkers. By that time many of the Code Talkers had passed away.

Many of the Navajo Code Talkers have passed on never knowing of the honor a grateful nation has bestowed upon them. For that reason, it is proper the nation remembers their vast contributions and service to this country every National Navajo Code Talkers Day on Aug. 14.