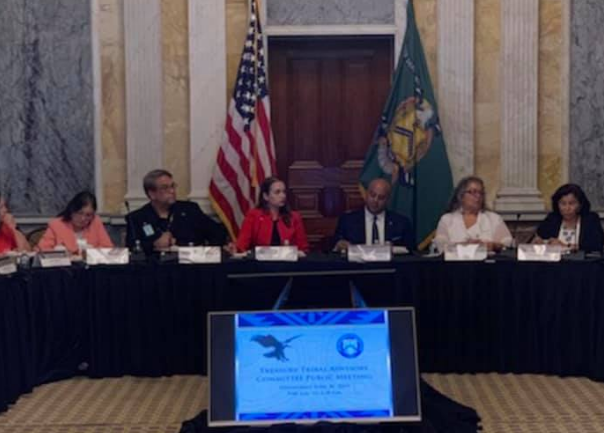 WASHINGTON — While the pandemic has thwarted face-to-face meetings in regards to federal agencies, the Treasury Tribal Advisory Committee (TTAC) met virtually for its quarterly meeting Wednesday, Sept. 16, 2020,  to continue its mission to provide recommendations to the Department of Treasury.

The TTAC is an independent advisory committee that directly advises the Secretary of Treasury on significant matters relating to the taxation of American Indians, the training of Internal Revenue Service field agents, and the provisions of training and technical assistance to Native American financial officers.

More than 100 people watched the online meeting as the TTAC, Treasury and IRS staff were joined by tribal representatives throughout Indian Country. Viewers heard various TTAC subcommittee reports focused on the overall components of the General Welfare Exclusion Act (GWEA), dual taxation and tribal pension programs. This also provided a forum for tribal leaders to advocate and express policy recommendations that directly affect the Treasury Dept.

TTAC Chairwoman Lacey Horn (Cherokee Nation) thanked the participants and said she appreciated the issues and solutions that were outlined.

Wednesday’s meeting demonstrated that the TTAC has continued to work hard to develop a clearinghouse to support programs that benefit the general welfare of tribes.

Implementation of general welfare programs by tribes using the framework identified by the GWEA have varied but allow these benefits to support the general welfare of tribal citizens.

“Whereas, this does not replace tribal consultation, it enhances the platform to support tribes to exercise their sovereignty and find solutions that work in their best interest,” TTAC Vice Chairman Eugene Magnuson (Pokagon Band of Potawatomi) said.

Another important role the TTAC is charged with is advising the Treasury Dept. on tax-related issues and other items directly connected to the TTAC charter under the General Welfare Exclusion Act.

“Using the GWEA will allow an appropriate framework to build on new and existing programs developed by tribes. The GWEA states that recommendations will be in the best interest of tribes,” TTAC Policy Advisor Eric S. Trevan (Match-E-be-Nash-She-Wish Band of Pottawatomi Indian) stated. “It is only natural that tribes make decisions in their best interest.”

Individuals that are appointed to the TTAC are directed through the GWEA framework, including a variety of congressional committees and cabinet approvals. Policy advisors have been appointed through the TTAC and serve in a varied capacity on different strategic and policy initiatives.

TTAC member, Ron Allen, chairman of the Jamestown S’Klallam Tribe encouraged tribes to work with the TTAC on any issue, including CARES Act issues.

“The TTAC advocates for the tribe’s unique relationship and how to engage responsibly and respectfully,” Allen commented. “Treasury should look at the relationship with the tribes with a broad concept, not a narrow focus.”

The TTAC accepted and approved a work plan submitted by the Pension Subcommittee to move forward with a survey administered by Trevan, in partnership with California State University San Marcos.