Levi Rickert was an unlikely publisher when he founded the digital publication Native News Online nearly 10 years ago. 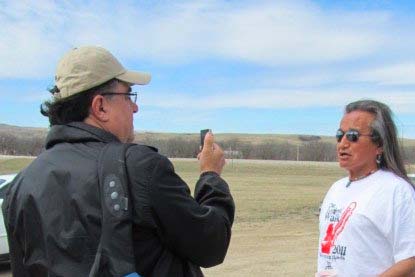 A former franchise restaurant owner, mortgage banker and community leader, Rickert had virtually no experience as a working journalist or blogger in 2011. He had never sold advertising, run a website or even started a social media account.

Still, as a citizen of the Prairie Band Potawatomi tribe and former executive director of an urban American Indian center, he was painfully aware of the lack of media coverage about issues that affect Native Americans. There is a considerable hole in news coverage about the social, economic, cultural and policy issues that affect the Native American community — also known as “Indian Country.”

In starting Native News Online, Rickert wanted to fill that hole with high-quality journalism that would inspire, uplift and inform members of the 574 federally recognized American Indian and Alaska Native tribes throughout the country.

The first week Native News Online went live, the website had 16 visitors. “Most of them were my family and friends,” he says half-jokingly.

Fast forward a decade: On Feb. 15, 2021, Native News Online will celebrate its 10th anniversary. Since its humble launch a decade ago, the online publication has become one of the country’s most-read news sites covering Indian Country. The site draws more than 250,000 readers each month, and its social media following has grown to nearly half a million active and engaged readers.

The growth has not come easily or quickly. For nine of the past 10 years, Rickert mostly ran Native News Online as a one-man shop where he did everything, traveling around the country to reservations and tribal events, reporting and writing, editing stories from volunteers, taking photos and posting articles online. He sold advertising, invoiced clients and wrote checks to pay his website developer and hosting company. Most of his work was done after hours and on weekends, between his full-time job working with tribes on special projects.

While ad sales and the occasional donation weren’t enough for him to make a living, the publication did allow him to deliver news to Native Americans about some of the most consequential issues and events of the past decade.

In 2016, he traveled to Standing Rock to cover the resistance to the Dakota Access Pipeline that brought together thousands of Native Americans from more than 350 different tribes. He reported dozens of stories on Missing and Murdered Indigenous Women (MMIW), chronicling the crisis that took thousands of lives and saw the risk of murder for American Indian women soar to 10 times the national average.

With the goal of improving the business side and taking the editorial operations to a higher level, Rickert began conversations in 2019 with Brian Edwards, an entrepreneur and owner of a Michigan-based publishing firm.

On Jan. 1, 2020, after several months of planning, Rickert and Edwards co-founded Indian Country Media, LLC (ICM) with a plan to upgrade Native News Online and spin off the business coverage into a new digital publication called Tribal Business News.  The publications would be the flagships in their shared vision to “change the narrative” about Indian Country and to tell the stories that matter most to Native people.

“We’re trying to change the narrative about who we are as people and try to give a more accurate portrayal,” Rickert said.

Then in March 2020, the COVID-19 pandemic struck. The team accelerated their efforts to produce daily journalism about the deadly virus’s disproportionate effect in Indian Country, as the death toll rose and the closure of Native-owned businesses and casinos devastated tribal economies.

They launched their advertising sales effort and overhauled the decade-old Native News Online website to offer a better experience for readers. They launched a daily newsletter, which drew more than 3,000 subscribers in the first few months, and increased their editorial output with Rickert, Edwards and an intern writing stories about the impact of COVID-19 across Indian Country. They even recruited their newly installed ad sales manager, a former journalist, to write several “good news” feature stories about Native arts and culture, film and music each week.

In April 2020, Native News Online received word that it had been chosen to receive a $97,000 grant from the Facebook Journalism Project. The company used the funds to hire an award-winning Indigenous journalist as a full-time managing editor and to contract with a half-dozen freelance journalists to provide more extensive news coverage about how COVID-19 had affected Native communities.

The new hires allowed Rickert and company to spend more time on revenue-building efforts, including the introduction of new sponsored content and paid post programs, as well as reader subscriptions, donations and sponsorships.

“We’re trying to build the company so that it has a variety of revenue sources, rather than the traditional advertising-based model,” Rickert said. “Our challenge in 2021 is to balance the growth of our newsroom with the growth of our revenue-producing operations. In the end, that’s the best way for us to build a sustainable business that can serve Indian Country for generations.”

“Native News Online has been an invaluable source of news and commentary on all things related to Indian Country, and in particular Native and tribally-owned businesses,” Chris James, CEO and president of the National Center for American Indian Enterprise. “Native News Online and Levi Rickert have been a constant presence at the Reservation Economic summit and other National Center events over the years. Their work has highlighted the good news in our community and the challenges we face now and in the future. The National Center congratulates Native News Online for 10 years of success and looks forward to working with the publication in the years ahead.”

Sherry L. Rupert, CEO of the American Indian Alaska Native Tourism Association, offered her thoughts: “From a tiny operation of just 16 readers when it started ten years ago, Native News Online has grown to almost five million-page views this past year. The site is the very embodiment of the importance of following your dreams—something we always encourage with our Native tourism partners. Native News Online is an unbiased source of information on the happenings and events that are critical to Native peoples across the country and we congratulate Levi Rickert on ten years of successful news coverage.”

“Congratulations to our 'Unsung Hero' Levi Rickert and the outstanding Native News Online team on their 10th anniversary. We remain inspired by your tireless effort to be a trusted voice to and for Indian country,” said David Morgan, co-Founder and President of the national Multicultural Media Correspondents Association.