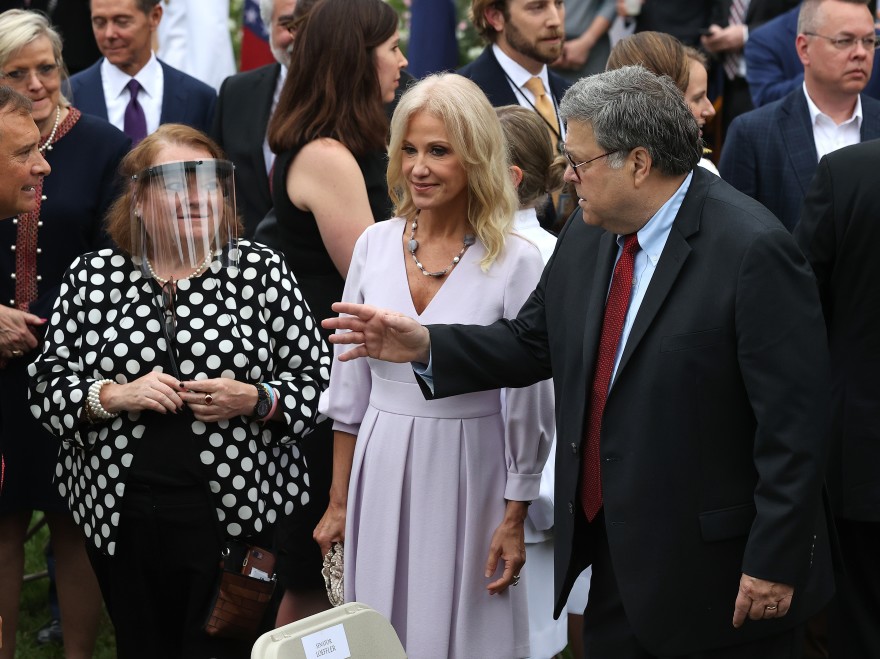 TAHLEQUAH, Okla. — U.S. Attorney William Barr visited the capital of the Cherokee Nation this past Thursday, only five days after sitting in the White House’s Rose Garden where some eight attendees have been diagnosed with the deadly Covid-19.

On Sunday, the Cherokee Nation told Native News Online it has engaged its public health contact tracing team who has advised there seems to have been minimal risk of exposure during US Attorney General Barr’s visit.

Barr was in Tahlequah to take part in a roundtable with Cherokee Nation Principal Chief Chuck Hoskin, Jr., the tribal nation’s Attorney General Sara Hill, Brian Kuester, U.S. attorney for the Eastern District of Oklahoma and Trent Shores, U.S. attorney for the Northern District of Oklahoma. The roundtable’s discussion centered on how the Cherokee Nation will move forward in the aftermath of the U.S. Supreme Court’s historic July 9 ruling that declared the eastern portion of the state of Oklahoma to tribal jurisdiction in legal matters.

“It is very encouraging when leaders from Washington, D.C., visit Indian Country to see firsthand the great work the tribal nations are doing, and also to hear some of the challenges we are facing,” Hoskin said of the meeting. 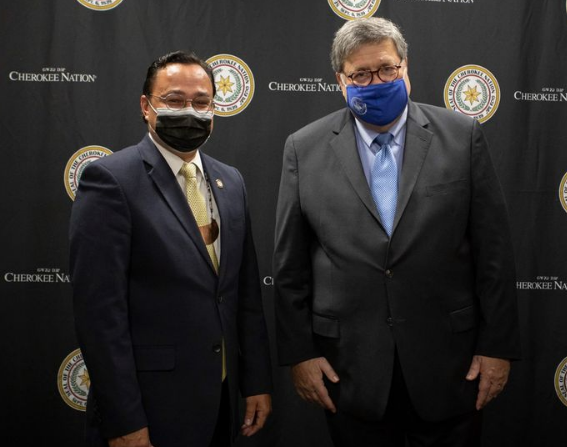 Since Barr’s visit, the nation has learned President Trump and his wife, Melania, have contracted Covid-19. While it has not been determined or disclosed how the Trumps got the virus, speculation has centered on the Rose Garden ceremony where Trump nominated Appeals Judge Amy Coney Barrett to the Supreme Court because eight of the attendees have since been diagnosed with Covid-19.

Barr sat in the front row during the Rose Garden announcement and intermingled with some of the guests who have since tested positive for Covid-19.

According to Kerri Kupec, spokesperson for the U.S. Dept. of Justice, who tweeted on Sunday night, 9:14 p.m., Barr has tested negative for Covid-19 four times since Friday. Barr, who has vacillated on quarantining, reportedly will be back to his office on Wednesday.

Photographs of the roundtable show Barr wearing a protective facial mask, along with Cherokee leaders, during his visit to the Cherokee Nation.

The Cherokee Nation has also been in contact with federal officials travelling with Barr that have, as of late Saturday, reported negative for Covid-19.

“Cherokee Nation leads the country in COVID response, including longstanding safety measures such as mask requirements. Those measures were in place and enforced during Attorney General Barr’s visit,” Cherokee Nation Vice President of Government Relations Kim Teehee said. “Based on the totality of these efforts, we feel confident that the risk of exposure was minimal. But, the individuals who participated in meetings with General Barr will continue to monitor their health in the coming days and our public health team will continue to remain engaged and advise on this topic.”

The Cherokee Nation has had a mask mandate in place since May and leaders remained masked and social distanced during the Thursday announcement and roundtable.