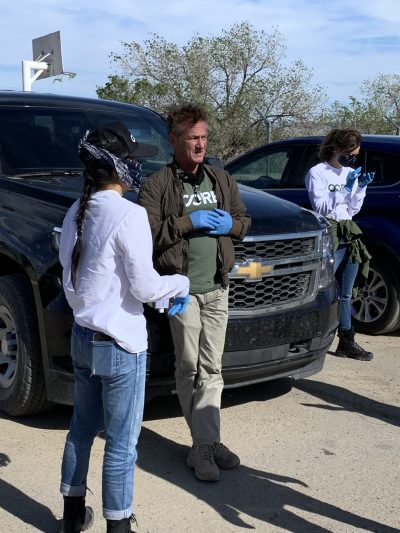 MEXICAN SPRINGS, N.M. — There was some rare good news on the Navajo Nation coronavirus front on Friday.

New cases were down by more than half, nobody died, and four more people recovered.

Besides that, Navajo Nation President Jonathan Nez welcomed some celebrity reinforcements as he handed out food and water at tiny Mexican Springs Chapter, population 1,418 at the last Census (and it looked like every one of them was in line in their vehicles).

Actor Sean Penn, who had toured some of the Arizona side of the reservation last month, showed up with a crew from his Community Organized Relief Effort and its partner in this fight, Johns Hopkins Center for American Indian Health, to announce they would be donating 30,000 COVID-19 test kits to Navajo.

And celebrity chef José Andrés, who has a habit of appearing at disaster sites to sling nutritious meals for the hungry masses, was schlepping boxes of donated veggies into the backs of SUVs just four hours after getting off a plane from Washington, D.C. 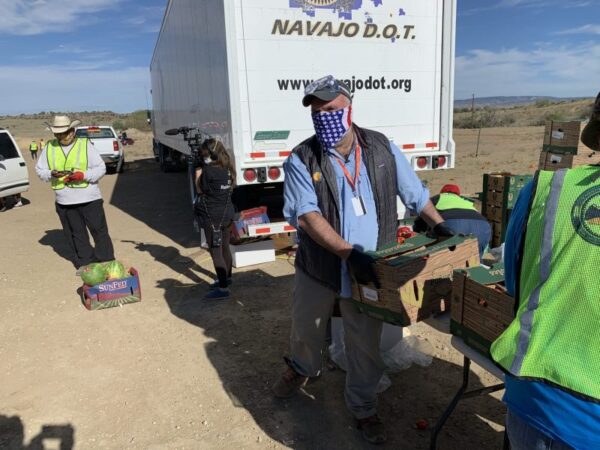 The Spanish-American chef said WCK generally travels to “things like hurricanes and volcanoes,” but has turned its attention to COVID-19 relief since February, when his volunteers prepared 18,000 meals for tourists and crew stuck inside the quarantined Diamond Princess.

The out-of-town celebrities were joined by a quasi-local, Emma Robbins of Tuba City, Arizona, head of the Navajo Water Project for water non-profit Dig Deep. Robbins said the group would be delivering 248,000 one-gallon water bottles donated by Nestle and filling up people’s water tanks. So far they’ve served about 30,000 people in about 20 chapters. The project also hopes to start building bathroom additions.

President Jonathan Nez, who was on his fourth chapter food delivery that day, said he was grateful for the help from outside donors, particularly Santa Cruz County, Arizona, which had once again donated a truckload of farm-fresh tomatoes, zucchini, onions and bell peppers.

“If we’re going to address the coronavirus pandemic on our Nation, we also have to address the other pandemic, which is diabetes,” said Nez as he packed food boxes to be stacked in the back of residents’ vehicles. “I was noticing some of the other groups’ food boxes were full of things like white flour and cereal, so I put out a call for fresh produce, and one of the county supervisors in Santa Cruz arranged it.”

Seventy-four-year-old Phillip Tsosie was third in line for the groceries, having waited about two hours in his vehicle.

“My sister told me about this free food,” he said. “It’s good for me, because I was low on food, and I’ve been trying to stay away from the stores. I don’t plan to get the COVID.”

The total number of confirmed COVID-19 cases on the Navajo Nation climbed by 108 to 3,740 — more than one in 50 Navajos living on the reservation — today, with deaths remaining at 127 and 519 people considered recovered. For details, see https://navajotimes.com/coronavirus-updates/covid-19-across-the-navajo-nation/

Donate
Free Newsletter
About The Author
Author: Cindy YurthEmail: This email address is being protected from spambots. You need JavaScript enabled to view it.
Breaking News