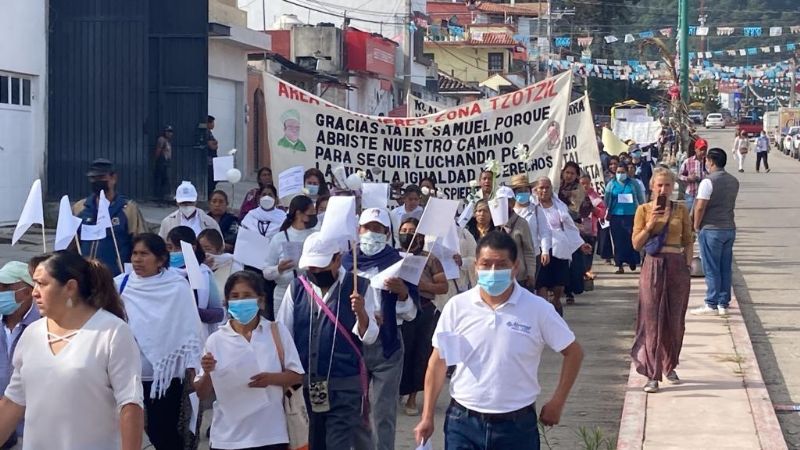 Thousands of parishioners from the Diocese of San Cristóbal de Las Casas ask for an end to the wave of violence that plagues the communities of the Altos, Selva and Fronteriza regions.

SAN CRISTÓBAL DE LAS CASAS; Shh. (appro).- One year after the assassination of the activist and human rights defender Simón Pedro Pérez López, thousands of parishioners of the Diocese of San Cristóbal de Las Casas, mobilized in six municipalities of the state of Chiapas to demand justice, pray for peace, and ask for an end to the wave of violence that plagues the communities of the Altos, Selva and Fronteriza regions of the entity.

This piece was originally published by Proceso on July 6. Republished in English by Native News Online with permission.

In addition they demand an end to the persecution against activists, human rights defenders, and pastoral agents of this Diocese, such as in the case of the parish priest Marcelo Pérez Pérez, for whom the State Attorney General's Office (FGE) requested an arrest warrant from a control judge for prosecution, for his alleged involvement in the disappearance of 21 people in Pantelhó.

In addition to San Cristóbal de Las Casas, parishioners from Chilón, Comitán, Tenejapa, Simojovel, and Comitán, went out in procession this Tuesday to demand justice for the Tsotsil Indigenous activist shot to death on July 5, 2021 in the heart of the town of Simojovel.

They denounced that one year after the murder of Simón Pedro Pérez López, "the circumstances of criminal violence have worsened drastically, we live in a convulsed state, contracted in its governmental and state functions."

They recalled that Simón Pedro Pérez López was born, grew up and lived in Nuevo Israelita, a community north of the municipality of Simojovel and that until he was 40 years old, when his life was cut short, he gave his life and work to the construction of peace and the word of God in the different towns and communities of Chenalhó, Pantelhó and Simojovel.

They pointed out that today, like a year ago, "violence looms in Chiapas and resonates in the Los Altos region like never before."

And that community division, multiplication of armed groups, organized crime entrenched in political structures, diffuse actors exercising territorial, political and economic control in the region. And that on July 5, 2021 "they wanted to erase with terror, violence and fear, the dignified voice of the peoples who organize against the reality of death."

“Today, the conditions have worsened, the justice system in Chiapas intimidates and criminalizes defenders of human rights, land and territory, as has happened with the five defenders of San Juan Cancuc who oppose the militarization of its territory and the imposition of megaprojects in its territory, and the recent request for an arrest warrant against defender Marcelo Pérez Pérez, issued by the State Attorney General's Office on June 21, 2022, which is directly linked to their actions of walking peace and taking care of the house in the Altos de Chiapas region,” they said in a statement read in the plaza of the San Cristóbal de Las Casas cathedral.

They denounced that this environment of judicial harassment and criminalization, "of which the state government is an accomplice, does nothing more than fuel the desire for a good, dignified life and to continue building paths for peace."

Members of the Fray Bartolomé de Las Casas Human Rights Center (Frayba), denounced that there is today as a year ago when Simón Pedro was assassinated, "a context of the proliferation of criminal groups in the region of Los Altos, Norte and Selva border from Chiapas".

They joined today in the commemoration and the actions of the Pueblo Creyente and the Diocese of San Cristóbal de Las Casas, who today make a pilgrimage in Comitán, Tenejapa, Simojovel, San Cristóbal de Las Casas, Chilón and Ocosingo, to strengthen -they said - The hope that renews the spirit and the paths of construction for living in Peace in Chiapas, for the Truth and Justice of Simón Pedro.

The Ajmaq Residence and Rebellion Network also denounced in this context of mobilizations, the harassment against Father Marcelo Pérez Pérez and demanded justice for Simón Pedro.

“We stand in solidarity and respond to the call of the Faithful People of the Diocese for the coordinated pilgrimage in various geographies of Chiapas and convened for July 5, 2022. To unite dignities that make it possible to build those other worlds of life that beat from below and to the left with Mother Earth”, said the members of this network made up of women activists from the Highlands of Chiapas.

They joined, they said, in the pronouncement of the Diocese of San Cristóbal de Las Casas in the face of the “increase in violence in Chiapas and the persecution of defenders of life.”

The civil organization Others Worlds, AC, of ​​the Mexican Network of People Affected by Mining (REMA) said that during this year there is not a day that Simón Pedro has not been remembered and called for justice for his death.

“A year has passed and we continue to demand justice for you and all the defenders who have asked for their lives in the fight for life ironically.  Las Abejas de Acteal do not give up and fight every day in a territory destroyed by all governments and now also by organized crime”, said members of this civil organization.

“This in Chiapas is becoming more violent and chaotic every day; threats, displacement and murders are the reality of families. And the government is only here to implement mega projects of death. But we, your brothers and sisters, continue to fight to defend the mountains that you loved so much,” they pointed out in this pilgrimage.

That is why they joined the demands for true justice and due process in the search for the truth, enough to continue criminalizing and harassing those who fight for a good life and demanded that the federal and state authorities "get to work so that this vile murder is clarified and the material and intellectual authors are found.”

Members of the National Coordinator of Education Workers (CNTE) participated in the contingent, who expressed their support for Father Marcelo Pérez Pérez, who said that he is not going to flee or seek protection because he has not committed any crime.

He pointed out that on July 26, 2021, when the El Machete group detained 21 people who were later disappeared, he was in Simojovel and that he had already declared this before the State Attorney General's Office (FGE).

In fact, when he arrived in Pantelhó on July 27, 2021, he not only did not encourage but also stopped El Machete from detaining more people and burning their houses as they had done the day before.

Men, women, boys, girls, the elderly, marched in this procession with white flags, with the Mexican flag, with their religious images, they sang religious songs, they shouted cheers for Father Marcelo and justice for Simón Padre.