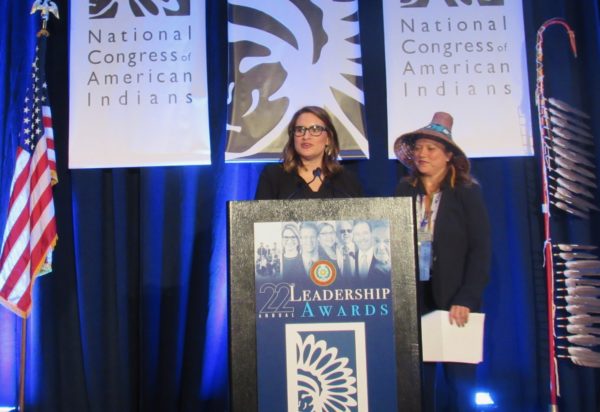 WASHINGTON, D.C. — There was a lot of love in the presidential ballroom at the Capital Hilton in Washington, D.C. on Tuesday evening as the National Congress of American Indians held its 22nd Annual Leadership Awards banquet. 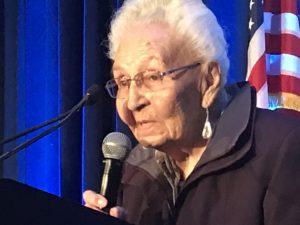 “The Leadership Awards Ceremony is one small way we can show our appreciation for those who have committed tremendous service to tribal communities,” said NCAI President Fawn Sharp.

Due to a previous commitment and unable to attend the Tuesday evening banquet, Sen. Tom Udall, who serves as vice chairman of the U.S. Senate Committee on Indian Affairs was presented with his award during the NCAI general session on Tuesday afternoon.

Throughout Tuesday evening’s banquet, there were several special moments. One came when Minnesota Lt. Gov. Flanagan dedicated her award to her late father, who passed away just over two weeks ago. Another highlight was when Nedra Darling, a long-time director of public affairs for the Office of the Assistant Secretary for Indian Affairs at the  U.S. Department of the Interior recounted how she first arrived in Washington, D.C. to work as an intern and ended working for the federal government for several decades.

The last recipient of the evening was 100-year-old Marcella Lebeau, who served as a nurse during the Battle of the Bulge during World War II. She told a moving story of having treated a soldier, a tribal citizen of the Rosebud Sioux Tribe, who lost both of his legs during the war and then meeting him some forty years later.

Even at 100-years ago, Lebeau is still working to have the medals of honor rescinded of those U.S. Calvary servicemen who participated in the 1890 Wounded Knee Massacre that left close to 300 Lakota men, women and children dead. She was instrumental in getting the Remove the Stain Act introduced in Congress.

Every year, the NCAI recognizes leadership in five award categories, including: Public Sector, Native American, Government, Congressional, and Special Recognition. This year’s honorees are below:

Lt. Governor Flanagan is recognized for her distinguished and now historic career of service and raising awareness about tribal nations, issues, and policy priorities, and civic engagement – first as a state representative and now as the first Native woman to serve as a state’s lieutenant governor.

Representative Kilmer was instrumental in pushing for the “Broken Promises” report, and has been a staunch proponent in Congress for pro-tribal sovereignty laws and policies. 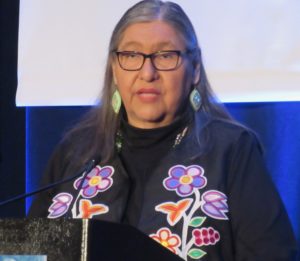 For many years, Darling played an instrumental role in informing and guiding the federal government’s administration of its trust responsibility to tribal nations across multiple presidential administrations, and has served as mentor to many young Native professionals.

Senator Udall has been a tireless advocate for Indian Country, sponsoring or co-sponsoring many key pieces of pro-tribal legislation. 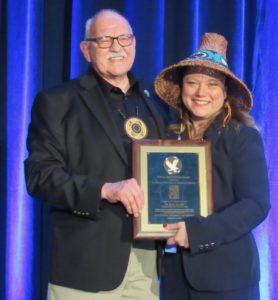 Chairman W. Ron Allen has been a leader in Indian Country for decades. His leadership covers all areas of the country from being the Chairman of Jamestown S’Klallam Tribe for over 40 years to being elected to the NCAI Board as President, First Vice President, and Treasurer (most recent) and serving on a number of other boards and leadership positions to help address a variety of issues important to Indian Country such as the budget, fisheries, and government parity. 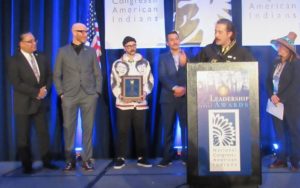 Known for the mega-hit song, “Feel it Still,” Portugal. The Man has shown continued support for America’s Indigenous people beginning with dedicating their Grammy win to the Native youth in the villages of Shishmaref, Barrow and Bethel, Alaska and throughout their national tour by raising visibility and awareness to Native issues and Native people, including land acknowledgements, performances and speeches by local tribal artists, tribal leaders, and activists.