‘You go all in’: Diné composer from Chinle wins Pulitzer for music 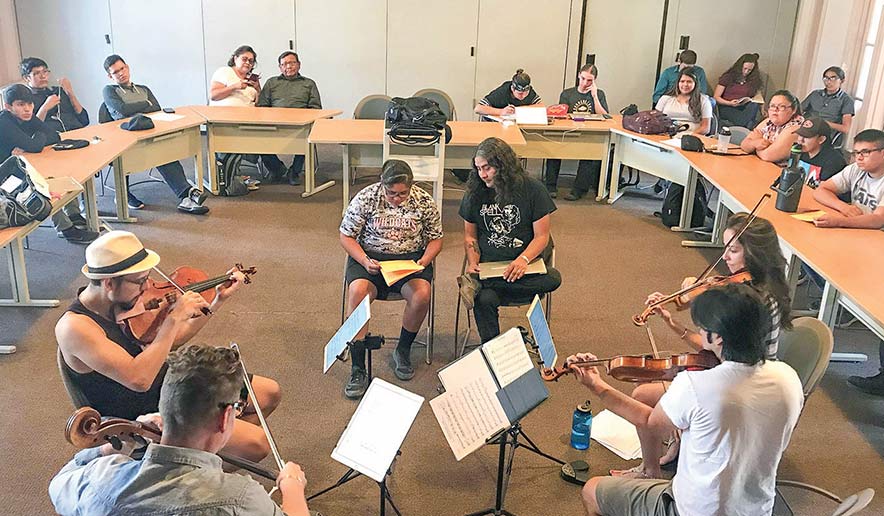 The composition is a rousing, discordant, and sometimes eerie invocation of the unheard – past and present – whose voices have been silenced.

The Pulitzer Prize Board called the piece “a mesmerizing, original work… that evokes the weight of history in a church setting, a concentrated and powerful musical expression with a haunting visceral impact.”

Chacon said he was surprised to learn that he won the award when he was on travel and his phone blew up with messages of congratulations.

“People were saying I won the Pulitzer,” he told Navajo Times. “I was unaware that an announcement was coming.” 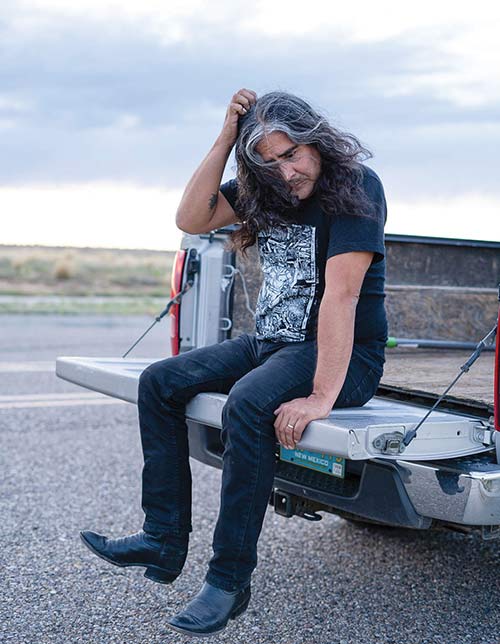 Chacon, 44, is the first Native American to be awarded the Pulitzer for music.

“Not only was I not expecting myself to win – not in my wildest dreams,” he said, “but I would have been equally excited and grateful for there to ever be a Pulitzer music winner who was Native.”

Commissioned by the United Church of Christ and Present Music, Chacon composed “Voiceless Mass” for the pipe organ at the Cathedral of St. John the Evangelist in Milwaukee, where it was performed on Thanksgiving, Nov. 21, 2021.

“As an Indigenous artist, I make a point not to present my work on this holiday but, in this case, I made an exception,” said Chacon. “This work considers the spaces in which we gather, the history of access of these spaces, and the land upon which these buildings sit.”

The piece features wind and string instruments but has no singing voices that might make up a typical church mass choir, adding to its other-worldly aura.

“In exploiting the architecture of the cathedral, ‘Voiceless Mass’ considers the futility of giving voice to the voiceless, when ceding space is never an option for those in power,” said Chacon.

‘The world was quiet’

Like many of Chacon’s previous collaborative works that have earned critical acclaim, including the Manifest Destiny opera “Sweet Land,” a “future creation story” “The Journey of the Horizontal People,” and monumental art installations like the two-mile “Repellent Fence,” Chacon uses artistic expression to disrupt and deconstruct false narratives in history, especially for Indigenous and other peoples who have been marginalized in the path of conquest and colonization.

Chacon said when he worked on “Voiceless Mass” during the COVID-19 lockdown, the world itself had become still and fragmented in the wake of the pandemic.

“I was definitely thinking about this global shared experience that we were undergoing,” said Chacon. “The world was quiet when I was writing this.”

At the same time, attention was brought to injustices through protests like Black Lives Matter and more information was coming out about the suppression of information pertaining to residential boarding schools.

“It also got me thinking back to Standing Rock when there was an urgency that was being called out to the rest of the world about this ecological encroachment,” he said. “And the world not taking notice until there was a critical mass of people to spread that word.”

The dissonance heard in “Voiceless Mass” is a hallmark of Chacon’s style which, regardless of medium, denotes unresolved injustices, incongruencies, misdeeds and their consequences that live on in the silence of the collective conscience.

“As it relates to ‘Voiceless Mass,’ we think about how history gets suppressed or altered or perverted,” he said. “It is not the true story and as it gets more and more diluted or whitewashed, that itself becomes another way that people aren’t able to voice what happened.”

As a child growing up in Chinle, Chacon says he was exposed to a variety of music.

“In the homes, there was always music being played,” he said. “I remember my parents, aunts and uncles would have the radio on constantly.” 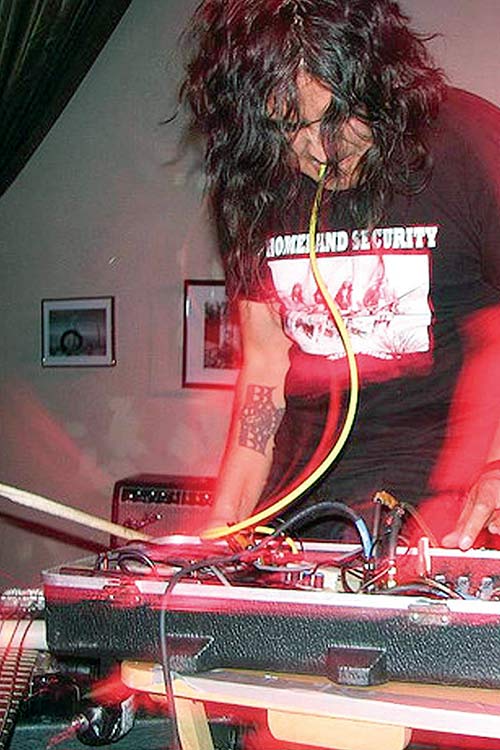 He said he was inspired by everything from metal music to the traditional Navajo songs that his grandfather sang.

“I feel strongly that every music you’ve ever listened to will end up in the music that you write,” he said.

Asked how his Diné upbringing has influenced his music,Chacon simply said, “It’s just who I am.”

When he was about seven years old, his family moved to Albuquerque where he started taking piano lessons, his first entrée into formal music education.

“I was lucky to grow up in a city that had a lot of Native people, but at the same time had other things – access to live music, music education,” he said.
As he grew older, he engaged with the vibrant and diverse performing arts community in Albuquerque as an organizer and performer.

“When you see other people making music, it’s inspiring,” he said. “There was a time when a group of us were gathering and making experimental music together.”

He led a collective of musicians that would gather and put out each other’s recordings, put on concerts, including “on rooftops, or out in the desert,” he said.

“That’s the music community that has inspired me, maybe more than anything, being a contributor to that group of people there,” he said.

Chacon is careful to credit all of the other artists and musicians he worked with along the way.

“I’ve been told that I’m prolific, that I do things in a lot of different areas, but I also credit the people I collaborate with,” he said. “I don’t do all these projects alone.”

When he writes something like “Voiceless Mass,” at a certain point it’s in collaboration with the people who commissioned it and all of the musicians that are playing it.

“When it’s all done, I can just sit and listen and watch,” he said.

He said many of his music compositions are actually designed to be shared experiences for the people who are playing them and sometimes his scores are in the form of a problem or puzzle that’s seeking to be solved.

“I like to make sounds and I like to compose situations for people to gather to make something together,” he said. “Then others will gather to experience that thing that was made.”

He said he’s most interested in the dynamics between the players and what kinds of unexpected sounds and timing might come from their interactions, and his compositions deliberately leave space for that.
“They’re very malleable and they might be a completely different composition in the hands of different performers,” he said.

As a member of the Native American arts collective Postcommodity, Chacon has also developed multi-media installations that have been exhibited internationally.

“Whether making an artwork or gathering to make change in some kind of venue or landscape, it can produce results that are unexpected and greater than intended when you have an organized group of people working together on that goal,” he said.

Chacon says he regularly goes back to Navajo to visit his family and work on a youth mentorship project called the Native American Composer Apprentice Project with fellow composer Michael Begay.

Founded in 2001, project is an outreach program of the Grand Canyon Music Festival dedicated to teaching students on the Navajo and Hopi reservations who want to learn how to compose concert music through an immersive experience.

“That’s brought me often back every year to teach these kids in Chinle, Kayenta, Tuba City and the Hopi High School,” said Chacon.

Each year, Chacon and Begay work with students in partnership with their school music programs to produce original scores that are premiered by professional ensembles.

Chacon is also a member of the faculty at the Institute of American Indian Arts in Santa Fe, where he provides mentorship to master’s program graduate students.

If there is a key to his success beyond his fortitude and talent, Chacon says he works around the clock and barely sleeps.

He said that work ethic comes from his parents, Dr. Gayle Diné Chacon, a former surgeon general of the Navajo Nation, and Lorenzo Chacon, an attorney from Mora, New Mexico.

“My parents told me and my sisters, if you want to do this thing, you go all in,” he said.

In addition to learning by doing since he was a child, Chacon earned a bachelor’s in music from the University of New Mexico and a master’s in music composition from the California Institute of the Arts.

Chacon said even in the times when he needed to work a “day job,” every spare minute was put into his music.

“I think ideas can come out of nowhere,” he said. “You need to be ready to jot them down on a notepad. Then you write a piece of music. That hasn’t stopped.”

He advises that youth on the reservation who are interested in becoming an artist or musician should tell a teacher or a family member.

“I realize some of our schools out there are lacking in funds and equipment, but I think a young person should express their interest in making art or music,” said Chacon. “When people work together, they can find a way to get some kind of instrument or get some paint and brushes to a young person.”

From there, he advises, “Work very hard and live with it – practice every day like I still do today.”

“It’s on to the next project,” he said. “Every extra minute I have goes into doing the work and that’s all that’s needed.”