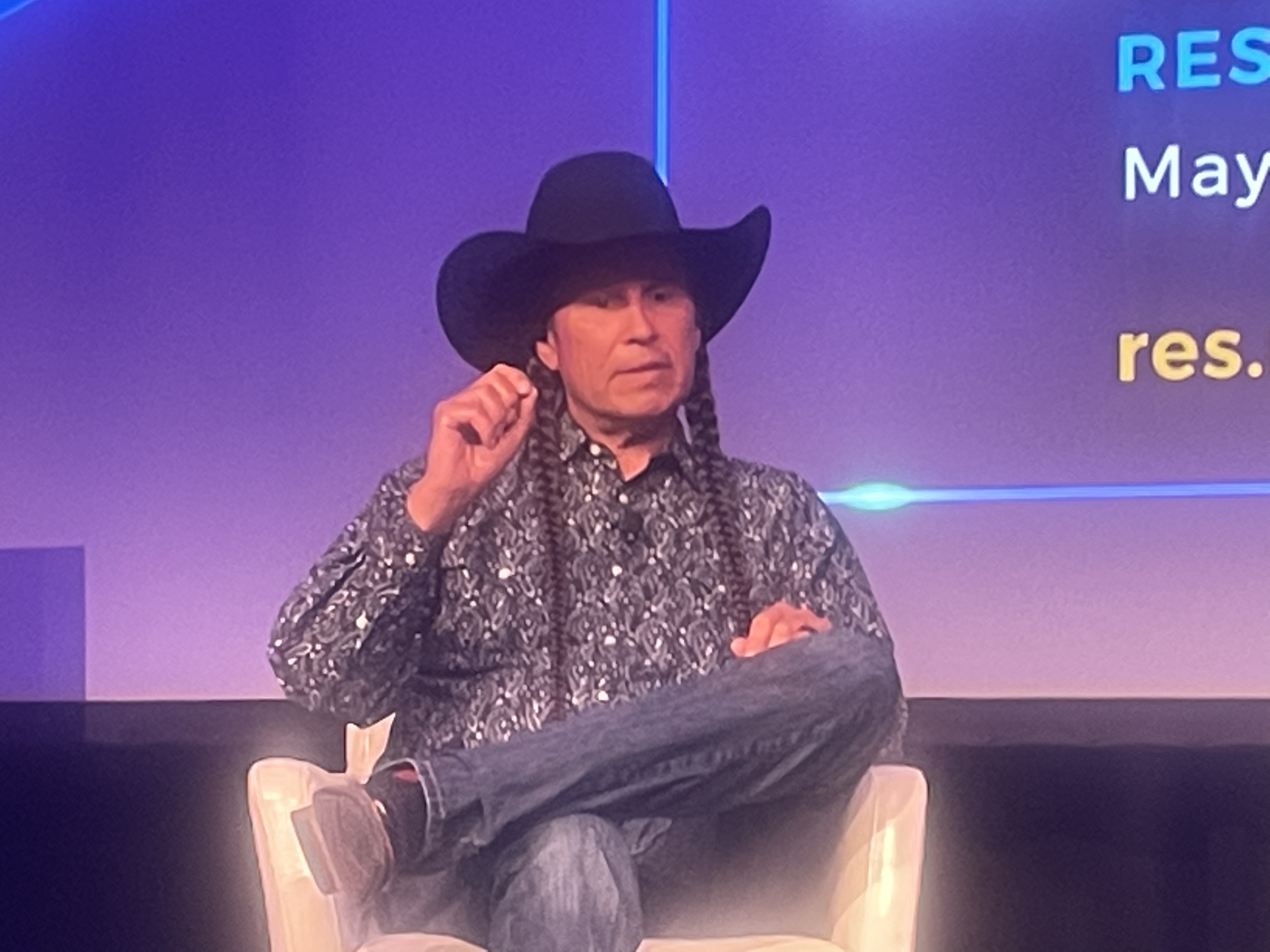 Details
By Levi Rickert and Neely Bardwell
May 28, 2022

When asked about what is next for him, Moses Brings Plenty, wearing his hair in braids with a  black cowboy hat, said: “Yellowstone's going to be kind of hard, tough to top. But in the end, I do have an idea, and my idea has been a dream for a while. I think when the time is right, maybe I'll start pursuing it and make it a reality. And that is to be the next President of the United States.”

His answer pleased the audience that clapped and gave out some whooping sounds.

This on-stage interview by James with Brings Plenty has been edited for clarity and brevity.

CHRIS JAMES: What do you think about how Native Americans have been portrayed historically, and how they are portrayed now? What made you decide to take the role in Yellowstone, and how do you feel like you contribute to the representation of our community?

MOSES BRINGS PLENTY: I took the role because I was going to be the sidekick to another Native who was a tribal chairman. And, of course, Kevin Costner being in a project, who wouldn't? Just before I did take the role, I was contemplating on whether or not I was going to step away from pursuing this anymore.

In fact, I talked to my family and told them what I had in mind, and that I was done with it. I called my agent, and my family and my agent all said, 'Let's just finish up the year. See what happens.’ And then Yellowstone came about and I got the opportunity to work with Gil Birmingham, who was an amazing Native actor. I want to quote a few things from him. And also, of course, Kevin Costner and everyone, all the cast members of that show are absolutely amazing. And so, I'm still a student, you know, but by landing this role, it revitalized and gave me a breath of fresh air to continue on, because what I'm pursuing is much bigger than me. And that is to open, to flat out just rip the doors down and make more opportunities for Indian country to be involved in.

How have you seen some of the representation changes in the media over the years?

I've seen substantial changes in the media today, and we have a lot of good, powerful, strong voices out there who care about our existence, and care about our hopes and the dreams of all of us. I think we're finally heading in the correct direction, and I'm really excited about all of it.

What do you think are some improvements that could be made in the industry?

Well, I think there's a number of things that can be done better from both sides. The one side being that they start to treat us as more of equals as well as our co-stars. I think we're due for some A-List Native actors, not saying me, but you know.

And also, some award-winning directors that have those opportunities. They're great writers, we have great producers, great directors, that are just not given those opportunities and now finally I think we are kind of going in that direction, but I think it can be done so much better. That’s that side.

On our side, I believe that for us to really truly support one another, we have to speak in good terms and good ways about each other as Native people because there is no greater enemy than ourselves. We have to be able to come back together the way that our ancestors used to be and understand and know that if we stand together, we will always be successful. We will always be stronger. But if we mess with each other because of jealousy, the negative competitiveness that that comes up rears its ugly head, and we begin to see negative things about each other. Then we're just setting ourselves backwards versus progressive.

What are some of your most rewarding roles or one of the worst roles to play?

There are several. I got to portray Crazy Horse (and) Sitting Bull. And of course Mo in Yellowstone, so I'm pretty lucky to have played historical figures that were heroes to me like Crazy Horse and Sitting Bull. That was so significant to me because I remember when I was playing Crazy Horse, I was riding a horse, and I was waiting for them to say action. As I was sitting there, I was petting the horse. And it dawned on me because I was looking at my blood veins.

For a long time in my life, I couldn't comprehend why my grandmothers and grandfathers always said ‘They're not gone. They're here. They're here through you.’ And then in that moment it hit me that our ancestors are still here.

They're in our blood veins. That blood is still alive in each and every one of us. It made me feel so much different. It made me look at myself even more to the point from the spiritual perspective that if my life were to end today, would Wakȟáŋ Tȟáŋka, or Creator, or God, or whatever we want to call the higher power within, would they be welcoming to me? And I am doing everything in my power to live in a way that the Great Spirit would want.

How do you sell yourself to stakeholders? Can you talk about how you approach the craft of acting?

It's simple. What it boils down to for me is work ethic. Representation is everything. The industry seems large, but everyone's connected, and if your work ethic (is) not that great then people will talk about it.

So I make it a point to be on time, if not early. I give it 110% regardless. I mean even coming here. This is something huge for our people, what you all do, and I appreciate it, and I'm honored and humbled that you all invited me here to see all these beautiful faces.

It's [acting] a business that we still have to understand, and we have to go and do it with a smile on our face. Love and Compassion are two great values that we need to bring back to life and hold much higher than what we hold onto.

What would be one thing you wish you knew before you started your career? What advice would you give?

Do your homework. Do your homework when it comes to selecting a team that's gonna help you further your career because a team is so important. Today I'm very blessed to have the team that I have.

And the other part too, is culture honestly. Culture is everything. I remember when my grandfather was telling me ‘You can be anything you want to be. Just never forget where you came from and where you are.’ So, culture is the number one driver for me. Because there are sacrifices that have been made for us.

I wanted to see better representation of us on TV and, and have more significant roles and characters. And so, to be able to see the change, you have to be the change. That's something I work hard at.

I didn't know anything about acting. I was born and raised at Pine Ridge Reservation in South Dakota. I grew up with no running water and electricity. I tell you what, those were the best days of my life because it was simple. I grew up in Lakota country because we have relatives on the Cheyenne River reservation and also in Rosebud, so I spent time on three reservations growing up as a kid. And so all my experiences in life, you know, the number one thing that I recall the most was that some folks, especially from society, said, ‘You're not going to get far by being Indian,’ and I was like, ‘wow, I want to change that’. So I became all that I can be, and I want to be more.

You know, whether it's headshots, or acting classes, you can be a great actor, but you still want to always stay on point and fresh. We are the business, and so it can be done.

I'm a reservation kid, through and through. You can take me off the Rez, but you can't take the Rez out of my heart.

What's next for Moses Brings Plenty?

Yellowstone's going to be kind of tough to top. But in the end, I do have an idea, and my idea has been a dream for a while. I think when the time is right, maybe I'll start pursuing it and make it a reality. And that is to be the next President of the United States.

I mean, there's no one saying that I can't do it other than myself and $20 million. I asked how I get my main foot in the hat for the presidency? An individual told me ‘Well, firstly, you’d have to raise $20 million.’ I said ‘Okay, I got a few good horses. I’ll campaign riding on horseback across the country.’ So, if you ever see me on horseback riding across the country, you know what's up.

Any last thoughts to the audience? Any more thoughts about how folks can get to their next level?