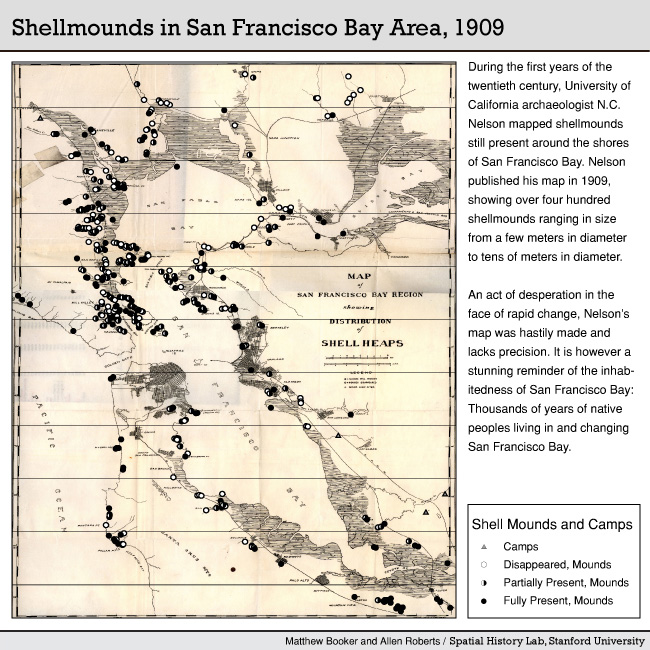 RICHMOND, Calif. — The city of Richmond Arts and Cultural Commission has hired an internationally acclaimed artist to design a memorial that will honor the original peoples of the San Francisco Bay Area.

At the beginning of the 20th century, there were more than 400 shellmounds on the shores of San Francisco Bay. As settlers arrived and industrialization progressed, most of the shellmounds and burial sites dotting the bay region were destroyed or looted, or both.

Located near the former location of an ancient shellmound burial site destroyed during the construction of a freeway overpass, a public art installation to honor the Ohlone people and their ancestors is currently in progress.

Corrina Gould (Lisjan), spokesperson for the Confederated Villages of Lisjan explained that there are multiple Ohlone tribes, but her group has reverted to using their traditional name of Lisjan because “Ohlone” is considered by some to be a generic name created half a century ago by elders who were tired of being called Costanoans, which encompassed all coastal tribes from Martinez down to Monterey Bay.

Gould said she is looking forward to engaging the public about their tribe in the present as well as the past. “We are happy that people who live in our territory with us are now looking toward a working relationship with the tribe and creating cultural spaces that allow us to practice our ceremonies and gatherings,” she said

According to the Richmond Arts and Cultural Commission’s website, public art projects such as this are financed through a city ordinance that requires developers to spend 1.5 percent of the cost of their project on a public art installation.

Gould said it was two members of the Richmond Public Art Committee who conceptualized that the site be dedicated to the Indigenous people of the Bay Area. “It was a beautiful idea that they came up with to honor our relatives,” she said.

The city commissioned internationally known Japanese-American artist Masayuki Nagase to do the project. According to his website, Nagase “explores the expansion of humanity through the intersection of art, nature and community. He has found that the interactive process of public art can be a channel for reclaiming connection and communication for communities.”

In an interview, Nagase described the installation as “the life of Ohlone people with nature,” including themes of earth and the other elements, with features such as a pathway and public use space, raised plant beds for cultural use and large boulders he hand carved with symbols and stories of acorns, native plants, birds, abalone shells and oyster shells symbolic of the lost shellmound.

One large rock, carved in characters provided by the Confederated Villages of Lisjan translates to “water is life” and “we are still here.”

“We wanted to incorporate language and water and animals that would have been there,” Gould said, noting the joy in working with Nagase and his partner Michele Ku, referring to them both as “beautiful human beings.”

After many conversations between Nagase, Gould and other elders, it was decided that, in addition to a memorial for the shellmound, the site should also be useful to living tribal members. As a result, the site plans to include the capacity to grow traditional plants to gather, harvest and use, such as elderberry to make clapper-sticks for ceremony. There will also be a space designated for family cultural events in order to tell the story of both past and present Ohlone people in the community for generations to come.

The Confederated Villages of Lisjan are also working with the city of Berkeley to protect a sacred site and rename Indian Rock, a well known public park. Gould thinks they have an opportunity to do some good within the community and include the people who relocated to their territories in the process.

“It’s taken us over 20 years of doing our work to really get the city to acknowledge that Ohlone people are still here in our home territories,” she said, “and to begin to think about reaching out to us.”