Native American Pro Soccer Player Excited to Be the First, But Not Last 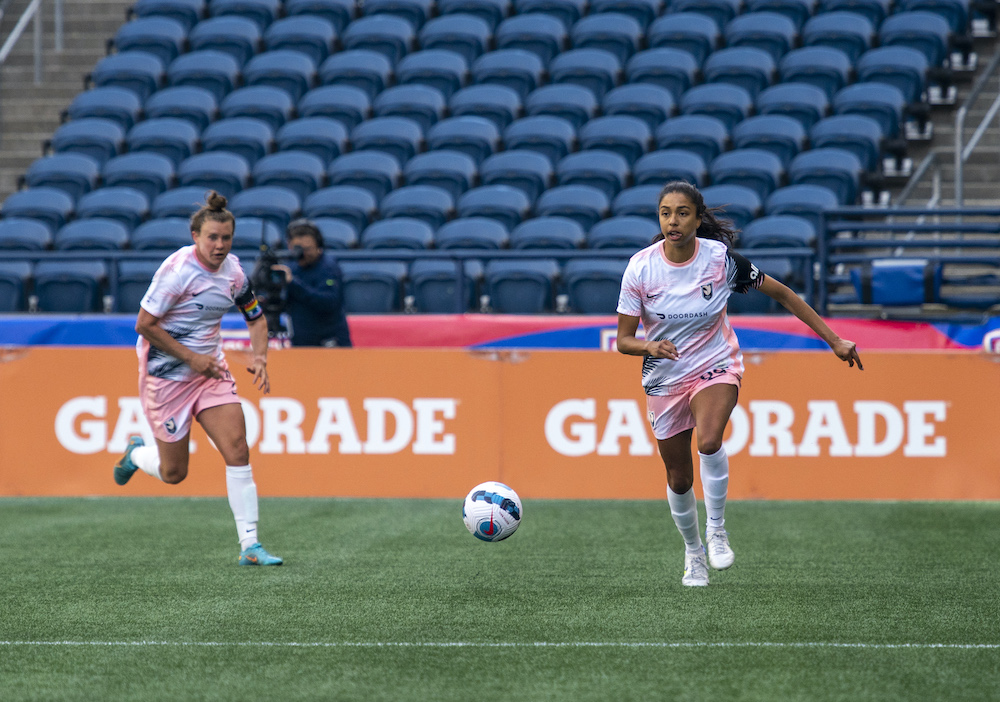 Being the first and only Native American in the National Women’s Soccer League (NWSL) excites Madison Hammond, but there’s something even more compelling to her.

“I’m really excited to be the first Native American to play in the NWSL,” Hammond said, “but I'm more excited not to be the last.”

The third-year pro, a Navajo and San Felipe Pueblo woman, wants to inspire young Native American soccer players to chase their dreams. And she wants them to understand that her own dream-chasing on the soccer pitch has been fueled by strength she draws from her Indigenous ancestry and her Native community.

“For me, my Native ancestry is what gives me strength and resilience to chase whatever dream or goal that I have,” Hammond told Native News Online.

This weekend, Hammond will need all the strength she can muster as her team, Angel City FC, finds itself in a must-win game on the road Sunday.

Angel City lost its final home game to Racing Louisville FC last weekend, putting its playoff hopes in limbo. To make the playoffs, Angel City must win its final regular season game against the Chicago Red Stars on Sunday, and hope that the San Diego Wave must beat the North Carolina Courage on Friday.

“We’ve shown we do deserve to be a playoff team,” Angel City FC Head Coach Freya Coombe said. “I would much rather be in the driver’s seat controlling destiny.”

Adversity is nothing new to Hammond, who broke barriers to get to the NWSL.

When Hammond, 24, made her professional debut with Seattle-based team OL Reign in 2020, she became the first and only Indigenous player in the league. Last March, Hammond was traded to Angel City FC. 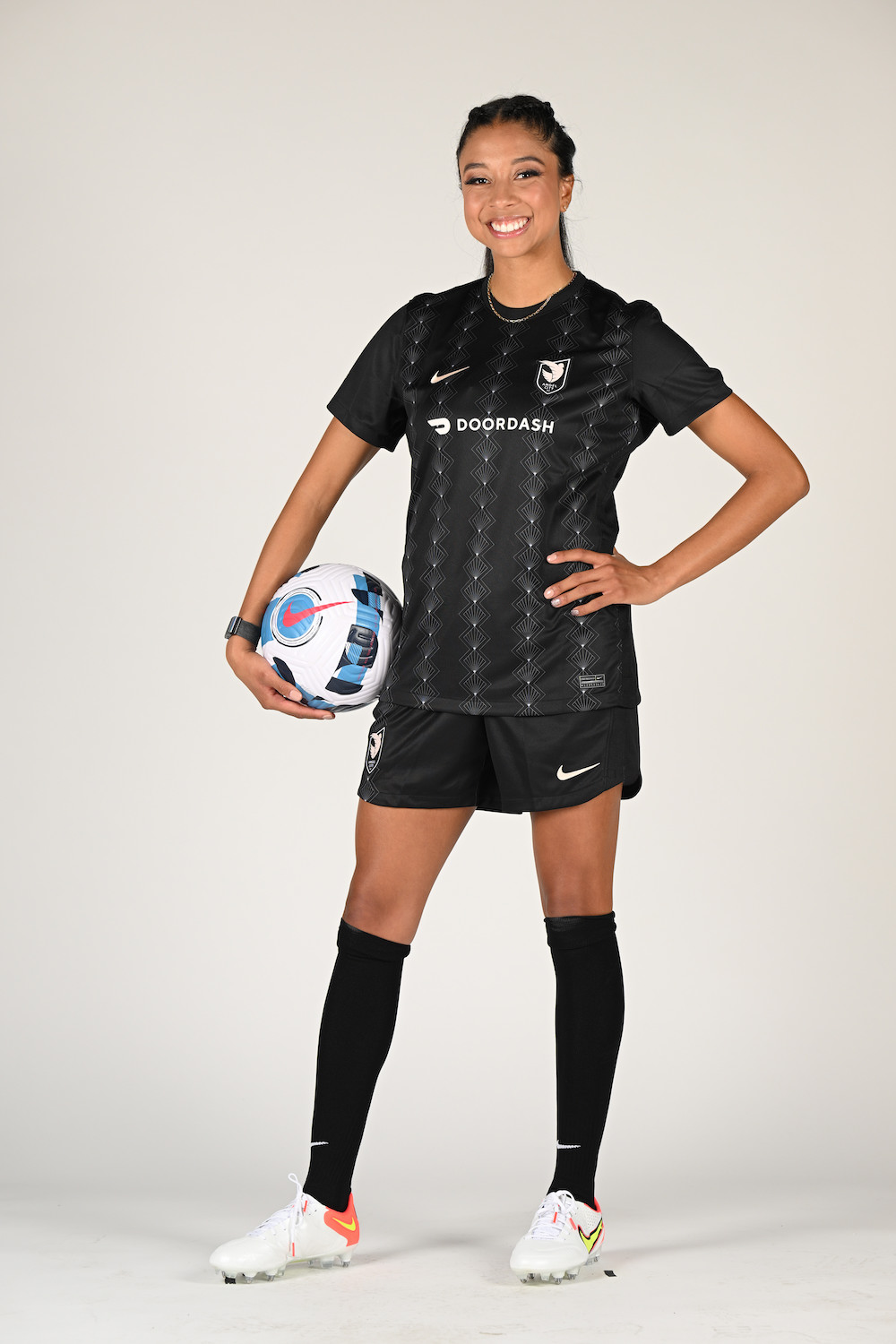 Madison Hammond (Photo: Angel City FC)Since then, Hammond has focused on changing perceptions of what young Indigenous players think about themselves, including breaking perceived barriers.

Known for her speed, toughness, and competitive nature, her Native ancestry is a source of confidence. “There is something intangible in the support I feel from my people and community that helps carry me through the difficulties and triumphs of being a pro athlete,” she said.

The NWSL began its 10th season this year. Angel City FC is in its inaugural year in the league after being founded by actress Natalie Portman. The club is unique: It has the largest female-led ownership group in professional sports, with notable investors including Abby Wambach, Mia Hamm, Serena Williams, and Billie Jean King.

Hammond’s journey to professional soccer began when she was just five in Albuquerque, NM. The family soon relocated to Virginia, where she continued her soccer development. “When I was nine years old, I moved to Alexandria, VA. Once I moved to the East Coast, I definitely lost a lot of those immediate ties because being Native is very involved.”

After high school, Hammond attended Wake Forest University, where she was a four-year starter as a defender. With the Deacons, she was an All-ACC Academic team member for all four years and was named to the Second Team All-ACC during her senior season.

While at Wake Forest, she grew into her sense of self. “That coincided with me taking back my identity and who I knew I was. I leaned back into our culture and just different beliefs that we have and making sure I'm really cognizant of acting those out in my day to day. You don't realize how much strength you draw from your community.”

Hammond is also a part of Nike’s N7 movement. The shoemaker’s N7 Fund, created in 2009, has provided more than $8 million to various Native communities and organizations.  The N7 name of the fund, as well as Nike’s N7 collection of Indigenous-inspired athletic shoes, refers to Native American concept of the Seven Generations.

“Nike N7 is about access to support for Native American Aboriginal youth across North America, as we believe the power of sport can transcend across all cultures and all communities,” general manager and founder of Nike’s N7 Sam McCracken (Sioux and Assiniboine) explains.

This partnership is something Hammond is proud to be part of.

“N7 is the Indigenous fund of Nike that focuses on elevating Indigenous athletes through sport,” Hammond said. “I have been fortunate to feature on a couple of campaigns, including the 2021 Beacon campaign when my family and story were featured on billboards in New York City and Los Angeles.”

As youth soccer continues to grow in the US, there are plenty of Native youths dreaming of becoming professional soccer players. Hammond relishes the opportunity to continue encouraging upcoming generations.

“I hope that my story continues to inspire younger Native soccer players to not be afraid to enter spaces where they don't see people that look like them. For people of color, it can be intimidating to break barriers because there is no specific blueprint for success,” Hammond said.

Being the lone Native player in the league is something special, but younger players need to realize that there will likely be setbacks along the way.

“I hope that any young athlete can recognize in me that the journey isn’t straight and easy, but that's okay,” Hammond added. “Everyone's unique journey is what makes them great.”

Hammond is a vocal leader on and off the field, not one to back down from calling attention to social injustices. As such, she uses her position to wield these concerns in hopes of shaping future change. 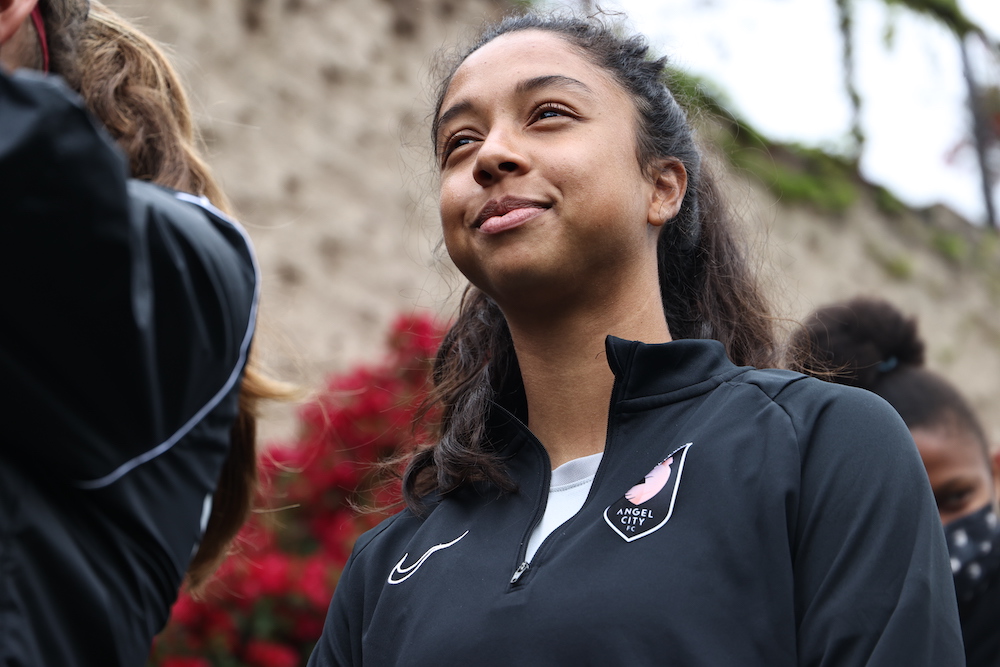 “I think that it's important as athletes with a platform to elevate causes and issues in our communities that affect larger groups,” Hammond said. “I feel a responsibility and opportunity to elevate other stories in order to create more inclusive spaces in sport.”

Focusing on issues that affect minority populations is of particular importance to Hammond. “I think that, for me, focusing on elevating communities of color and Black communities is central to promoting the next step in women's sports. I guess I approach social justice as a method of bringing everyone along on the journey.”

Irrespective of the postseason, Angel City FC’s inaugural season has been a success. Last Sunday’s game was their fourth sellout of the 11 home games this season, with 22,000 fans in attendance. This season they averaged more than 19,000 ticket sales per game, just the second team to do so in NWSL’s history.

With Hammond and Angel City FC, the team will likely continue to be at the forefront of positive change in the league and women’s sports.

“I’m really excited to be the first Native American to play in the NWSL, but I'm more excited not to be the last. The only way that happens is if you see people that look like you doing what you want to do. For me, it's a big opportunity to take the platform I've been given and run with it. And don't stop running until things actually change and there's more representation.”

The Chicago Red Stars host Angel City FC at SeatGeek Stadium on Sunday, October 2nd. You can catch the game at 5:00 pm CT on Paramount+.