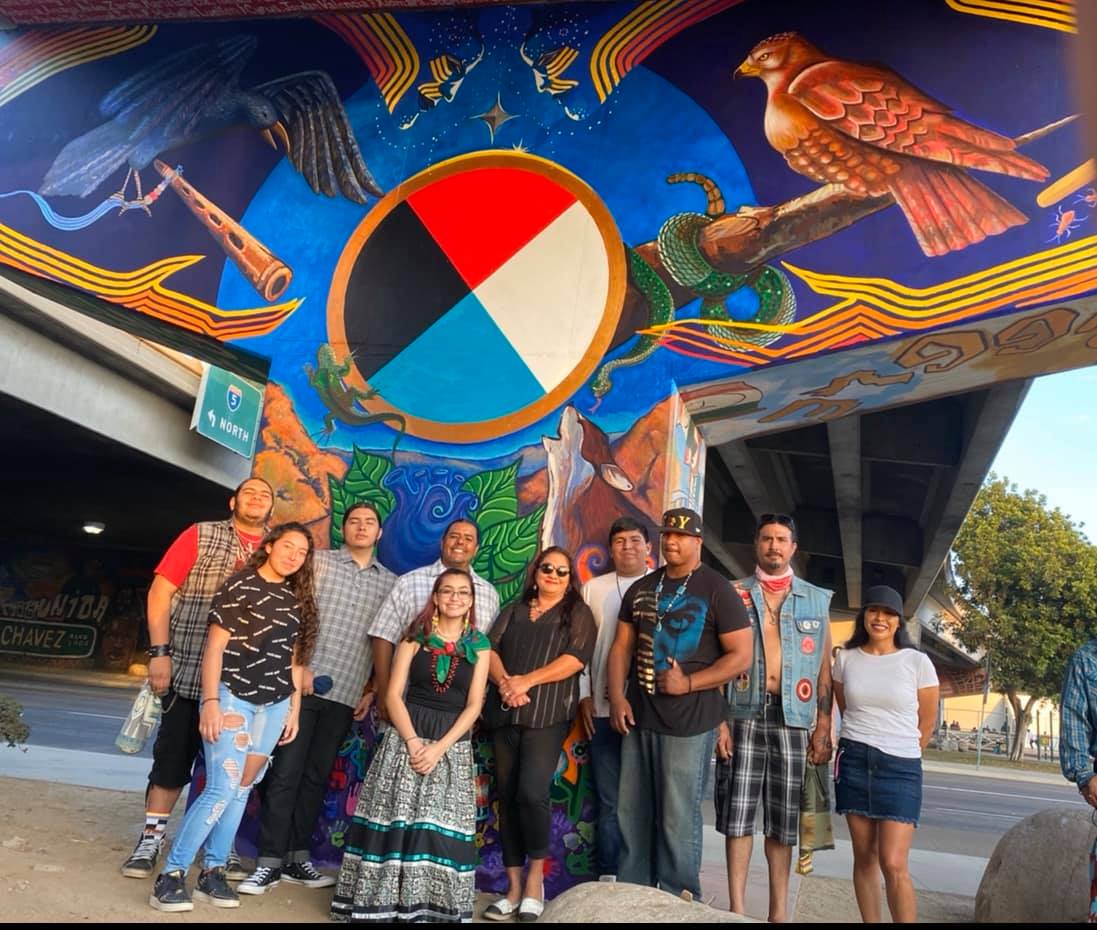 The 50-year-old landmark in the authentic and eclectic Mexican-American Barrio Logan neighborhood, is famous for multitudes of murals that combine modern street art with Mayan and Aztec symbols. Art covers nearly every concrete surface, pillar and freeway wall. 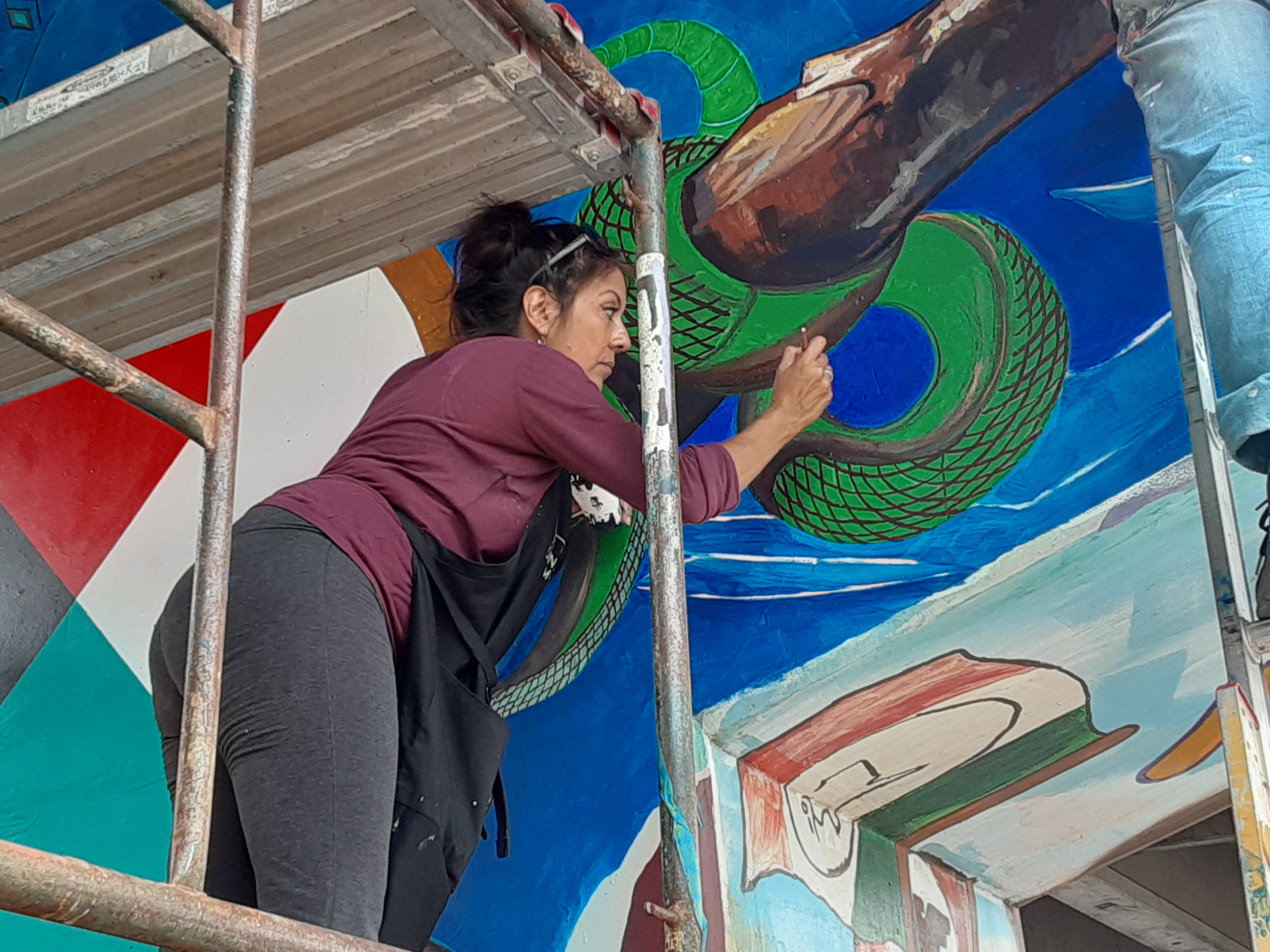 A freshly finished freeway pillar mural — crawling with color, creatures, and beating with a blue heart — has officially introduced the Kumeyaay, who have lived all over San Diego County for at least 12,000 years, into the Park’s mural mix.

At a dedication ceremony on Friday, Aug. 29, Kumeyaay community members came together to bless the mural and perform traditional songs before a crowd of artists and onlookers. Among the Kumeyaay leaders singing, shaking gourds and sharing stories, were Jamul Indian Village Councilman Jessie Pinto Sr.,  Kumeyaay Community College Instructor Stan Rodriguez (Santa Ysabel Band of The Iipay Nation), and Tribal Chairman of The Viejas Band of Kumeyaay Indians John Christman.

“When you come to this mural, it's different. It's got all these colors,” said Pinto, who witnessed every phase of the mural’s creation. “I was there just about every day. I’m just overwhelmed and excited about it. A couple of my nephews came down and sang songs. We danced around the pillar just to give it a blessing.”

Mexican-American artist Carmen Kalo led the mural project, and collaborated with her artist friends and colleagues Irene Castruita and renowned muralist Isaias Crow. Kalo has been an active participant in the adornment of Chicano Park, and she always felt it needed Kumeyaay representation.

“I wanted to incorporate something Kumeyaay, because I have been conscientious that the land that we stand on has also been Kumeyaay land,” Kalo said.  “It's important to acknowledge the Kumeyaay and their ancestral land from the ocean to the mountains, in all four directions.”

To directly incorporate today’s Kumeyaay community into the mural, the artist trio had Kumeyaay Elders and families who visited the site each day, put their handprints in paint near the bottom of the mural. They also modeled the gourd in the mural’s upper righthand corner on one belonging to Pinto’s friend Christman, who shook it in front of its artistic interpretation at the dedication ceremony.

“He was all excited,” Pinto said. “His gourd is up there on the wall now.”

Kalo’s painting partner Castruita agrees that Chicano Park is a fitting location for a tribute to Kumeyaay culture.

“The identity of this park is giving homage to your ancestors and trying to learn more about your indigenous roots, so this is another facet of that,”  Castruita said.  “There’s a lot of Mayan and Aztec art, but the Kumeyaay were the people on this exact land.” 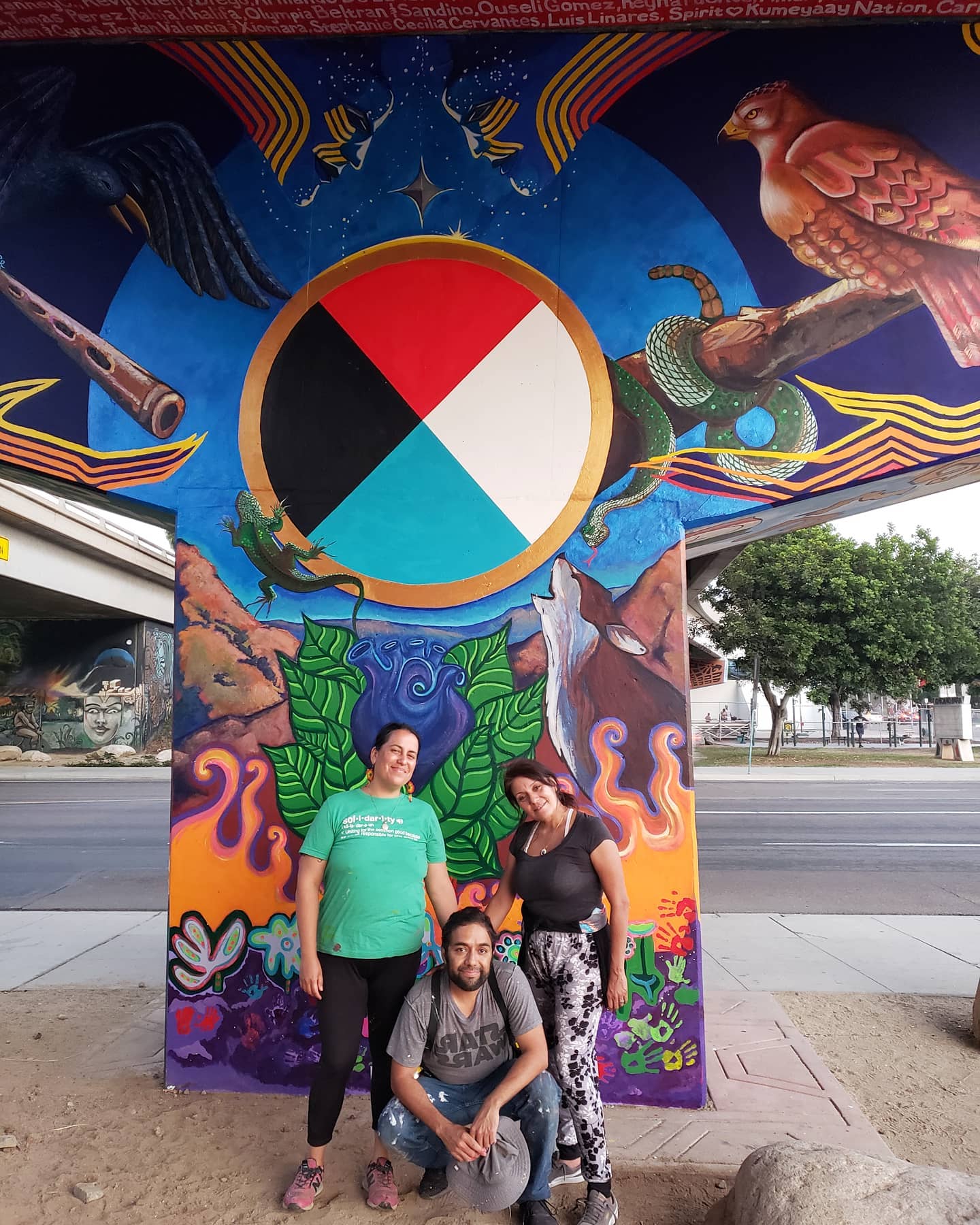 Artists Irene Castruita, Isaias Crow and Carmen Kalo pose in front of the completed Kumeyaay creation story mural in Chicano Park.Muralist Crow was invigorated by the energy of the Kumeyaay families and Elders who came to the mural site every day to pray, sing and support the artists.

“I’m spoiled,” Crow said. “I don't want to paint without that now.”

The mural may have only taken two weeks to complete, but Kalo had it in mind for 26 years. She said she kept the idea to herself for so long because she isn’t Kumeyaay and didn’t want to offend anyone.  She finally gathered the courage to propose the project and ask representatives of the Kumeyaay community, many of whom Kalo already knew, for permission.

“I got support from the Kumeyaay, and they shared their creation story, and it’s a very long story,” she said. “The vision that came to me was this design. This is a ceremony to Creator because Creator came down to live with the humans, and after living with them he ended up dying, which is a form of knowledge, because these humans were eternal and didn’t know anything about death.”

Kalo explained that the crow, coyote, lizard, red-tailed hawk and other apparent animals on the mural are considered to be humans in the story. In the ceremony depicted on the mural, those animals/humans eventually go wild with grief.

“They all wanted a piece of Creator so they started to have a struggle trying to get close to the heart,” she said. “At one point the heart goes up into the air, and when it landed back down, the spatter of blood landed on the hawk and that’s how it got its name, the red-tailed hawk.”

Kalo said the scene is just one small piece of a very layered and complicated story, and she is grateful the Kumeyaay community shared it with her.

“It  was a tremendous honor,” Kalo said. “This mural is a gesture of love.”

Pinto and his fellow Tribal members are feeling the love.

“We’re happy as heck. Kumeyaay people have been in this area so long and we’re starting to be recognized in San Diego.” Pinto said.  “The Kumeyaay people are here and have always been here, and we’ll continue to be here.”