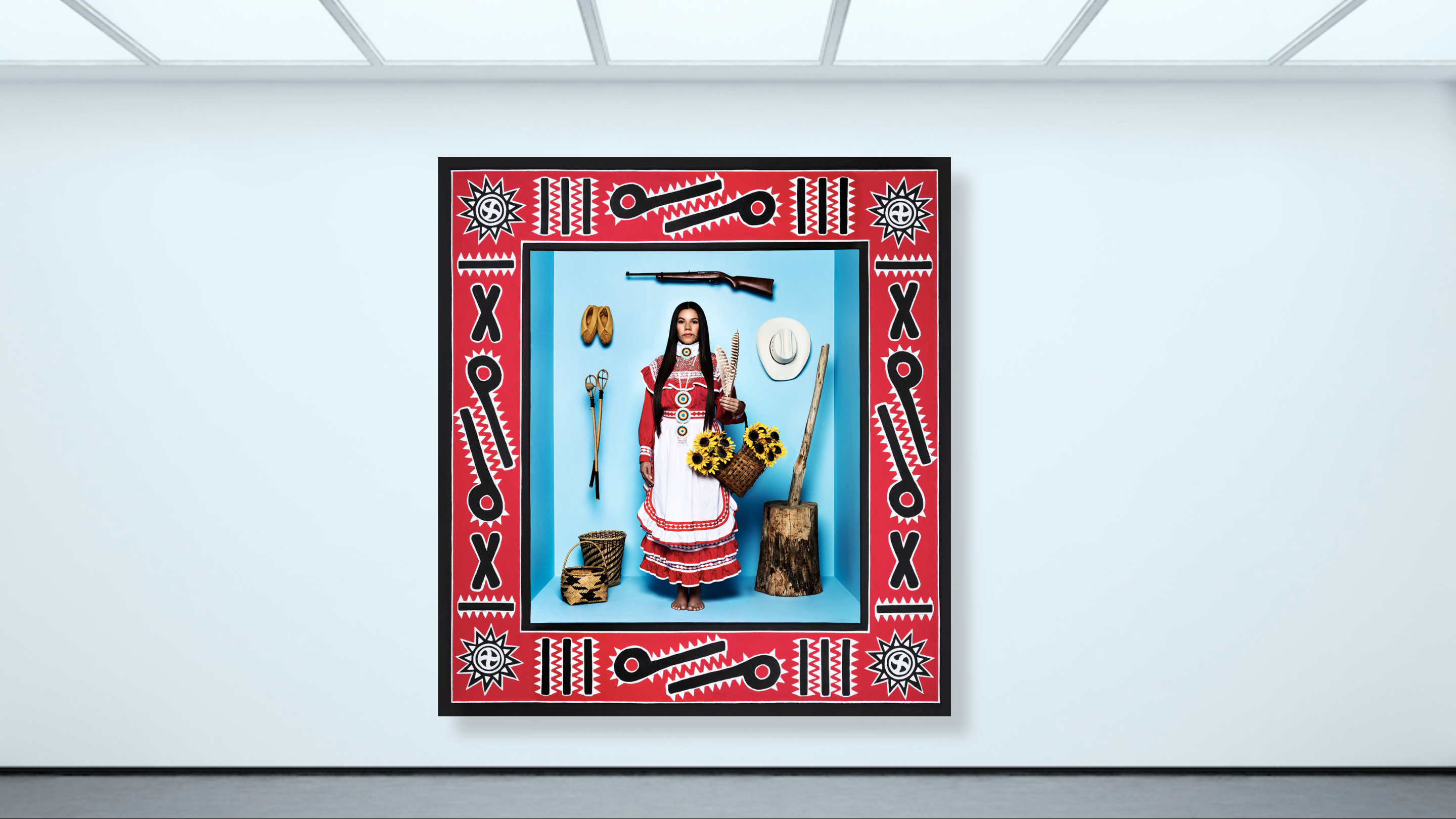 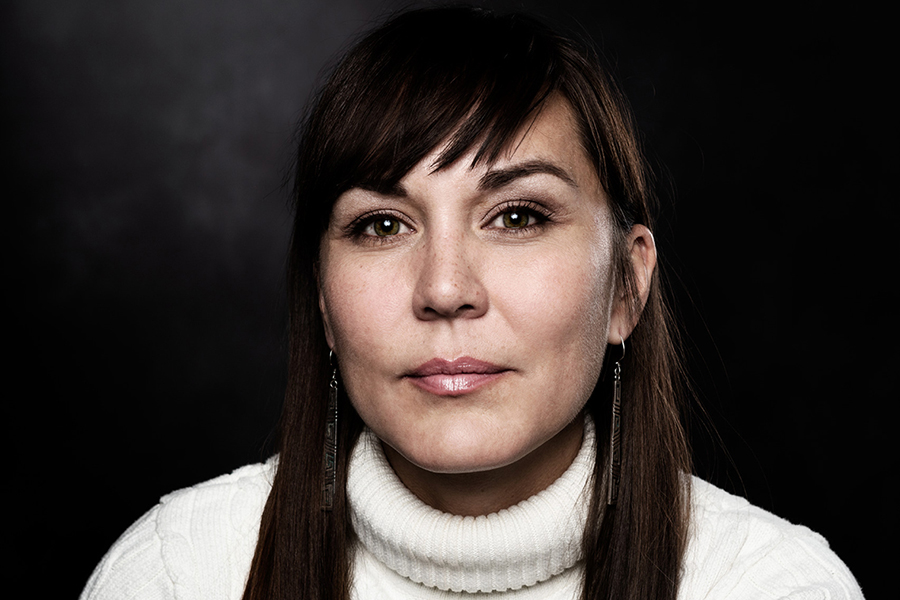 Chemehuevi photographer Cara Romero, seen here in a self-portrait, has been featured in Vogue, and is one of the hottest artists at this year's Santa Fe Indian Market.“I’m really known for my use of color. It’s supposed to scream psychologically that these are modern native women. The First American Girl series is an examination of past misrepresentation of indigenous women as dolls, and it's meant to reclaim an identity,” said Romero, who grew up on the Chemehuevi Valley Indian Reservation in Southern California, and currently lives in Santa Fe. “It was a conscious decision to make sure not everything looks historic, so that psychologically when people see them they immediately understand these are modern contemporary peoples, and living peoples. It’s not a photogravure from the 1850s.”

So far, there are four First American Girl portraits in the ongoing series Romero started in 2015, and they are placed in museums including the Museum of World Cultures in Rotterdam, Netherlands and The Autry Museum of The American West in Los Angeles. But you don’t have to be a curator to procure the pictures. Romero sells small, medium and large limited edition prints through her website, starting at $375.

Romero’s dramatic images, which balance pop culture sensibility and cultural sensitivity, have landed her in Vogue. Earlier this month, the magazine named her one of “8 Artists to Know From This Year’s Virtual Santa Fe Indian Market,” and lauded her “arresting photographs rooted in current events and issues within the Indigenous community.”

Romero is also the recipient of myriad awards and honors, including The Institute of American Indian Arts Distinguished Alumni Awards, and numerous top prizes in photography from major shows including  the Heard Museum Indian Guild Indian Fair and Market and The Santa Fe Indian Market.

Throughout her colorful and charmed career, Romero has cultivated fans in high art places.

Kim Peone, director of the Southwestern Association for Indian Arts (SWAIA), which runs the Santa Fe Indian Market, is one of them.

“What I love about Cara is she is very thoughtful about who she is as an artist, and who she is as a representation for other Native Americans, and she transfers that into her work,” Peone said. “There’s depth there. There’s a real sense of history even and really wanting to move away from our stereotypes.”

Peone and Romero focused on more of the photographer’s work during a Coffee With Kim interview for the SWAIA website.

Peone was drawn into the emotional depth of Romero’s “Water Memories” series, which the artist describes as “photography dreamscapes dealing with Native American relationships to water, the forces of man and of Mother Nature.”

In the series’ title image, two submerged Native Americans float gracefully and naturally in a fluidly lighted drowned world that seems to stand still. “Terrifying and peaceful” is how Romero explains the effect, and it’s apt.

“To me, those were very profound,” Peone said. I come from an area where our indigenous lands were affected by hydroelectric power as well, and I didn’t know that until I had the opportunity to talk to her.”

Coffee with Kim and Cara Romero from Santa Fe Indian Market on Vimeo.

The series is her intricate and inspired response to what she saw as a dearth of conscientiously crafted Indian girl dolls.

“When we had a daughter of our own is when we really noticed the paucity of diversity with American Girl dolls. They have one American Girl doll that's a Native American,” Romero said.  “Or at a truck stop, those dolls are always wildly offensive. There is never any detail in the regalia, no attention and love to the details, no acknowledgement of more than 250  tribes. They’re these kinds of failures.”

Thinking outside the doll box, the funky and philosophical photographer decided to recast those junky, generic playthings as very particular pictures of Indigenous power, vitality and value.

She formulated an ambitious plan: build a 7’ by 6’½’’ living doll box that can be taken apart, stored, and re-painted and designed to tell each subject’s story, and find fabulous modern Native women posing as culture bearers with their own everyday items and cherished accessories, to fill them.

“They kind of became these museum dioramas that express so much more than just what a (typical) Native American doll would look like,” Romero said. “They have this big sense of love about how we rig our daughters and how that is an intergenerational endeavor, and our different placement of wealth or value upon the items and the accoutrements that are in the boxes.”

The most common disappointing dolls Romero said she found over the years tended to be lazy takes on Plains Indians. “That's the quick go-to, and they don’t even get those right,” she said.  “I thought I would try to at least get one right.” 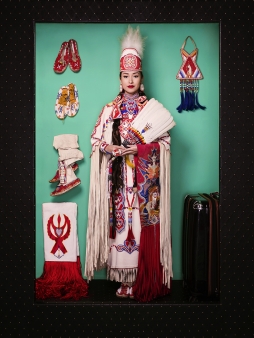 Wakeah, a Kiowa/Comanche woman, is featured  Romero's First American Girl series. To realize her vision, Romero called on her colleague and friend, the Kiowa and Comanche artist and dancer Wakeah, to pose as her first First American Girl. Dance regalia is central to the subject’s identity, and Romero photographed her in a dazzling traditional southern  buckskin ensemble that took five of her family members more than a year to create.

Like every subject in the series, Wakeah selected the treasured and essential items adorning the box. “I placed her accessories around her to show off the beauty and accurate detail of her regalia,” Romero said.

The striking model and her crimson beaded and fringed accessories against a cool turquoise background, make for a glorious and glamorous scene. “The high fashion lighting is not just meant to make her look right off the runway, but also for the viewer to fully embrace the high fashion masterpiece of her regalia,” Romero said.

The variety and value of Wakeah’s footwear is also emphasized. ”She’s not only got her moccasins on, but her backup pairs are on the wall.” Once the portrait was complete, Romero was assured her first dive into pro-detail Indigeneous doll design was a winner.

“It was so well-received, and everybody was asking, 'Will you do this with my tribe? Will you photograph my daughter?'" Romero said. “It was really the community that drove it to become a series.”

Amber Get Your Gun

Most parents would undoubtedly go ballistic if they spied even a toy firearm among an American Girl’s accessories. But most dolls aren’t like Amber Morningstar Byars. 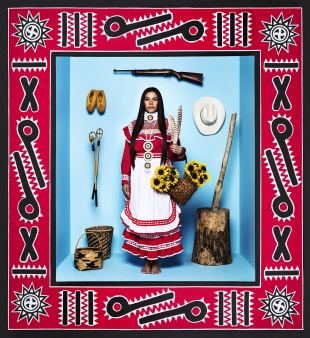 Amber Morningstar, a Choctaw woman.Romero’s Choctaw model reached for her rifle when picking and choosing the items that define her. “She wanted her favorite cowboy hat and her gun, which is very true to her upbringing,” Romero said.

Amber Morningstar, a celebrated stone sculptor and now a law student, was photographed in her ribbon dress. She is placed amidst personal accoutrements that are both functional art pieces and everyday essentials, including river-cane baskets, pucker toe moccasins, kiti/kitapi (corn grinder), and her gear for the Choctaw national sport of ishtaboli (stickball).

Romero said the most time-consuming element of this First American Girl installment was dolling up the box. “We spent days and nights creating a life size box in the style of the Choctaw Nation’s beaded sashes,” she said.

Daughter of the Pueblo

The entire First American Girl experience is an intergenerational celebration. 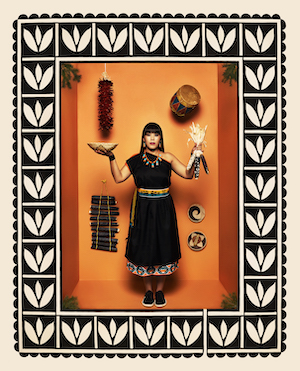 “Sometimes their mom helps, or grandmas donate items from their walls,” Romero said of the process of gathering accessories for the photos.

In the Julia portrait, “that’s grandma’s blue corn on the wall, and grandma’s baskets from her kitchen,” Romero said. Julia’s great grandfather is also a presence in the picture, and is represented by his Cochitli drum. Adding a touch of traditional native nourishment, hand-painted Cochiti wild spinach designs by Southwest contemporary artist Daniel McCoy freshly frame the scene.

From her basket hat to her bare toes, Naomi is a model modern Northern Chumash woman. “In California, we dance without our shoes on, so it's more appropriate for her to be barefoot when she’s in her dance regalia,” Romero said. 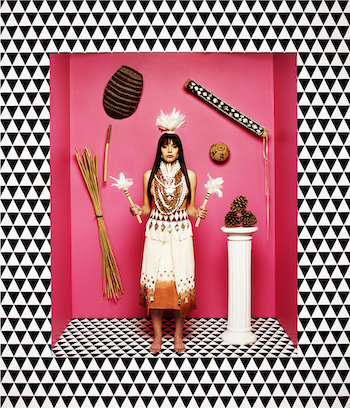 Naomi, a Northern Chumash woman. Nuance and symbolism surround Naomi, who is the daughter of a famous California regalia maker. To her right, the pinecones on a pedestal  reflect the item’s high status in Chumash culture, and the black and white triangular patterns on the doll box frame reference a pinecone scale pattern commonly found in Chumash beadwork.

Romero painted the shocking pink background with the Golden State in mind.

“That black-and-white pattern and the hot pink makes it modern California,” Romero said. Naomi’s dress, which is adorned with abalone, and her necklaces of pine nuts, olivella snails, abalone, and clamshells, are a wearable tribute to the regional natural materials used by her Tribe since time immemorial.

“If you were to look at the entire series you would see how regalia differs from bioregion, to bioregion, using the cultural precious items from their local areas to create an adornment for dance and ceremony,” Romero said. “Naomi is also a celebration of traditions that have been passed through the centuries and millennia.”