ArtSEA: The Story of the Samish Maiden at Deception Pass 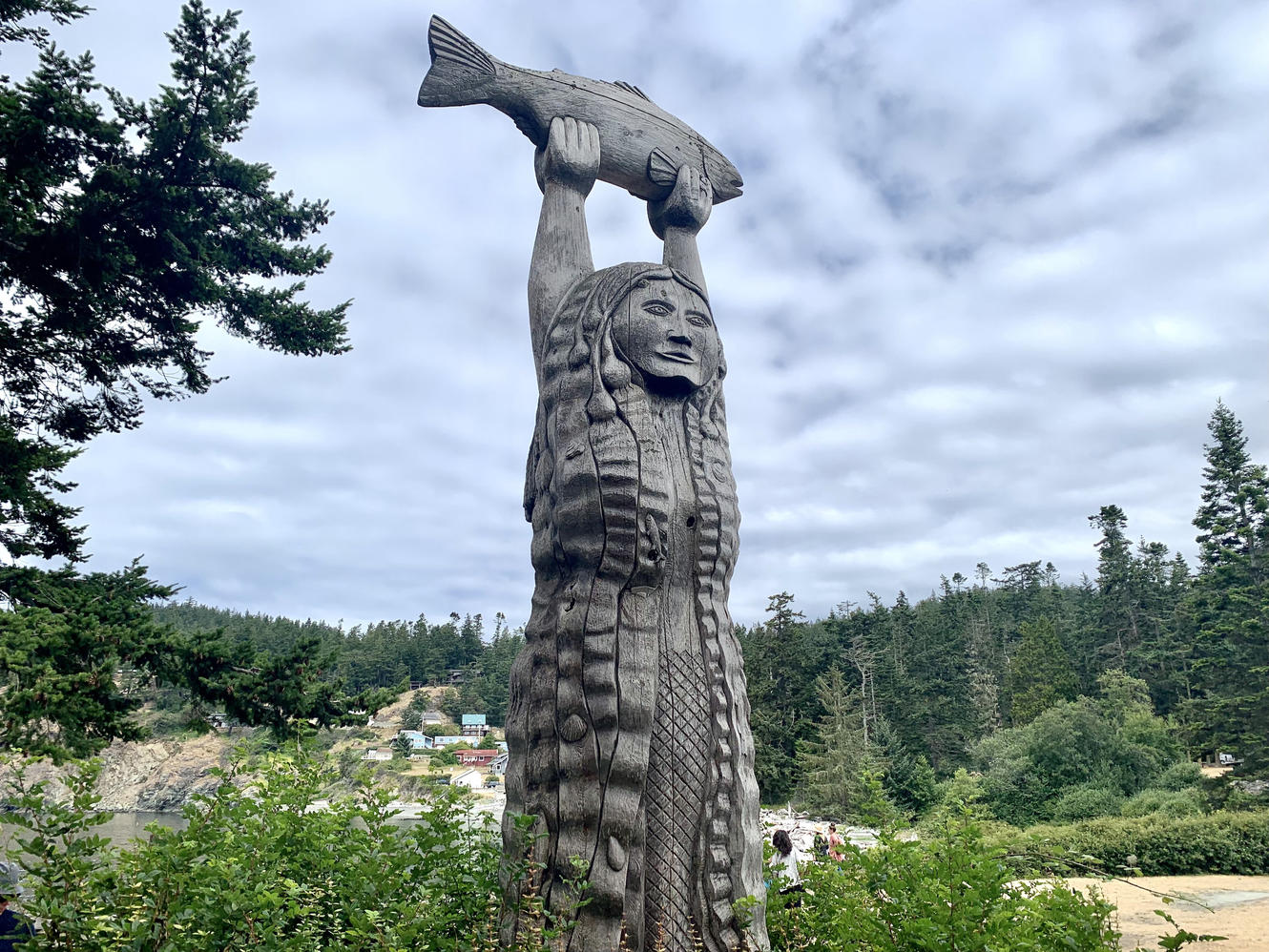 Most of my art viewing is on purpose. I hear about something new or intriguing and seek it out. So it’s a joy for me to discover art where I’m not expecting it — art I know nothing about in advance. That happened last weekend when I took a road trip to Deception Pass State Park, which spans Fidalgo and Whidbey islands.

I’ve driven across Deception Pass Bridge before and marveled at its striking cantilevered steel design. But I had never wandered the trails below it, which on the Fidalgo side wend between Rosario Beach, Bowman Bay and Lottie Point. I soon discovered the natural landscape there is nothing short of spectacular. And guess what else this beautiful place holds? A stunning sculpture.

Walk toward the Rosario Head trail and you can’t miss the “Maiden of Deception Pass.” This 24-foot-tall, 5-foot-wide cedar log carving is an homage to the Samish legend of Ko-kwal-alwoot, a young woman who chose to live undersea to ensure that her village would never go hungry. (Hear the full story from Samish Indian Nation manager Leslie Eastwood.)

Anacortes sculptor Tracy Powell carved the story pole from a red cedar tree donated by the U.S. Forest Service, working under the careful guidance of Samish elders. (Powell is not Native; the elders agreed to his involvement because at that point no tribal members had the necessary carving skills.) It took him a year. Powell has said the process revolutionized his artmaking approach, and he was happy to be paid in sweaters hand-knit by women of the Samish Tribe.

The pole was erected in 1983 at Rosario Beach, known to have been the site of a large Samish settlement. Ko-kwal-alwoot stands there, powerful and alluring — her cedar tone gone silver, her promise of a bountiful catch visible in the fish she holds over her head, her reminder to balance human culture with wild nature still resonant.

If you visit Ko-kwal-alwoot, consider timing your trip with one of Washington State Parks’ newly reinstated outdoor concerts on the Whidbey side of Deception Pass State Park.

The reemergence of outdoor music is pretty thrilling after last year’s eerily quiet COVID season. (My neighbor’s grandson’s spontaneous bagpipe yard performance was an exception and a highlight — something I will never forget from that sad and scary spring.)

Amping up the excitement is the recent announcement that 1990s alt-hip-hop sensation Digable Planets will play a free sunset show at Westlake Center (July 25, 8 p.m.). It’s been almost 30 years since the band released its iconic, Grammy-winning, jazz-inflected hit “Rebirth of Slick (Cool Like Dat).” But many of us need only hear the upward climb of those three trumpet notes — sampled from Art Blakey and the Jazz Messengers — to start singing the refrain, as I’ve been doing for days.

The influential group will appear with its original lineup: Mary Ann “Ladybug Mecca” Vieira, Craig “Doodlebug” Irving and Seattle-based Ishmael “Butterfly” Butler — the last of whom is the Garfield High School grad who has also earned accolades for Shabazz Palaces, his locally based Afrofuturist hip-hop duo with Tendai Maraire. Heads up: Shabazz Palaces will play Woodland Park ZooTunes on Aug. 22.

Yes, the insanely popular ZooTunes outdoor concert series is back, too, for its 37th edition, this year curated by KEXP. And rather than the big national acts that usually play the meadow stage, the new focus is on local bands — so many of which were hit hard by pandemic venue closures. This weekend brings the Delvon Lamarr Organ Trio (July 25, 6 p.m.), which always delivers a feel-good groove.

Meanwhile, the city continues its quest to get people downtown again, with the second installment of the “Welcome Back Weeks” series, this time in Pioneer Square’s Occidental Square and featuring performances by beloved Seattle musicians Shaina Shepherd, Shenandoah Davis and The Black Tones (July 24, 10:30 a.m.–3 p.m.).

I was in Pioneer Square earlier this week, when I once again stumbled upon unexpected art — outdoor music at the nifty new Occidental Square Pavilion, designed by Northwest starchitect firm Olson Kundig. The local Lamar Lofton Trio was playing Latin-flavored jazz as part of a Makers’ Market organized by Peace Peloton (dedicated to showcasing and supporting Black-owned creative businesses).

The Wednesday early-evening scene was small but eager, which seemed appropriate during this time of pandemic aftershock. Many restaurants in Pioneer Square have closed permanently; one had a sign saying it can reopen only when it’s able to fill all the vacant kitchen positions. Still: it was so nice to chance upon live music again. (Read our story on how Seattle’s indoor jazz scene is making a comeback, too.)

I was in the neighborhood to check out a cool new window installation at the Pilchuck Glass Exhibition Space. Stimulated Sight is a collaboration of the five women awarded the legendary glass school’s Hauberg Fellowship last year. Artists KT Hancock, Julia Chamberlain, Bri Chesler, Sarah Terry and Minhi England created a rippling vision with glass, neon, metal and vinyl. Peering through several “portholes” in the piece reveals an interplay of shadow, light and refraction that emphasizes the liquid quality of glass.

Pilchuck is celebrating 50 years of glass innovation and international acclaim this year. (And, sadly, as I noted a couple weeks ago, lost one of its original innovators in late June.) While the Stanwood-based school isn’t currently open to visitors, you can see its influence well beyond the Pioneer Square gallery, most obviously at Chihuly Garden and Glass, and also at Bellevue Arts Museum, where the new exhibit Trace (July 23-Jan. 2, 2022) features more than 40 collaborative works by eastern Washington-based artist Terri Grant and U.K. artist Purnima Patel (also former Hauberg Fellows). The two explore the concept of “traces” — from stains to echoes to stardust — in a rich variety of etched, cut and layered glass.

A bit further afield, you’ll find Pilchuck’s “official” anniversary show, Celebrating 50 Years, at Matzke Fine Art and Design on Camano Island (through Aug. 22). It’s an incredibly diverse representation of glass — blown, hand-sculpted, kiln-formed, cast, engraved, flocked and lit with neon gas — revealing a medium pushed to its outer limits. Bonus: The 10 acres outside the gallery house a sculpture park exhibiting 150 pieces, including several stone works by Tracy Powell, who carved the Ko-kwal-alwoot pole. Yet another chance to wander through the woods and encounter art among the trees.