Actress Sacheen Littlefeather, Who Represented Marlon Brando's Rejection of the Oscar, Has Walked On 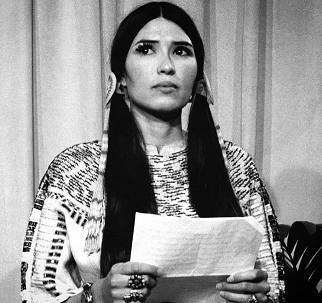 Sacheen Littlefeather (Apache), who will be remembered for her speech of defiance at the Academy Awards in 1973 when she rejected the Oscar on behalf of Marlon Brando, has walked on. Her passing was announced on social media Sunday night. According to a statement posted by her caretaker, she was surrounded by loved ones in Novato, Calif. She was 75.

Her passing comes two weeks after she was honored almost a half century later by the Academy of Motion Picture Arts and Science honored her in a ceremony. In June, the organization that awards Oscars, sent her a letter of apology for her mistreatment at the 1973 Academy Awards ceremony.

The Academy Awards happened during the 1973 occupation of Wounded Knee by the American Indian Movement (AIM). Marlon Brando, who was heavily favored to win the Best Actor Award for his portrayal of Mafia patriarch Don Vito Corleone in The Godfather. In an act of defiance, Brando decided he would not accept the Oscar, but instead asked Littlefeather to represent him at the Academy Awards so that she could make a statement about the takeover of the Wounded Knee that occurred on February 27, 1973.

In a short speech that lasted about a minute, Littlefeather said:

“Hello, my name is Sacheen Littlefeather. I’m Apache, and I am president of the national Native American Affirmative Image Committee. I’m representing Marlon Brando this evening, and he has asked me to tell you in a very long speech which I cannot share with you presently because of time but I will be glad to share with the press afterwards that he very regretfully cannot accept this very generous award. And the reasons for this being are the treatment of American Indians today by the film industry (rumbling in audience) ... excuse me (boos exceeded by applause) ... and on television, in movie reruns, and also with recent happenings at Wounded Knee. I beg at this time that I have not intruded upon this evening and that we will in the future, our hearts and our understandings will meet with love and generosity. Thank you on behalf of Marlon Brando.”

She was met with some applause and also many boos. While it is thought the boos were meant for Brando, who was not present, Littlefeather faced the boos and walked off the stage.

According to the Academy, the 26-year-old Ms. Littlefeather was the first Native American woman to appear onstage at the Oscars. Littlefeather had known Marlon Brando for about a year before she stepped onto the stage of the Dorothy Chandler Pavilion on his behalf.