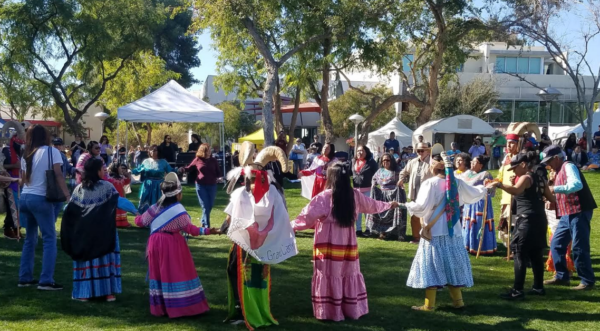 SCOTTSDALE, Ariz. – The annual Arizona Indian Festival (AIF) during Western Week in the City of Scottsdale from February 1 - 9 included a fun-filled family event with no admission, located at the Scottsdale Civic Plaza, visitors had a chance to see representation from all twenty-two tribes of Arizona.

On Saturday, February 8, Old Town Scottsdale hosted the Western village, Hispanic village, Arizona Indian Festival and the Parada Del Sol Trail’s End Festival with that day being the busiest, with foot traffic up to 10,000. On the second day of the AIF, February 9, was less congested, but the event schedule was still packed with a variety as it rotated traditional songs and dances every twenty minutes on the main stage. 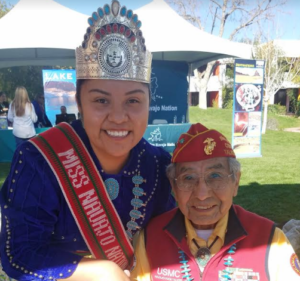 This year, the 66th Annual Scottsdale Parada Del Sol Parade was led by Grand Marshal Peter MacDonald Sr, Navajo Code Talker from Teec Nos Pos, Az. MacDonald, the former chairman of the Navajo Nation also spent time within the Navajo village during the Arizona Indian Festival to sign autographs and talk with visitors who stood in line to see him.

The Arizona Indian Festival is coordinated by Arizona American Indian Tourism Association (AAITA), a 501(c)3 non-profit organization, along with a festival committee.  It takes six months of planning to gather all Arizona tribal communities and businesses together.

AIF has been at the Scottsdale Civic Plaza since 2015, the venue has been a great location with plenty of outdoor space to involve traditional dwellings, a dance performance area, food vendors, Native arts & crafts and hospitality area.  Adjacent to all the festivities for Western Week in Old Town Scottsdale, the mayor of Scottsdale, W.J. “Jim” Lane also made it appoint to attend the Arizona Indian Festival to express his appreciation to all those involved. 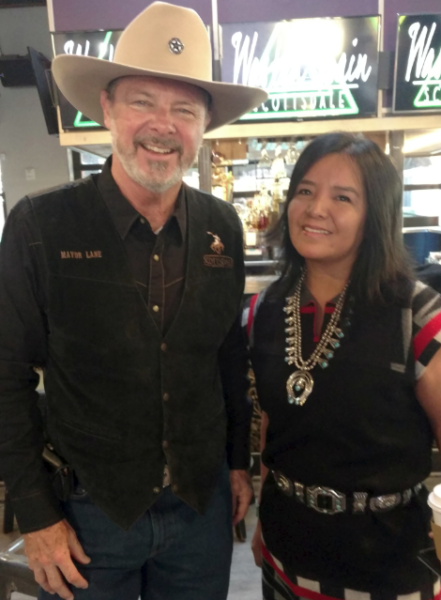 A new element to the festival is the Arizona Native Edible Experience. On Saturday night, February 8th, the Scottsdale Museum of the West hosted approximately 280 people to be part of the chefs competition in preparing an edible experience to be remembered using native plants and local game .

“In their sponsorship they included having the museum exhibits opened for guests and support in marketing the event to their membership and community. Through their support, we were able to engage new audiences sharing the rich cultural experiences of Indigenous Arizona,” explained Jeffrey Lazos Ferns, coordinator for AZ Native Edible Experience.

“In addition we engaged the San Carlos High School Culinary & Hospitality class. The Arizona Indian Festival was pleased to have these students assist the chefs. Their program involves assisting in community cultural events while they learn to work with tribal elders of their communities to enhance their culinary education,” explained Ferns.

Arizona Indian Festival continues to grow each year with the help of sponsors, volunteers and all the Arizona tribal entities. Each year, visitors walk away enlightened, creating new friendships and learning more about their neighbor. “Over 16,000 visitors this weekend, the venue is great room for expansion and the heart of tourism in Scottsdale, in conjunction with Western Week,” expressed Steve Geiogamah, City of Scottsdale Tourism Development Manager.

AAITA board members are all volunteers and are heavily involved in their communities to help promote and market travel and tourism destinations year round. “I am very fortunate to have a good team who are so passionate about marketing Arizona native communities, to help increase business on our reservations is key to economic development. I have been a board member since 2008 and now the newly elected president of AAITA. I also want to thank all the tribal royalty who shared their talent and Ira H. Hayes American Legion Post 84 for their assistance,” stated Geri Hongeva-Camarillo (Navajo).

For more information about the festival or to learn more about Arizona American Indian Tourism Association, visit: www.ArizonaIndianTourism.org.

Tribes Highlighted Along the Lewis and Clark National Historic Trail

Donate
Free Newsletter
About The Author
Author: Geri Hongeva CamarilloEmail: This email address is being protected from spambots. You need JavaScript enabled to view it.
Breaking News