The Columbus Conundrum: Why Protecting Statues Protects America’s Genocidal Past 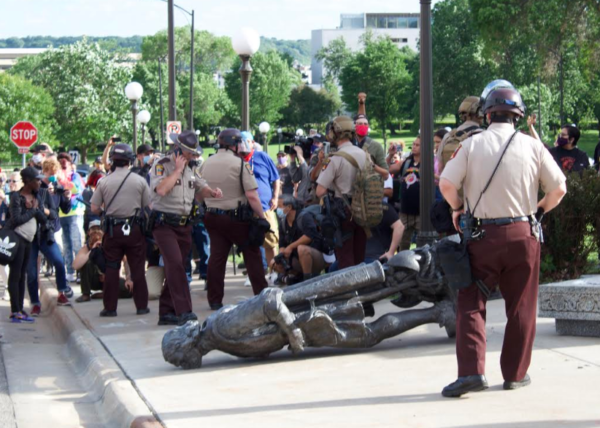 GUEST OPINION - SAINT PAUL, Minn. — The toppling of the bronze Christopher Columbus statue on the Minnesota State Capitol Grounds in Saint Paul last month amplified the conversation on race and ethnicity as the nation and many other countries challenged racism, oppression, and those who protect it.

The people pulling down monuments and statues around the world say that many narratives — such as the story of Christopher Columbus — do not consider the people who have been displaced, depopulated, or exterminated as a result of the colonization of the Western Hemisphere.

What is missing in the discussion, however, is recognizing those who toppled the statues. 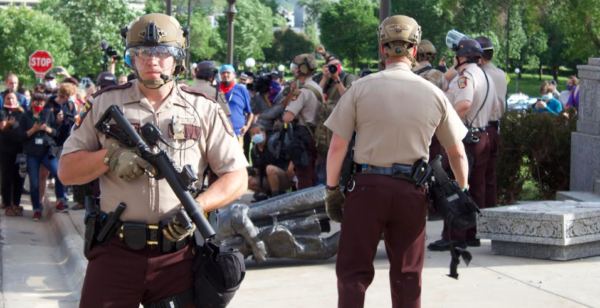 Minnesota State Police were on hand with automatic weapons, but did not stop the toppling of Christopher Columbus statue.

In Saint Paul, about 40 people, mostly women, fastened a rope around the neck of the Columbus statue, rocked it back and forth, and took it to the ground. It took less than a minute.

There were pastors, chaplains, singers, dancers, photographers, police officers, community leaders, grandparents, parents, and children, but it was the women who were fired up to pull the statue down. Although mainly Indigenous women pulled the statue down, women of all races of the human family participated. They knew the consequences as Mike Forcia, Bad River Band of Lake Superior Chippewa (Wisconsin), shared with the crowd that the Minnesota State Patrol warned the gathering of criminal charges of destruction of public property. That didn’t deter the crowd.

They were all unarmed.

When the statue came crashing down with a hollow metallic thud as it met the pavement, the crowd rejoiced in celebration with cheers, applause, and a round dance, where everyone holds hands and dances to the voices and beats of Indigenous men in a circle.

Yet they are called perpetrators, criminals, and even the “American Taliban” by Republican Texas Senator Ted Cruz. 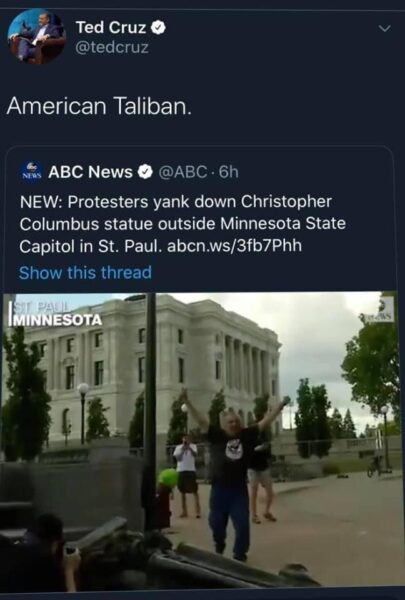 How could Indigenous women be compared to an oppressive religious fundamentalist organization that inflicts violence and war on Afghans, particularly Afghan women?

There is no comparison between the two groups of people and any attempt to compare them demonstrates that someone hasn’t done their homework. Speaking to the masses who don’t understand, or care to understand, the issues and trauma that Indigenous peoples have faced since the arrival of Europeans perpetuates a harmful past.

In other words, protecting statues is protecting a racist, genocidal past.

Senator Cruz uses a platform that is privileged, as he should on occasions such as this, but he is wrong in his comparison and as such fails to acknowledge systematic oppression. Cherishing a racist, murderous, perverted man that immediately enslaved the Indigenous people he met, including children, and continued his dehumanization by being the world’s first trans-Atlantic slave trader is the embodiment of oppression.

From the onslaught of violence, diseases, and land theft by way of the Doctrine of Discovery, the westward expansion of Europeans into the Western Hemisphere is nothing short of genocide.

Genocide began at the arrival of Christopher Columbus and continues to this day. While there are far too many statistics to support this claim, here is an obvious one: Henry F. Dobyns estimates that before Europeans colonization of the Western Hemisphere there were between 90 and 112 million people in the Americas, which is more than Europe at the time. In many estimates, up to 95 percent of Indigenous peoples are believed to have been killed off by diseases imported by Europeans.

Today, the US Census Bureau counts Indigenous peoples at 0.9 percent of the total United States population, or as NBC News claims, “the census’ most undercounted racial group.”

Continuing and perpetuating oppression by calling those who toppled the statue criminals while at the same denying the subsequent genocide commenced by Columbus is also denying historical trauma. Historical trauma plagues indigenous peoples. It undermines that, today, 30 percent of American Indian children are still adopted or fostered out of their homes and communities, even after the Indian Child Welfare Act of 1978. We’re still being occupied while being colonized.

Oppression is well detailed by Paulo Friere’s famous book Pedagogy of the Oppressed. Friere identifies four pillars of oppression as: internal, lateral, intra-oppressed group, and external. Only one pillar of oppression comes from the outside—external.

When a group of people is oppressed, the oppression itself manifests inside those who are oppressed. To recite an obvious example, the “Pilgrims” sailed across the ocean and claimed to have escaped religious oppression. They didn’t escape oppression, however—they brought it with them. They oppressed each other and perpetuated oppression to blacks and Indigenous peoples.

According to Friere, oppressors are purely materialistic. Humans are objects and by such a paradigm, individuals are able to be owned. As a result, oppressors also dehumanize themselves.

Freire states that once the oppressed understand their own oppression and discover their oppressors, the next step is dialogue, or discussion with others to reach the goal of humanization. In order to help the oppressed, one must become oppressed, in some way. Only the oppressed can allow humanity to become fully human.

Until the oppressor acknowledges oppression and participation in it, systems of oppression will continue.

As to the systematic change and the official processes politicians cite for removing statues, changing public art and dedicating holidays, there is a trend that began in 1990 where South Dakota, in a Year of Reconciliation with the tribes, changed Columbus Day to Native Americans’ Day. That trend of re-dedicating the second Monday in October to similarly named Indigenous Peoples Day has swelled to more than 50 municipalities and 10 States.

Notably, H.R. Res. 627 was introduced to the 116th Congress on Oct 11, 2019 by Mrs. Torres of California (for herself, Ms. Haaland, Mr. Young, Ms. Davids of Kansas, and Ms. McCollum) to the Committee on Natural Resources. It aims to designate the second Monday in October as “Indigenous Peoples’ Day” to celebrate and honor indigenous peoples and their shared history and culture.

You can read about it here: https://www.govtrack.us/congress/bills/116/hres627

Participating in a democracy isn’t just about representing your own interests and those in the majority all-too-often fail to consider the viewpoints of those who are affected by the systems of oppression.

Changing the designation from Columbus Day to Indigenous Peoples Day doesn’t erase history, it corrects it and welcomes those who previously didn’t have a voice to contribute to a narrative that includes them.

“Only the oppressed can free the oppressor,” Paulo Freire once said and now it is ever more clear as white supremacy is seeing its sun fade far into the horizon.

Darren Thompson is a photographer, writer and musician from the Lac du Flambeau Band of Ojibwe. He writes for Native News Online, powwows.com, Native Max Magazine, and Indian Country Today. He has performed at the Crazy Horse Memorial, the Smithsonian’s National Museum of the American Indian, the Heard Museum, and the National Music Museum. Combined, he uses storytelling to teach about America’s first peoples and the cultural genocide they have endured.