[This story was originally published on February 15, 2021. It has been updated to reflect the passing of another year.]

The sounds of night kept me awake on the hard floor in a large community center outside of San Diego at the San Pasqual Band of Mission Indians. It was 11 years ago. Snoring and coughing mixed with the whispers of those who could not sleep merged together like an orchestra that lulled us to sleep. Dozens of us were tucked into sleeping bags scattered throughout.

It was the first night of a walk across America called the “Longest Walk 3 - Reversing Diabetes.”  The event was organized by American Indian Movement (AIM) co-founder Dennis Banks, who had been recently diagnosed with diabetes, a disease that claims the lives of Native Americans at a rate of two-and-half times greater than their White counterparts. The walk started on the west coast and ended in Washington, D.C.

After his diagnosis, Banks — aware that diabetes could be reversed through diet and exercise — called on dozens of Indian reservations and tribal communities to spread the word and join the walk one tribal community at a time.

A few weeks prior, I called Banks at his home on Leech Lake in Minnesota, explaining that I was launching an Indian Country news website. I asked if I could tag along for the walk.

“Of course, you can. You will get to meet a lot of people along the way,” Banks said, sharing details of where to meet in February.

That night was the beginning of Native News Online. 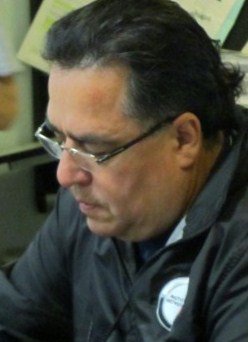 Founder, Editor & Publisher Levi Rickert on Pine Ridge Indian Reservation during Longest Walk 3.I joined the event on the Barona Indian Reservation in modern-day Southern California. Walkers there boarded a coach bus to La Jolla Shores park, where the walk began with a ceremony. Walkers lined up carrying eagle staffs, tribal nation flags, and AIM flags. We took off under a brilliant southern California sun with hand drums invoking our ancestors.

By noon, we reached Torrey Pines State Beach on the Pacific Ocean, forming a circle on the beach to hear Banks address walkers about the disease that kills more American Indians than any other. The cause of the disease: food distributed to Indian reservations, filled with preservatives and void of nutrients. It was a speech I would hear Banks give many times along the route as we stopped along scores of Indian reservations.

“For the rest of my life, before I enter the spirit world, I will devote my energy to doing away with diabetes. I may take on other causes, but I will never have a bigger one than this,” Banks said.

After his speech, hundreds of walkers and well-wishers gathered for lunch provided by the Sycuan Band of the Kumeyaay. Walking through the crowd, I observed a tall Native man wearing a black top hat step out of a cab lugging a duffle bag. The image reminded me of the two-culture existence of American Indians. Later I learned he was Larry Bringing Good (Otoe Missouria/Cheyenne Arapaho), who had flown in from Hawaii to join the Longest Walk. He remained with the walk until it reached Washington, D.C. in July, serving as a lieuant to Banks and helping with logistics along the route. Bringing Good taught me wearing two pairs of socks would help avoid the blisters I got after two days of walking.

In the afternoon, we walked several more miles before vans provided to us by a tribe at the San Pasqual Indian Reservation took us to a community center, where tribal citizens treated us to a roasted chicken dinner before we settled for the night.

As I lay on a floor at a remote Indian reservation, tired but unable to fall asleep due to the hardness of the floor and the excitement of being among the long walkers who had come from several different tribes and states. My internal clock was still three hours ahead, on Michigan time. At some point, sleep overtook me.

I got up about 4 a.m. and sat in a chair in a vestibule. I was not there long before Paul Owns the Sabre, a Lakota man in his early 70s who lived in San Francisco, joined me. He told me he was on the original Longest Walk back in 1978 and was one of a handful who made it all the way across the country from San Francisco to Washington, D.C. He recounted the harsh winter blizzard of the first Longest Walk as the group crossed mountains in Nevada. Owns the Sabre had designed the walk’s logo back then, and it was updated for each Longest Walk conducted by Banks.

The Longest Walk 3 – Reversing Diabetes consisted of two routes: a northern one that originated in Portland, Oregon and the southern route I had joined, originating in San Diego. The two routes would merge near Leesburg, Virginia in early July. I did not participate in the entire walk, but spent time with the southern route long walkers in California and Arizona. I flew home to Michigan and rejoined the northern route a month later as it made its way through South Dakota and returned in late May as it traversed Chicago.

One amazing aspect of the walk is no one ever knew where they would sleep on any given night.

One Sunday evening, walkers reached San Carlos Apache in Arizona without accommodations. A tribal citizen began making phone calls. If she was unable to find accommodations, she said she would offer her yard as a place to pitch tents.

“That’s what Indians do,” she said. “We open up our homes for each other.”

Minutes later she received a call. The tribe allowed the long walkers to stay at its casino hotel and eat from the buffet.

Two memories from the Longest Walk remain in my memory. They both happened within a 24-hour period in the Navajo Nation. The long walkers set out from sleeping on a floor of a church without Banks. He stayed behind to take care of some business. Just after lunch, along the side of the road, we discovered the nature of his business. He caught up with the long walk in a U-Haul truck he had rented to transport supplies needed for the walk.

The second memory came later that night. I witnessed him put a log into a wood burning stove to keep us warm in a small cabin on the Navajo Nation. Watching him perform these tasks showed how great this iconic man was. Banks, who led the takeover of Wounded Knee in 1973, was burning wood to keep us warm.

I rejoined the walk before it reached Washington, D.C. on the Fourth of July. Days later, Banks gave his stump speech in front of the White House and a Native woman performed a water ceremony.

The Longest Walk taught me I just need a laptop with a charged battery and a wi-fi connection to publish stories to the internet. Given the lack of broadband on most Indian reservations, those simple needs are not always readily available.

During the past decade, Native News Online has published more than thousand articles. Standing Rock’s resistance to the Dakota Access pipeline was the biggest Indian Country story since Wounded Knee in 1973 until the Covid-19 pandemic unleashed its deadly wrath last year. It will take journalists years to unpack the long term implications of Covid-19 for tribal citizens.

Dennis Banks passed away in October 2017. His memory remains in my heart, and I will forever appreciate the time I spent with him along the Longest Walk because I saw up close a warrior who cared about Native people.

Covering the Longest Walk presented me with the unique opportunities to see Indian Country in a different light than I knew before. Being a journalist has allowed me to learn new things about Indian Country every day.

In the beginning, I felt it was important for Native people to tell our own stories because we have not always been happy with how they have been told in American history, American literature or how we have been depicted in Hollywood movies and in the mainstream media. Native News Online has provided a forum for Native voices.

For this 11th anniversary, I want to say to our Native News Online readers that I appreciate your continued support as we endeavor to publish Indian Country news the way you want to read it.