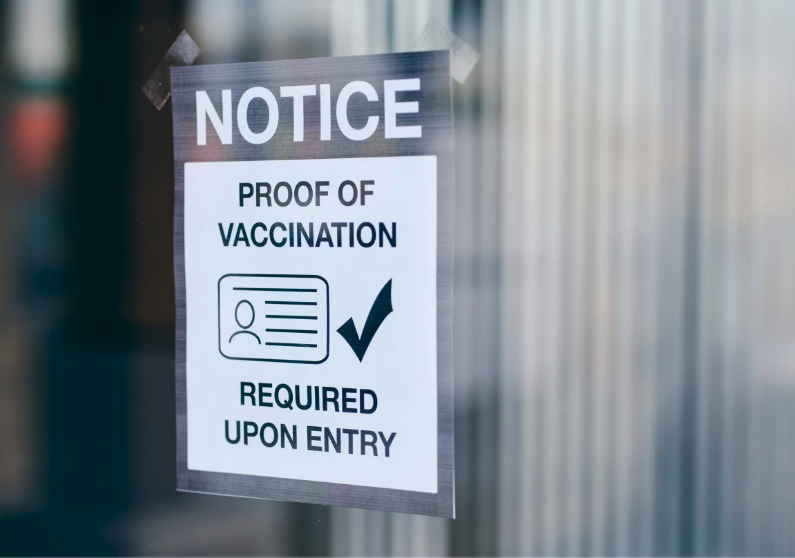 J.R. Myers’ frustration grew as he read the email: To attend a local economic development council meeting in Browning — the largest community on the Blackfeet Indian Reservation in northwestern Montana — he had to bring proof he was vaccinated against covid-19.

It was November 2021. Six months earlier, Montana Gov. Greg Gianforte, a Republican, had signed a law prohibiting businesses and governments from discriminating against people who aren’t vaccinated against covid or other diseases. To Myers, the requirement to attend the meeting of the Glacier County Regional Port Authority — formed by local governments in Glacier County’s tribal and nontribal areas — appeared to violate that law.

Myers, who isn’t a tribal member, lives in Cut Bank, just east of the reservation. He said he didn’t attend the meeting at Blackfeet Community College in Browning because he didn’t want to reveal his vaccination status — adding that the Montana law protects him from doing so. Instead, he lodged a complaint with the state.

“When this local government agency started to embrace this concept of vaccination passports, I immediately reacted because I didn’t want them to be setting a precedent. I wanted them to follow the laws of Montana,” he said.

Myers’ complaint exposed a new conflict: whether the state can enforce the law on the Blackfeet reservation over the tribe’s right to administer its own rules to protect the health of its people as a sovereign nation within the borders of the United States.

State officials began reviewing Myers’ complaint to determine whether the port authority’s decision to check attendees’ vaccination status violated state law, according to court documents. In response, the port authority filed a federal lawsuit, saying the state did not have jurisdiction to enforce the law on tribal land. Its attorneys cited a Blackfeet tribal ordinance that they said established vaccine rules on the reservation.

This month, the Blackfeet tribe joined the lawsuit as a plaintiff, saying it should be allowed to defend itself against “an unlawful attempt” to enforce state law within the reservation’s boundaries and to protect its rights to self-governance that were agreed upon in an 1855 treaty with the U.S., according to court documents. The tribe asked the court to block the state from acting on Myers’ complaint and from any other attempt to enforce the law on the reservation, according to court documents filed Nov. 15.

Law professors and attorneys said this appears to be the first time that pandemic-related laws have been challenged in court over an alleged infringement on tribal sovereignty.

“This case is really about the state of Montana attempting to assert its jurisdiction within the Blackfeet Nation’s territory,” said Mark Carter, a staff attorney with the Native American Rights Fund, a nonprofit that represents the tribe. “What happens on the reservation directly affects the health and safety of Blackfeet citizens and all those within the reservation.”

Other states pushed back against pandemic restrictions: At least 25 states beyond Montana permanently whittled down public health powers in 2021.

Montana’s vaccine mandate ban is the subject of a separate lawsuit, led by the Montana Medical Association, in which the plaintiffs argue that the law is unconstitutional and prevents health care facilities from providing a safe environment for patients. A decision by U.S. District Judge Donald Molloy was pending as of mid-November.

A third lawsuit, filed by a Sidney law firm in state court, is also seeking to strike down the law. A Richland County judge previously declined to block the state from enforcing the law while the case is pending, and on Nov. 16, the state Supreme Court backed the judge’s decision.

The U.S. Constitution recognizes sovereign tribes as nations with the power to self-govern. Shannon O’Loughlin, the CEO and a lawyer for the Association on American Indian Affairs, said that according to long-standing federal law, tribal sovereignty takes precedence over state law on matters related to protecting the health and welfare of tribal citizens.

Kekek Stark, a law professor and co-director of the Indian Law Program and Margery Hunter Brown Indian Law Clinic at the University of Montana, said that one critical question in jurisdictional disputes is whether a state tries to enforce rules on “fee land” — which can refer to a property within a reservation’s boundaries owned by non-Indians — or tries to regulate a business incorporated under state law. He cited as another key factor whether a tribal nation has a law in place that differs from state law, adding that the tribal law would take precedence.

“The absence of regulation, in some regards, allows the other sovereign — whether it’s the state or the feds — to begin to occupy the space,” Stark said. “It’s not absolute that they could still regulate; it just becomes an easier argument when the tribe hasn’t done so.”

Starting in 2020, at the height of the pandemic, tribal leaders shut down the eastern entrance to Glacier National Park — prioritizing the opportunity to slow the virus’s spread over the economic engine of tourism. Throughout the pandemic, they also enforced stay-at-home orders with fines, invoked mask mandates based on case numbers, and created a $5,000 penalty for anyone who ignored quarantine orders. The prevention measures worked. The reservation saw a steady decline in covid cases, and the federal Centers for Disease Control and Prevention pointed to the Blackfeet Nation as an example to follow.

Attorneys for the port authority contend that when its meetings returned to tribal land last year, a Blackfeet tribal ordinance was in place that included “mandatory vaccination with exceptions,” according to court documents. Carter, with the Native American Rights Fund, said the ordinance allowed some entities to invoke vaccine mandates. At the time of the meeting, Blackfeet Community College required anyone on campus to show proof they had been vaccinated against covid, according to its 2021-22 school year covid policies.

Blackfeet tribal officials and port authority attorney Terryl Matt did not respond to requests for an interview.

Enforcement of the law falls to the Montana Department of Labor and Industry’s Human Rights Bureau. Jessica Nelson, a spokesperson for the department, said the agency doesn’t comment on pending litigation.

In court documents, the state argued the case isn’t about the validity of a tribal ordinance or the Blackfeet’s right to enforce that ordinance if it exists. Instead, lawyers for the state wrote, it’s about whether nontribal organizations like the port authority can avoid state scrutiny on tribal land.

Attorneys for the state contend Montana officials want to ensure non-Indians aren’t discriminated against “merely because they step foot onto tribal land,” according to court filings.

The Blackfeet tribe has authority to regulate tribal and nontribal members alike on its land under the 1855 treaty, attorneys for the tribe argued in court documents.

The state also questioned whether the port authority held the meeting on tribal land specifically to skirt state laws. In an affidavit filed in October, Brenda Schilling, the port authority’s executive director, said that the meeting was held in Browning because the organization was returning to pre-pandemic routines and that it’s an issue of fairness to people who live on the reservation. She said participants could tune in remotely.

Myers, who filed the original complaint against the port authority, said he feels as though people in the community view him as an opponent of tribal sovereignty. But he said that wasn’t his goal, adding he wanted to hold the port authority accountable.

“Which laws are they following? Which jurisdiction? They can’t serve two masters,” he said, referring to state and tribal laws.