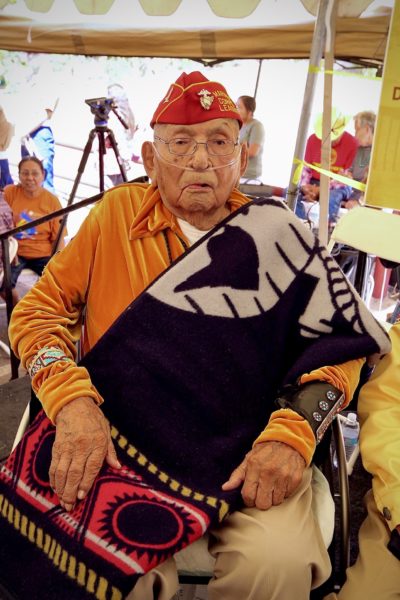 WASHINGTON — Navajo Code Talker Joe Vandever, Sr., who passed away five days before his 97th birthday in January, will have his place of honor in the Congressional Record. U.S. Senator Tom Udall (D-N.M.), vice chairman of the Senate Committee on Indian Affairs, submitted a speech honoring the life and service of Vendever to the Congressional Record, according to a press release distributed by the senator’s office.

Vandever, along with other Navajo Code Talkers, helped the United States military communicate across the Pacific using a code that the Japanese never managed to break. The Navajo Code Talkers participated in every major Marine operation in the Pacific theater and helped save the lives of their fellow Marines and give the military a strategic advantage throughout the war. The program remained classified until 1968, but the Navajo Code Talkers gained the recognition they had earned in 2001 with the Congressional Silver Medal.

“Joe epitomized the bravery and skill of the Navajo Code Talkers,” Udall said. “Joe’s Navajo name means ‘going places,’ and he certainly did during the war. Serving in the 6th Marine Division from 1943 to 1946, Joe was stationed on 16 battleships – serving from Samoa to Guadalcanal to Guam to Japan to China. Joe translated messages from Navajo to English, and set up communications posts on the front lines.

Vandever enlisted with the U.S. Marine Corps in Santa Fe, N.M. on March 26, 1943 and was honorably discharged as Corporal on Jan. 22, 1946. He served in northern Solomons, Bougainville, Emirau Islands, Guam, Marianas Islands, Okinawa, Ryukyus Islands, Occupation of Japan, and Occupation of China. In 2001, he received the Congressional Silver Medal for his service as a Navajo Code Talker in World War II.

Udall highlighted Vandever’s commitment to his language, culture and people. “Joe was fiercely proud of the Navajo language. According to Joe, ‘Our language is powerful,’ and ‘we [won] the war with our tongue.’ He wanted younger generations to learn the language and counseled them: ‘Don’t ever leave your language.’

“Joe was a loving family man. After the war, he came home and married Bessie, to whom he was married for 73 years, until she passed away on September 24, 2019. He and Bessie had 9 children, 36 grandchildren, 55 great-grandchildren, and 1 great-great grandchild. He inspired them and encouraged them to pursue higher education, and he was beloved by them all,” Udall said in his submitted speech.

“Joe lived a long life, and a good life – with kindness, optimism, good humor, integrity, and commitment and love for family and community,” Udall concluded. “His light will continue to shine bright in his children and his future generations. I am honored to pay tribute to Joe Vandever – who faithfully served our nation and his family and Tribe,” Udall continued.