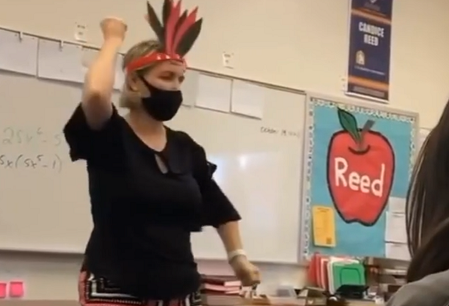 RIVERSIDE, Calif.—A Riverside High School math teacher may know a lot about  trigonometry, but she lacks wisdom on life matters—especially when it comes to Native Americans relations.

A video  that went viral on social media shows a Caucasian teacher prancing among students in a classroom, wearing a headdress—with feathers made from construction paper—in an attempt to dance like an Indian. She even threw in a tomahawk chop. The video captured her making chanting-like statements and pretending to pray at her desk. She reportedly chanted “SohCahToa” to help students remember trigonometry terms sine, cosine, and tangent.

The video was filmed by a Native American student during his trigonometry class on Tuesday.

By Thursday afternoon, the Riverside Unified School District had released a statement in reaction to the video, saying the teacher was placed on leave pending an investigation.

The video was posted by Akalei Brown (Kanaka-Maoli and Taos Pueblo), a graduate of the Native American Studies program at UC Davis and Native history and culture consultant and an advocate for foster youth. Brown says she posted a portion of the video with permission of the unnamed Native American student’s parents.

Brown posted on her Facebook page: “After watching the full 6-minute video I was left physically trembling. I may have left out pertinent details in the video, but my hands were shaking so hard that’s all I could manage to clip to post.”

“I felt it necessary to share this video with the world so they could have a small glimpse into the type of abuses Native children face in US schools everyday. This is not a one-off scenario. Halloween is just around the corner,” Brown writes.

The video raised the ire of Native Americans across Indian Country.

“We’re outraged and shocked by a California teacher’s behavior where she is seen in videos wearing a headdress and mocking Native cultures. This conduct is extremely disrespectful and unacceptable. The videos have been shared widely on social media and were reportedly filmed by a Native American student who was in the classroom at the time of this incident. The student states he began filming because he “felt that violence was being committed against him and he had the right to record,” Crystal Echo Hawk, founder and executive director of IllumiNative said in a statement on Thursday afternoon.

In a statement issued with Assemblymembers Jose Medina (D-Riverside) and Sabrina Cervantes (D-Corona), Ramos said, “We fully condemn the actions that took place at John W. North High School earlier this week. The teacher’s behavior was highly inappropriate and offensive.”

The Riverside Unified School District's statement acknowledged the recording and said,  "These behaviors are completely unacceptable and an offensive depiction of the vast and expansive Native American cultures and practices. Her actions do not represent the values of our district."