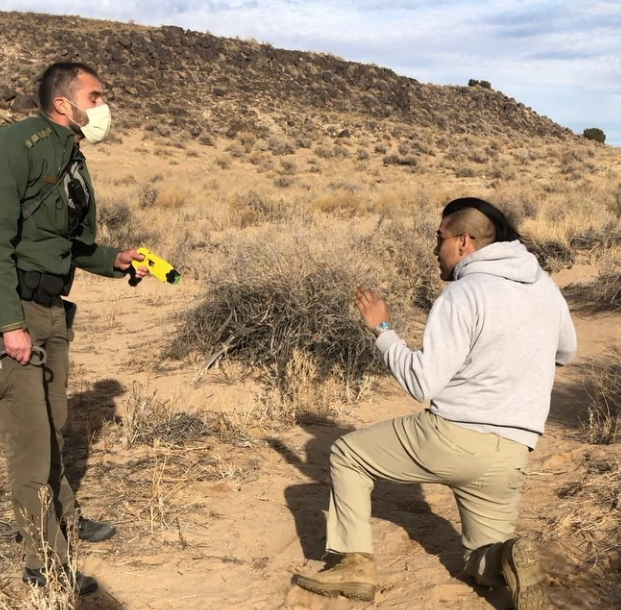 ALBUQUERQUE — What started as a Sunday walk at Petroglyph National Monument by a Navajo/Oneida man ended in a confrontation with a National Park Service ranger that left the Native man screaming on the ground after he had been tased multiple times.

The incident has drawn the attention of several members of Congress.

American Indians consider the New Mexico monument sacred and go there to pray. Hiking is allowed on designated trails to protect the archeological integrity of the monument.

A 9-minute 15-second video on the NPS website shows an unidentified NPS ranger attempting to secure the identity of the man who was walking off the trail with his sister and his dog.

Darrell House (Navajo/Oneida), a U.S. Marine veteran, posted his own video of the incident, taken on his cell phone, on Instagram.

House told the ranger he and his sister left the trail to practice social distancing after they saw a large party approaching them.

The ranger told the man that they were not authorized to be off of the trail and then asked House for his identification. House refused to comply with the ranger’s request and began walking away from the ranger. The ranger followed after House and his sister.

The NPS video shows House continually refusing to provide his identification and then eventually saying his name was Jerald Humphrey. The park ranger appears increasingly irritated by House’s refusal to cooperate with him.

During the interaction, House responds to the ranger’s request by saying, “Natives Americans and the government and law don’t mesh well, you know that. We’ve had our differences before. You’re on our land.

About seven minutes into the video, the ranger told House to give the dog to the woman.

“My dog ain’t going anywhere,” House told the ranger and began to walk away from the ranger.

“Stop walking or you may be tased,” the ranger warns House, who kept walking. Standing a short distance from House, the ranger tased House, who fell to ground screaming.

The video cuts off at 9 minutes and 15 seconds.

The NPS says it is investigating the incident. In a news release, NPS said:

“In accordance with National Park Service policy, this incident is under review and was referred to the NPS Office of Professional Responsibility, our internal affairs unit, for a thorough investigation. That investigation will include interviews with the officers, those involved, and any other witnesses who were in the area at the time of the incident. Investigators will also review the video captured by one of the individuals and later posted to social media, as well as the body worn camera footage worn by the NPS law enforcement officer.”

"We are shocked by the video of a National Park Service ranger tasing Darrell House at Petroglyph National Monument on Sunday. We have asked for an immediate investigation into the incident and expect a full accounting of what happened. This landscape is sacred to Tribes and holds deep meaning for the people of New Mexico. Everyone should feel safe and welcome on our public lands."

Grijalva requests four pieces of information on the recent incident: