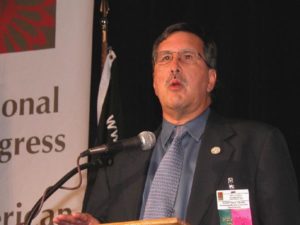 In remembrance of his past service as a tribal president and a tribal councilmember, the Stockbridge-Munsee Community has ordered that flags be flown at half-staff from January 23, 2020 to the time of burial service.

Chicks served as tribal president from 1997 to 2013 with a one-term break in service. He also served as well as serving as a tribal employee and as a member of the tribal council.

“Bob was a tremendous leader for not only the Mohican Nation, but for all of Indian Country. We have come a long way because of his important work,” said Stockbridge-Munsee Band of Mohicans President Shannon Holsey. “We are greatly indebted to his stewardship to the environment, the protection of our sovereignty, the vision he had for our Nation and our tribe’s growth and economic advancements.”

During his time on tribal council, Chicks provided leadership and guidance on a wide variety of development projects and other issues. Chicks was a driving force on the work to reach a self-paying settlement for the Tribe’s New York State land claims through a casino in the Catskills. The Tribe’s current Health and Wellness Center and the Pine Hills Clubhouse were built while he was tribal president, and construction began on its current Mohican North Star Gaming and Resort facility during his tenure. The Tribe also developed the Little Star gas station and its Mohican LP Gas Company businesses while he was tribal president.

Along with his service to the Tribe, Chicks also took a leadership role as part of national and state Indian organizations including the National Congress of American Indians and the Midwest Alliance of Sovereign Tribes.