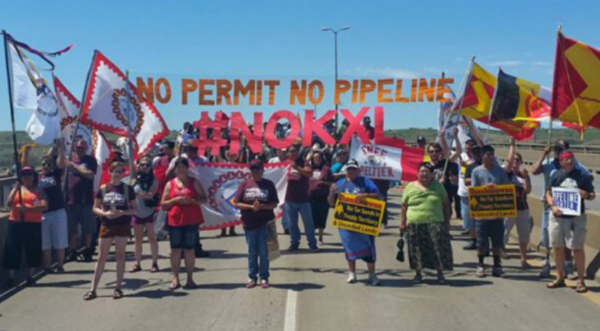 The approval comes just months after the same pipeline leaked 383,000 gallons of oil in North Dakota wetlands, creating one of the largest oil spills in the country over the past decade. When pipelines fail, the health of Indigenous and rural communities who depend on these water sources is threatened, according to environmental experts.

"To ignore the rights of tribes and reservation residents is a blasphemous act,” Joye Braun, a community organizer with Bemidji, Minn.-based nonprofit Indigenous Environmental Network said in a statement.

“It is not preserving the water or the rights of Indigenous and Native people of this state and those downstream. The board has acted out of a misguided sense of loyalty to big oil and for political party loyalties, beholden due to campaign donations. We will continue to stand in solidarity to protect our water, the rights of all indigenous people here and along the Keystone XL project," Braun said.

South Dakota tribes including the Rosebud Sioux, Yankton Sioux, Cheyenne River Sioux and the Great Plains Tribal Water Alliance have and will continue to be vocal about their opposition to the KXL. They do not want this toxic tar sands pipeline near Indigenous lands and communities, nor further development within the tar sands region of northern Alberta.

Critics say Calgary-based TC Energy, formerly known as TransCanada, continuously ignores tribal nations across the Medicine Line, a 100-mile stretch of the U.S.-Canadian border in northern Montana. TC Energy’s Coastal Gaslink, a 670-kilometer fracked gas pipeline that would carry natural gas from Dawson Creek, B.C. to a facility near Kitimat, B.C. The gaslink pipeline is being pushed through the Wet’suwet’en Nation, despite land protectors blocking the proposed route.

"I'm not mad, I'm just disappointed in not just the water board but the governor, too,” Zora Lone Eagle, age 13, youth intervenor MniWakan Nakicijinpi Cheyenne River Sioux tribal citizen said in a statement. “TransCanada paid her off to approve the water permit and she doesn't realize she uses water from the river, and it's not something to just throw away."

“You can believe this is not the last word, we have only just begun."