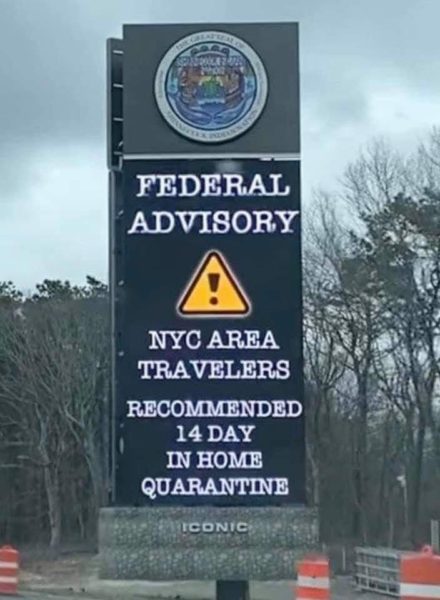 SHINNECOCK NATION — Irony has its place in tribal nations holding on to their sovereignty rights.

Located some 90 miles outside of Manhattan, the Shinnecock Indian Nation serves as a gateway to the Hamptons, where the tribal nation’s neighbors live in posh mansions for the rich and famous. Last year, the Shinnecock Nation, through a joint venture with a billboard company, built a 61-feet electronic digital billboard on a right-of-way along Sunrise Highway on Long Island as a means to help build its tribal economy through advertising revenue.

At the time the billboard was erected, the Shinnecock Indian Nation faced strong resistance from the adjacent town of Southampton, which served the tribal nation with a cease-and-desist order. The town said the Nation began building the billboard without the proper local permits. As a federally recognized tribe, the Shinnecock Nation maintained because it is a sovereign nation, it did not need to even apply for local permits.

The Shinnecock Indian Nation kept building the billboard. Soon the State of New York Dept. of Transportation sought to stop the billboards from being built.

“He is the one that pushed the state to act on our sign,” Gumbs said. “The New York Department of Transportation sued us on those bogus charges of no permits and the sign being a safety hazard.”

The State Department of Transportation and the State of New York brought a lawsuit against all seven members of the Shinnecock Indian Nation tribal council.

Still, the Shinnecock Indian Nation persisted and kept building the billboard. The state lawsuit is pending.  The billboard is operational.

Suddenly, the COVID-19 pandemic hits and it is the largest threat to public health in modern times, particularly New York, which has become the epicenter of the pandemic in the United States. Last night, NPR reported there were 53, 339 cases and 827 deaths in the state of New York.

Last week, Southampton Town Supervisor Jay Scheiderman contacted Shinnecock Nation tribal officials to see if they would be willing to post some messages about the efforts to stop the spread of the deadly virus. He knew travelers would be passing through from Manhattan and other parts of the East Coast to find shelter in their summer homes during the in-home quarantine period.

“We thought we would turn to the billboard to help get important public health messages out, so we reached out to the tribe,” Scheiderman told Native News Online. “We wanted them to post messages such as, ‘Stay Safe – Stay Home;’ ‘Hotline 311;’ and the federal advisory that ‘recommended 14-day in-home quarantine.’”

In response to Scheiderman’s request, the Shinnecock Indian Nation said it was more than willing to assist get the important messages out to the public.  So it lit up the contested billboard with health and safety messages.

“We had always envisioned the signs to be used as a public service announcement tool in times of emergency situations like this. The Town came to us and asked if we could put the COVID-19 information and warning PSAs up,” Gumbs said.

Schneiderman, who opposed the billboard last year, now says he would be willing to be part of negotiations that helps to end the lawsuit.

“We will be discussing the lawsuit with the state and town when this is done.” Gumbs told Native News Online late Friday night.

Earlier on Friday, Schneiderman sent a letter co-signed by three members of the Shinnecock Indian Nation Tribal Council to New York Gov. Andrew Cuomo, asking him to restrict nonessential travel to the Hamptons.