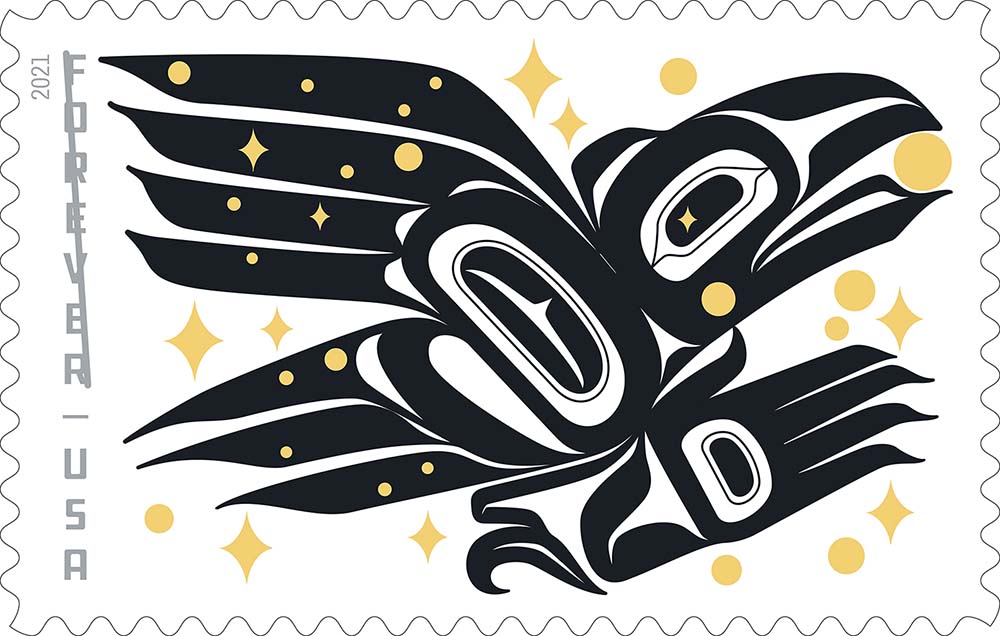 Raven is swooping in, and making snail mail look snazzy.

Surrounded by twinkling gold stars, with the sun in his beak, the Trickster of Tlingit culture is the star of “Raven Story,” the new Forever Stamp by Tlingit and Athabascan artist Rico Lanáat’ Worl. 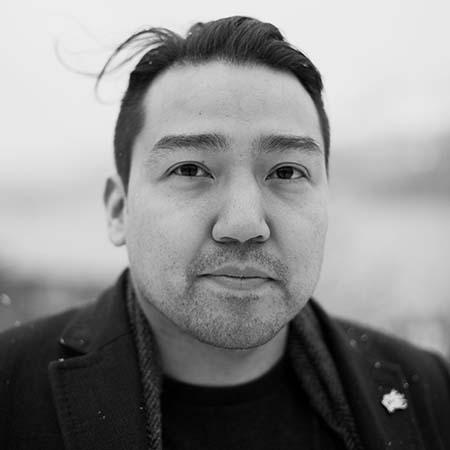 Tlingit and Athabascan artist Rico Worl designed the new "Raven Story" USPS stamp. (Rico Worl)“Raven Story,” believed to be the first USPS stamp designed by an Alaska Native, was unveiled last month. It will be in circulation in 2021 at a date yet to be announced.

“It's pretty awesome. I always like to say that for my people, that Raven transforms and so it's just exciting to see him transform in this medium,” said Worl, who lives in Juneau, Alaska. “I hope that as a designer I can represent on a national scale the modernity of Native people — that we're engaged in modern culture while still carrying forward our traditional heritage.”

Radiantly representing his heritage and acting as a cross-country messenger of Tlingit culture is part and parcel of Worl’s life’s work.

Artist, educator and expert at merging modern style and traditional culture, Worl has made a name for himself as a master of the ovoid-based Northwest Coast formline style, co-owner of funky art, clothing and accessory brand Trickster Company, and as a teacher and social designer with Juneau-based Alaska Native arts nonprofit Sealaska Heritage Institute.

Worl said he made Raven the central symbol because he plays an essential role in many traditional Tlingit stories. Worl also has personal ties to the Trickster. He is Raven moiety of the Sockeye Clan, the L'uknax.ádi, and he grew up with tales of the cagey creature.

“My grandma told me stories and I also distinctly remember there was a VHS video that I had when I was growing up called ‘Raven and the Box of Daylight’ and I'd watch it every other weekend or so,” Worl said.

The stamp immortalizes a thrilling moment from the story of Raven setting free the sun.

“Many depictions of this story show Raven with the sun in his mouth representing the stealing of the sun. I was trying to showcase a bit of drama,” Worl said. “The climax of the story is after Raven has released the sun and the moon and has opened his grandfather’s final precious box, which contained the stars. In this design I am imagining Raven in a panicked state of escape — transforming from human form to raven form and holding on to as many stars as he can while trying to escape the clan house.”

Antonio Alcalá, the art director who proposed the stamp project to Worl, and collaborated with him and Worl’s artist sister Crystal to perfect it, is impressed with the star-studded result.

“It's a beautiful stamp,” Alcalá said. “The little stars are all gold foil, so they really look spectacular.”

Alcalá is also optimistic about “Raven Story’s” potential to introduce Tlingit identity to a country that generally isn’t versed in Alaska Native art and tradition, and cement it as a dynamic and essential element of American life.

“A challenge with representing Native communities and Native art is that the broader American culture imagines them as not progressing… Tlingit culture and its contributions are worthy of presentation on a stamp,” he said. “Stamps are one of the few ways that the United States has to brand itself. There's the flag of course, and there's money. But stamps are one of the only other official U.S. government visual forms that go out to everywhere in the country and announce to the country and really to the world, that these are the things we find are important and valuable and worthy of commemorating.” 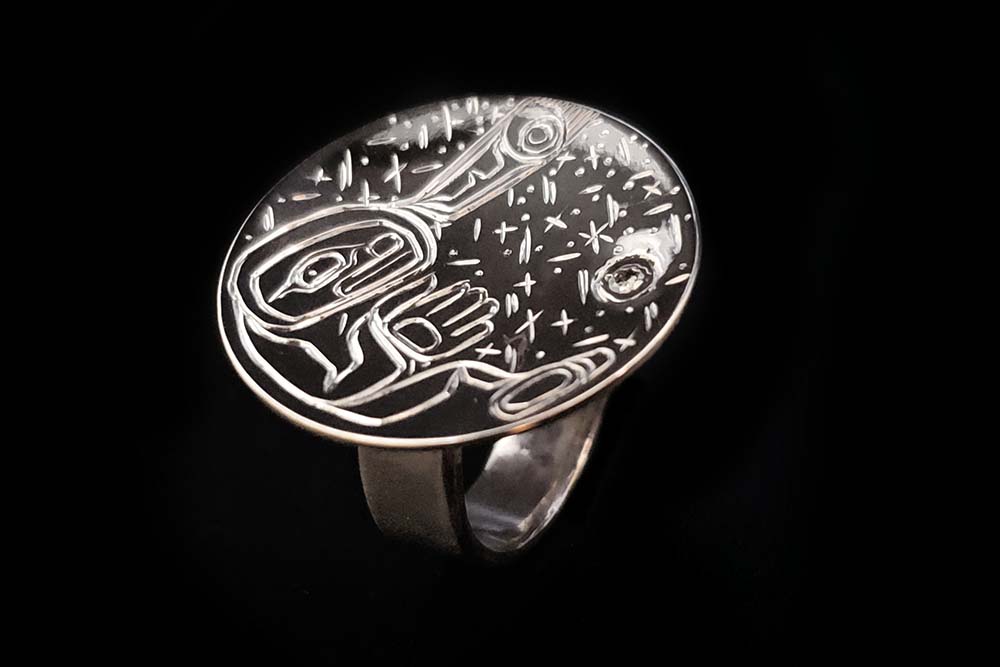 The work of Worl and Trickster Company first drew Alcalá’s interest at the gift shop of the Smithsonian’s National Museum of the American Indian in Washington D.C.

“It was not what I was expecting to see in the gift shop,” Alcalá said. “What caught my eye, was their contemporary take using traditional subject matter.”

Formline basketballs and skateboards are two of the items Trickster has become known for since the company, which sells work by Worl, his sister Crystal and dozens of other regional Native artists, launched six years ago.

Like several other retail and art businesses in Juneau, the Worls had to close the brick and mortar Trickster shop this summer because of the absence of tourists due to Covid-19.

The store may be gone, but Trickster is still doing solid online business and staying true to the company’s core values of authentically representing Southeast Alaska Native identity and values with a lively pop and modern vibe.

Since the beginning, the business has reflected the real lives of its founders.

“Trickster Company started when I painted my clan crest on my longboard, just to represent,” Worl said. “Native art is always about representing. So, I wanted to represent a day-to-day modern lifestyle thing as an Indigenous person, which was learning how to longboard.”

The longboard got around. Worl’s cousins and more people started asking for them, and it became clear that Worl’s instinct was a wise one.

“For Native people especially, it was doing something they were taught was important, which is to represent. And at the same time it was kind of a gateway to relate to non-Native people so they could learn more about Native art,” Worl said. “That was where I got the spark of the idea; the direction to use modern lifestyle. It just made sense to me because that's the way I live my life.”

Worl was already a prominent part of the art world before Trickster took off.

He was integral to the development of the art department at Sealaska Heritage Institute, a nonprofit perpetuating and promoting Southeast Alaska Native art, where he taught Native artists fundamental skills and helped them gain access to art-making resources.

Given all of the talent, time and innovation Worl has devoted to championing Tlingit culture, it makes sense that he and Raven will soon be sending the sun, stars and Southeast Alaska style to a mailbox near you.

“I'm just really hoping that people are inspired by the stamp, not just by the art itself, but inspired to get deeper into it, even if it's just doing a few Google searches like, ‘Who are Tlingit people?’ ‘What is Tlingit art?’ ‘What is formline?’ I hope it is a gateway for people's learning.”