Q&A: Sen. Tom Udall Reflects on His Work in Indian Country as He Leaves Senate 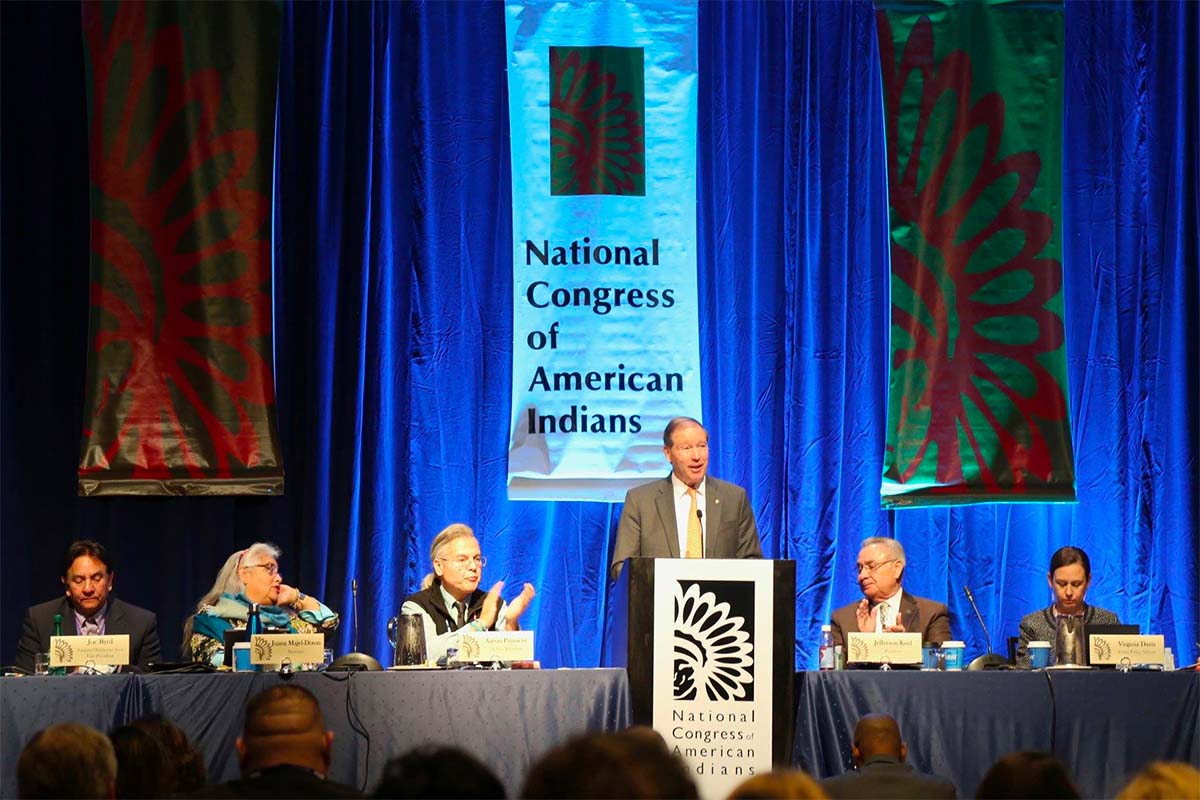 WASHINGTON — As the 117th Congress concluded its term Sunday, so did the Senate career of Tom Udall, who served two terms representing New Mexico. He announced his retirement from the Senate in March 2019.

Since 2017, Udall has served as vice chair of the Senate Committee on Indian Affairs.

In his farewell address to the Senate, Udall mentioned his work to improve lives in Indian Country.

“As I talk about my love of the land, I cannot neglect to acknowledge how much I have learned from the original stewards of this land – Native Americans,” Udall said. “I got my start in politics working with my father, fighting alongside the Navajo uranium miners who had been hurt by this nation’s nuclear weapons program.”

“My work as vice chair of the Indian Affairs Committee has been the honor of a lifetime. And another area where we’ve achieved bipartisan progress,” Udall continued.

Udall spoke with Native News Online a week before Christmas to reflect on his work in Indian Country during this time in the Senate.

What Indian Country legislation makes you the proudest for authoring?

Sen. Udall: First of all, I would just say the great thing about representing New Mexico in Congress is you get to represent a state with one of the largest Native populations in the country. It's been such an honor to represent New Mexico's 23 tribes in the Congress.

As vice chairman of the Indian Affairs Committee, a role I took on in 2017, I've gotten even more opportunities to work closely with tribes on issues that are important to them. And the time I've spent alongside tribal leaders and advocates has been a privilege and I've seen a lot of change over time in Congress, a lot hasn't changed fast enough.

Together, over the 20 years, I think we've made great strides. I think the areas that I've really focused my attention on, in consultation with tribal leaders, and these are the three big over areas, just starting to get to your question now. The big, overarching areas, reinforcing the principles of tribal sovereignty and self-determination because decisions made by tribes produce the best outcomes for tribes. That's the first big area.

Some examples of bills we passed are the Chaco Culture National Historical Park, the Antiquities Acts of 2018 and 2019, Tribal Wildlife Corridors, Native Americans Voting Rights, I mean, this is all a big area. Then one named after a particular moving woman, Esther Martinez, who was a preserver of Native languages from New Mexico: the Esther Martinez Native American Languages Program Reauthorization Act, and that's really pushing hard on keeping Native languages and making them stronger and giving tribes the resources to do so.

Then supporting Native economies and healthcare, and trying to improve public safety, and then protecting Native cultural resources and languages is the third area. I'm proud of what we've done, but for many people the Covid pandemic has opened their eyes to just how much the federal government fails to live up to our obligations to tribes.

The examples there, that I'm very proud of, increased federal funding for IHS health care facilities, construction and improvement programs, $2 billion dedicated to Covid-19 resources to Native health systems and permanent reauthorization of the Indian Health Care Improvement Act. Then we also have a law called the CDC Tribal Public Health Security and Preparedness Act.

Unfortunately, it's been that way for a long, long time. As you know, and have reported, injustice is really at the core of how this nation has treated Native Americans throughout our history. Until we correct that our work won't be finished, so after I leave the Senate I'm going to keep working alongside Native leaders and communities to make sure that the federal government is living up to its promises. That's really our obligation.

On the other end of the spectrum, in what area for Indian Country, do you wish you could have had more success? What is still lacking?

Well, the thing that concerns me the most, we're in the middle of a pandemic. It has hit Indian Country very hard. You don't have to look very far in New Mexico to the Navajo Nation, which everybody remembers because it’s all over the television, how New York City was the biggest hotspot in the country. Well, the numbers, if you work them out per capita, the Navajo Nation had a much tougher time and is still having a very difficult time.

So, I think the relief that we can bring to Indian Country to help with their approach to the Covid-19 pandemic is tremendously important. I was very proud that, in the original CARES Act, for the first time we got $8 billion for Indian Country. Then you add the other $2 billion, it was up to $10 billion. But we were asking for $20 billion.

You mentioned the Esther Martinez Act. The Cherokee Nation has lost 20 fluent Cherokee language speakers from Covid-19. I know that the Cherokee Nation is concerned and other tribes are concerned about the people they're losing who are fluent in their languages. You well know, maybe better than I do, there's a real need to preserve that language.

Yeah, well I'm so sad to hear about those deaths. It's a real tragedy when we lose people in the community that really know the language well, I'm sure contributed to helping young people learn the language, and I'm just very sad to hear that.

I'm a little subjective here, but I think Navajo Nation President Jonathan Nez has done an outstanding job trying to manage the Covid-19 pandemic. He had only been in office 14 months or so when it hit, so I think he has risen to the occasion. Indian country is pretty proud of him.

Yeah. I'm very impressed with President Nez. He's worked hard on this. He's put himself in danger, going out in tribal communities and really seeing what's going on. He's very courageous in confronting this and he's taken an even tougher stance than some of the states. I mean, he's had curfews in place when the numbers get really, really high. Curfews for an entire weekend, a Friday, Saturday and Sunday. Those are very strict, strong measures and he's taken those.

Are you wanting to reveal what you're doing next after you leave the Senate? Will you be in the new presidential administrations?

As you probably know, there's a foundation called the Udall Foundation. It sends Native American interns to Washington every year to work in the federal government. Then there's another side of it that's a scholarship program for Native Americans that are interested in tribal policy and tribal health. There are many, they're in the thousands now, of young people that have either been fellows or scholars, that I stay in close contact with and I'll be working with many of them to help out with the challenges they face in their communities.