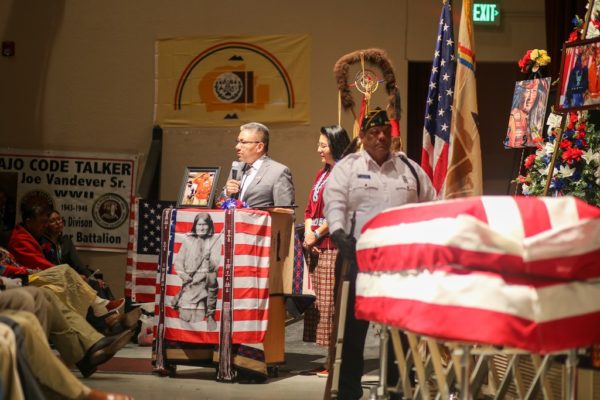 During the service, Vice President Lizer presented the proclamation and a Navajo Nation flag to the family of Vandever, and offered his condolences on behalf of the Navajo people.

“As we mourn the loss of Navajo Code Talker Joe Vandever, Sr., we also honor and remember all his great sacrifices for our Navajo people and the entire country. Our thoughts and prayers are with his family, friends, and community members as they lay him to rest,” said Vice President Lizer.

Vandever enlisted with the U.S. Marine Corps in Santa Fe, N.M. on March 26, 1943, and was honorably discharged as Corporal on Jan. 22, 1946. He served in northern Solomons, Bougainville, Emirau Islands, Guam, Marianas Islands, Okinawa, Ryukyus Islands, Occupation of Japan, and Occupation of China. In 2001, he received the Congressional Silver Medal for his service as a Navajo Code Talker in World War II.

Vandever will be laid to rest on Thursday, Feb. 6 at 1:30 p.m. at the Santa Fe National Cemetery in Santa Fe, New Mexico.