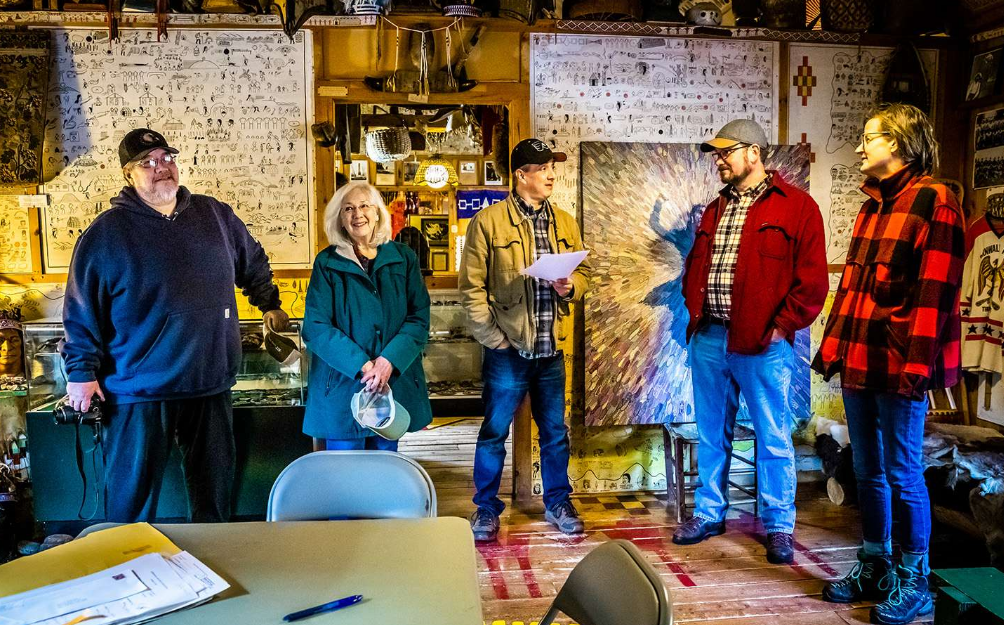 [NOTE: This article was originally published by the Adirondack Explorer. Used with permission. All rights reserved.]

Home to more than 3,000 artifacts, the center is located on county Route 60 in Onchiota, about 12 miles north of the village of Saranac Lake. Its mission is to educate the public about “Haudenosaunee culture specifically, and Native American history in general.”

For nearly 70 years, the Fadden family owned and operated the facility as the Six Nations Indian Museum on their land. The six nations, the Mohawk, Oneida, Onondaga, Cayuga, Seneca and Tuscarora, comprise the Haudenosaunee (Iroquois) Confederacy.

The Faddens are members of the Mohawk Nation.

In 2020, the family transitioned the museum into the nonprofit cultural center and started exploring ways to expand.

Executive Director David Kanietakeron Fadden said the land purchase will allow the organization to move the museum from its current location and build a new facility on the newly purchased land, which is located south of Route 30 across from the Buck Pond Campground owned by the state. The property has frontage on Route 60, in addition to being connected to the Debar Mountain Wild Forest.

The plans for a new facility call for a 60 by 200 foot building in the form of a traditional longhouse, Fadden said.

“It’s going to be a state-of-the-art facility, using all the green technologies available, geothermal, solar, wind as well,” said Fadden, who is on the board of directors at the Wild Center in Tupper Lake.

The estimated cost of the new facilities is $5.3 million, and staff is working to raise that money.

The current structure, built in the 1950s by David’s late grandfather Ray Fadden in the style of a Haudenosaunee bark house, will be moved down the road and located inside the new structure. Fadden said the older museum will be “the heart” of the new center and remain mostly untouched. It’s roughly 20 feet by 80 feet.

The center will also feature Native American art. Like their grandfather Ray, and father, John Fadden, David and Donnie Fadden are both artists and storytellers. In past years, summer storytelling nights around a campfire were big draws of the museum.

In addition to the new facilities, Fadden said the center and Adirondack Land Trust are planning to put an easement on about 300 acres that reflects an “indigenous philosophy of land use.”

“I think it’s the first of its kind in the Adirondack Park,” he said.

The organizations are collaborating with Indigenous advisors on a long-term vision and plan to care for the land.

Fadden expects there will be little development on the easement, perhaps just a trail or two. The land will be used for outdoor education programs for young people from Native and non-Native communities, and for Haudenosaunee traditional uses, including medicinal plants. The center is already a field trip destination for area school groups and summer camps.

“The center and the land trust share a common belief and philosophy with regards to preservation, conservation and stewardship of land,” Fadden said. The Haudenosaunee, he said, contemplate to the seventh generation ahead “when thinking about how the decisions and actions we make today impact those who will come after us.”

“This collaborative effort to protect this acreage will, in my view, provide a place for experiencing, appreciating and learning about the beauty and gifts the land provides,” he said. “Recognizing what values and concerns both our organizations have about the future of the Adirondacks and the world in general, this acquisition will ensure that this land will be protected for many generations to come.”

The land trust purchased the property in August for its appraised value of $207,500, then sold it to the cultural center on October 31 for $103,750, giving the discounted price as part of its partnership.

“While we applied a typical land-protection tool by buying the land, we have much to learn from Native concepts of caring for and preserving land. It is truly an honor to be working together to design a lasting agreement to conserve the natural integrity of this property in a way that incorporates and respects Haudenosaunee cultural values and uses,” said Chris Jage, conservation program director.

The 333 acres had actually been in the Fadden’s family for decades and was most recently owned by Denise Meyer, a cousin to Dave Fadden, who had decided to sell it.

Fadden said he was in the process of raising money to buy the land for the nonprofit center from his cousin, when Mary Thill, grants manager for the Adirondack Land Trust visited the museum. He told her about the expansion plans and soon after Fadden was in discussions with the land trust about working together.

Adirondack Land Trust closed on the property in early August, just days before the death of John Fadden. His parents Ray and Christine, along with him, opened the museum in 1954.

Ray Fadden, who was born in a farmhouse four miles east of the facility, was an educator who taught in schools, including St. Regis Mohawk School in Hogansburg. He also worked to pass on Native American culture and values. In addition to starting the museum, he created the Akwesasne Mohawk Counselor Organization in the 1940s. The goal of this organization was to educate Mohawk children in respect to Native history, woodcraft technologies, Mohawk traditions, and help them develop a positive self-image.

CORRECTION:  A previous version of this article listed Onchiota in Vermont. The town is in New York.