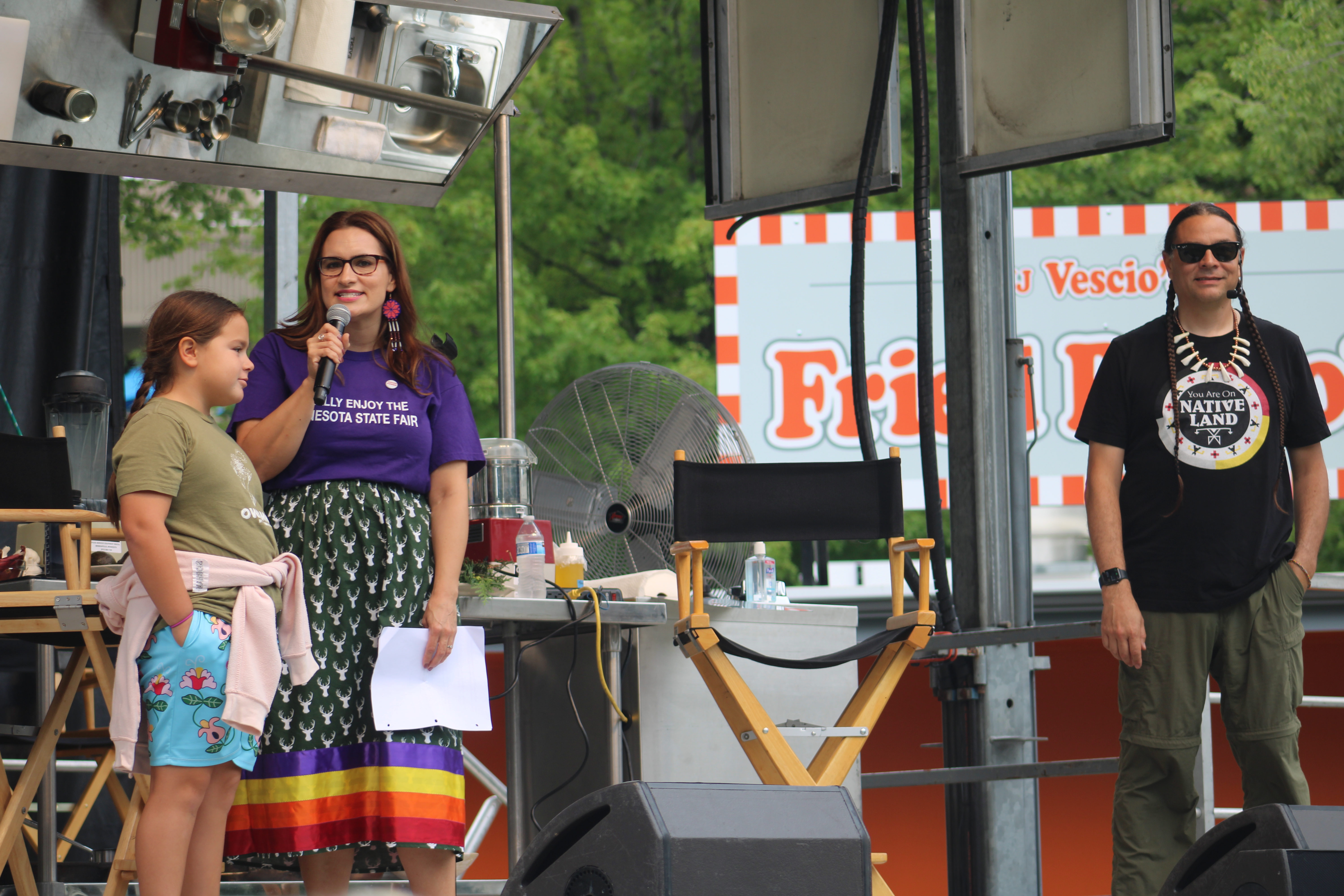 While Indigenous culture has been visible in previous years, this year Native American representation takes the stage, literally, to showcase one of the most popular reasons people attend the fair: food.

On Sunday, the North American Traditional Indigenous Food Systems (NATIFS), the nonprofit arm of the award-winning Native-owned restaurant Owamni, organized a full day of presentations featuring Indigenous music and food at Dan Patch Stage, one of the fair’s interactive stages. Indigenous chefs Sean Sherman, Dana Thompson and others from NATIFS and Owamni talked about Indigenous foods and Minnesota Indigenous music artists such as Keith Secola and hip-hop artist Tall Paul.

“It’s tough to talk about healthy eating and Indigenous foods while at the state fair,” said Owamni Chef and Co-Owner Sherman during Sunday’s presentation. Sherman joined with NATIFS Outreach Director Ron Kinneen (Tlingit) in a discussion about the colonization of food and its effects on Indigenous people.

Sugar, flour, and dairy — all foods celebrated at the fair — have had a drastic impact on Native Americans. Sherman said that in some Indigenous communities, up to 60 percent of the population has some form of diabetes.

'A part of Minnesota'

Coined the “The Great Minnesota Get-Together,” the fair had its beginnings in the 1850s, but highlighting Indigenous culture hasn’t always been a priority. It wasn’t until 2019 that all the state’s 11 tribes were showcased together at the fair’s education building in an interactive display.

“It is so exciting to see the growth in Indigenous representation at the Minnesota State Fair,” Minnesota Lieutenant Governor Peggy Flanagan, a citizen of White Earth Band of Ojibwe, said as she opened Sherman and Kinneen’s presentation on Sunday. “Indigenous lifeways, and our history, are a part of Minnesota and they belong at the state fair,” she said.

Rob Kelsey has been attending the Minnesota State Fair for 76 years. Kelsey has collected more than 1,300 cotton cloth seed sacks — the largest collection in the world. He displays nearly 400 cloth bags at the fair in the agricultural building.

Many of the sacks are brightly colored with printed advertising logos, slogans and pictures. In the late 1950s, paper sacks replaced the cloth ones, and today nearly all seed corn is sold in paper sacks.

“The most expensive ones are the ones that have images of Native people on them,” Kelsey said. When asked why he thinks those bags are prized the most, he said it is because of their intricate designs.