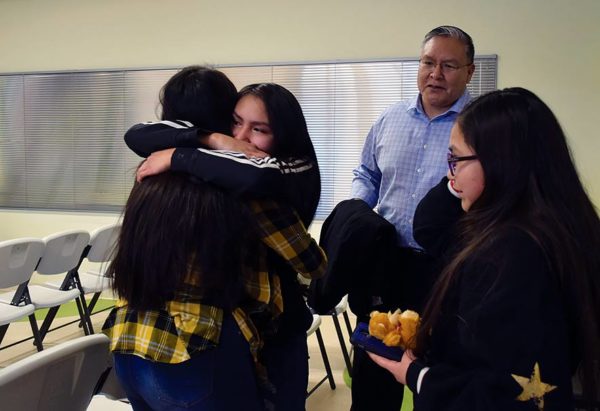 Editor's Note: This article first appeared in the Navajo Times. Used with permission. All rights reserved.

FORT DEFIANCE, Ariz. — Hailey Haven was confident at the mic. Her voice was steady and clear as she spelled “Himalayan,” then “calamitous,” “gannet” and finally her champion word “brevet” during Round 23 of the Fort Defiance Agency Spelling Bee.

She won over Michaela Kee from Ganado Middle School who was named runner-up and her cousin Jade Haven who won third place. “I have a legacy to fulfill,” Hailey said about her win. “It’s challenging. It’s such a burden because I have to live up to Kelly’s reputation. I don’t know if I can fill her shoes.”

Everyone is on a mission to fill the big shoes of three-time Navajo Times-Navajo Nation Spelling Bee champion Kelly Haven. Last year was her last bee, as she exceeded the age limit this year.

Last year, she was runner-up for the sixth grade agency spelling bee. She then made it far into the Navajo Nation bee where Kelly went head-to-head with Maria Macaraig for 106 rounds before becoming the victor. This year Haley took first place in the seventh-grade division for the agency bee and is poised to be in the top three at the Navajo Times-Navajo Nation Spelling Bee.

She has worked hard throughout the year to continue the Haven legacy. Hailey’s mother Dina Haven is the sponsor for the Spelling Bee Club at Tséhootsooí Middle School where Haven is an English teacher. “We’d always study after school, bring our snacks and our friends,” Hailey said with a smile. “Just studying and reviewing the words every single day.” Kelly has moved from competitor into a mentor role.

She now helps the next generation of spellers after school. “It’s actually pretty cool,” Hailey said. “She has so much experience. She gives it all to me and it’s so relieving. If I didn’t have her it would be so hard.” One of the biggest keys to competing successfully at the bee is controlling the nerves and anxiety. “I just take deep breaths — very deep breaths,” Hailey said.

She is looking forward to competing at the Navajo Nation bee. “(I’m) very excited and worried because there are a lot of wonderful spellers on the Navajo Nation and you don’t know who you’re going up against,” she said.

These two spellers are also being mentored by Kelly and Dina Haven. “It’s nice because then I get to see what it’s like when I was in their shoes and now I get to train them to the best of my ability and see how far they can go,” Kelly said. “If they get far it makes me pretty proud because I feel like I’m a part of that.”

It has been especially moving for her to be able to cheer on her little sister and watch her carry on the Haven legacy. “It’s hard and it’s emotional,” Kelly said. “Now, I see what it’s like to be on the other side and it’s emotional for me.”

When Hailey was named the seventh-grade champion Kelly hugged her sister and tears started to well in her eyes. It was clear Kelly was happy and proud of her little sister. “(Hailey) would cry for me and I never understood why it was so emotional for her,” Kelly said. “But when she won, it was like ‘Oh my gosh, I’m so happy for her. I’m so proud of her.’ She deserves this.”

The other two spelling champions in the upper grade divisions were also mentored by Kelly. Mia Stefaniak,12, has been spelling since she was in the second grade and went pretty far on her own. “I made it to regionals but I misspelled and I wanted to try again,” Mia said. So, she came back to the bee to give it her best but she didn’t make the school spelling bee in the fifth grade. This was her first time back at the agency bee and she took first place in the sixth-grade division.

“I study with Ms. Haven,” Mia said. This guidance is what has really changed the game for Mia. “It helped me better study,” she said. “The progress really paid off.” This was Mia’s first year with vocabulary folders and using websites like Quizlet to study for the bee.

“I have all the words of champions, level one, two and three, and I have all the definitions for the vocabulary test,” Mia said. “I just use that every day and sometimes, when I go to the study group I go to Quizlet and it has the words I have in my folders. It gives me a test and I can do the spelling too.” The group has also been learning tips about what to do and what not to do during the competition.

Talking to others during the competition can become a distraction for spellers. “What Ms. Haven taught me was, don’t let anyone bother you,” she said. “Don’t talk to anyone because you’ll lose your confidence. When I got up there I didn’t think about much. I just worried about what I was spelling.” Mia took the bee way more seriously this year and was given the tools to be successful. This was really a learning moment for her.

“What I learned is just really work hard to achieve your dreams and I did that and it really worked,” Mia said of her district win. Now she’s focusing on her next goal. “I don’t know if it will happen but I’m trying to make it to Scripps,” she said, referring to the Scripps National Spelling Bee in Washington, D.C. Her mother Kim Etsitty, who is originally from Chinle but lives in the Window Rock area now, was there to cheer her daughter on.

“She showed a lot of determination through this process and she was really looking forward to the spelling bee and counting down every day,” Etsitty said. “I’m just happy for her.” Both of Mia’s parents were there every step of the way to encourage her and help her to study. Mia has two more years to complete her goal of going to the Scripps National Spelling Bee. On the flipside, this is Jasmine Tree’s last year to compete in the bee. “It’s challenging for me,” Jasmine said. “It’s also an extracurricular thing I can do.”

Tree has been competing in bees since she was in the third grade. This year she won first place in the eighth-grade division at the agency bee. She practices alongside the Havens and the other members of the Spelling Bee Club. “They’ve encouraged me and given me a lot of advice,” Jasmine said.

This was her second year working with Dina Haven. Before this she was practicing at home with her family but the extra outside help has really helped. “Ms. Haven is the sponsor for the spelling bee and I thought that maybe she could help me out a little bit more and get me farther to Navajo Nation,” she said. This will be Jasmine’s third appearance at the Navajo Nation Spelling Bee. She went in the fourth grade and then again last year. “I’m just going to study hard and make sure that I can focus on vocabulary too,” she said. “And just try not to be nervous too.”

This has also been a great way for Jasmine to add new words to her verbiage. “It’s helped me improve my vocabulary and helped me do better in my academics,” she said. Jasmine said it feels good to be a champion after all the work she put into studying and the time she spent practicing. All together 11 schools took home either a champion, runner-up or third place award from the Fort Defiance Agency Spelling Bee. The Navajo Times-Navajo Nation Spelling Bee will be on March 11 in Kayenta at Nash Auditorium.