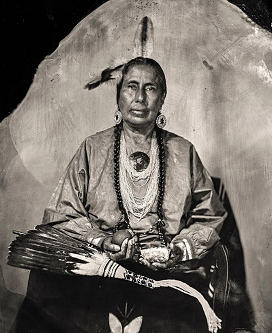 On May 5th, the newly designated National Day of Awareness for MMIWG, Native News Online held a forum, “Crisis in Indian Country: Missing and Murdered Indigenous Women.” One of the panelists was Chairwoman Shelly Fyant of the Confederated Salish and Kootenai Tribes (CSKT) from the Flathead Indian Reservation in Montana. She spoke about a holistic empowerment and self-defense facilitator training program for Indigenous women of which she is one of the founding council members.

The program training was created by a large and diverse Indigenous coalition, with leaders from the United States and Canada such as Gay Kingman, former executive director of the National Congress of American Indians (NCAI) and longtime leader of the Great Plains Tribal Chairmen’s Association, Patsy Phillips, a director of the Institute for American Indian Arts (IAIA), Judy Wilson, Chief of the Neskonlith Indian Band in British Columbia, and Montana State Representative Rynalea Whiteman Pena, who previously served as president of the Northern Cheyenne Tribe, to name a few.

The organizing body is called House of the Moon (HOTM) and although the Covid-19 pandemic impacted the delivery of the program, it went forward virtually for the pilot run. On April 27, seven Indigenous women from both sides of the Medicine Line (U.S./Canada border) graduated with a certificate of completion to become the program’s first holistic empowerment and self- defense facilitators.

Chairwoman Fyant said that the broad curricula intends to “draw connections between the assault on the sacred feminine, loss of reverence for life-givers, and the systemic and historical injustices playing out in the contemporary crisis Indian Country faces with MMIWG.”

The pilot was launched in the fall of 2020 where three women from First Nations in Canada and four women from Tribal Nations in Montana undertook the 12-week training course. Indigenous leaders presented on various topics such as physical and non-physical self-defense, taught by Melissa Moses, the Union of British Columbia Indian Chiefs’ (UBCIC) Women’s Representative and the first female Indigenous Muay Thai Instructor to be certified by the Sport Authority of Thailand and the Naikhanomtom Association in both Canada and the U.S.

Other training topics included the origins of MMIWG, traditional ways to heal and protect yourself and healing from historical trauma. In order to complete the training, the women were required to facilitate four HOTM Gatherings in their own communities, and each session covered one of four curriculum areas that include mental, emotional, physical and spiritual empowerment and self-defense. There were over 300 combined community members in attendance for the gatherings that the facilitators held for their pilot trainings.

LoVina Louie from Native Wellness Institute and one of HOTM core faculty presenters talked about the training by stating: “HOTM is an incredible spirit driven program that empowers indigenous women. They were transformed and armed with education, healing and self-defense as they became a voice in their own communities."

Casey Camp-Horinek, internationally respected elder and traditional leader, was the keynote speaker and held ceremony at the graduation where she honored the seven graduates of the program for their commitment to ending the MMIWG tragedy.

“House of Moon felt like the expansion of our Women's Teachings in a way that must have been gifted in dream and ceremony. To be among women of different nations and locations, yet gathered through the sacredness of Fire, Air, Water and Earth, proved to be an experience of empowerment only Wakonda could have guided," Camp-Horinck (Ponca Nation), an HOTM adviser stated.

When asked about prevention and what tribes are doing to address the crisis, Mary Kathryn Nagel, a panelist in the Native News Online forum, and one of the foremost Indigenous attorneys in North America, said of the HOTM initiative, “I think it’s an incredible example and one of the best examples that I’ve heard so far.”

“House of the Moon recognizes and believes that by empowering Native women, the ripple effect will go far and wide in all of our communities," Randy’L Teton, (Shoshone-Bannock Tribes), one of the HOTM advisers, elaborated.

HOTM guidelines and framework support facilitators in bringing what they learn in the training to their own communities in culturally relevant ways using their own unique strengths and passions.

Dana Hewankorn, a recent graduate from the pilot training and a CSKT tribal member, opened each of her gatherings by stating: “I am not an expert. I am a grassroots person who cares deeply about my people. My intentions are to bring our people together in a safe space to learn more about MMIWG, to reclaim our traditional perspectives and our inherent courage to overcome this crisis.” Hewankorn concluded her presentations with, “Together, we will stand to empower ourselves and protect our women, girls, and people.”

Paula Castro-Stops, the mother of Henny Scott, an MMIWG victim stated: “House of the Moon is going to help keep these women and girls memories alive; Henny, Ashley (Loring Heavyrunner), Jermain (Charlo), and continue to keep their memory alive so more women will be empowered and confident in themselves.”

House of the Moon’s goal is to run another training open to 14 Indigenous women starting in August of 2021 that will last for 16 weeks and include an in-person healing destination retreat to be held in Yellowstone National Park, the ancestral lands of some 27 tribes.

To find out more, go to HOTM 2021 Training Information page.