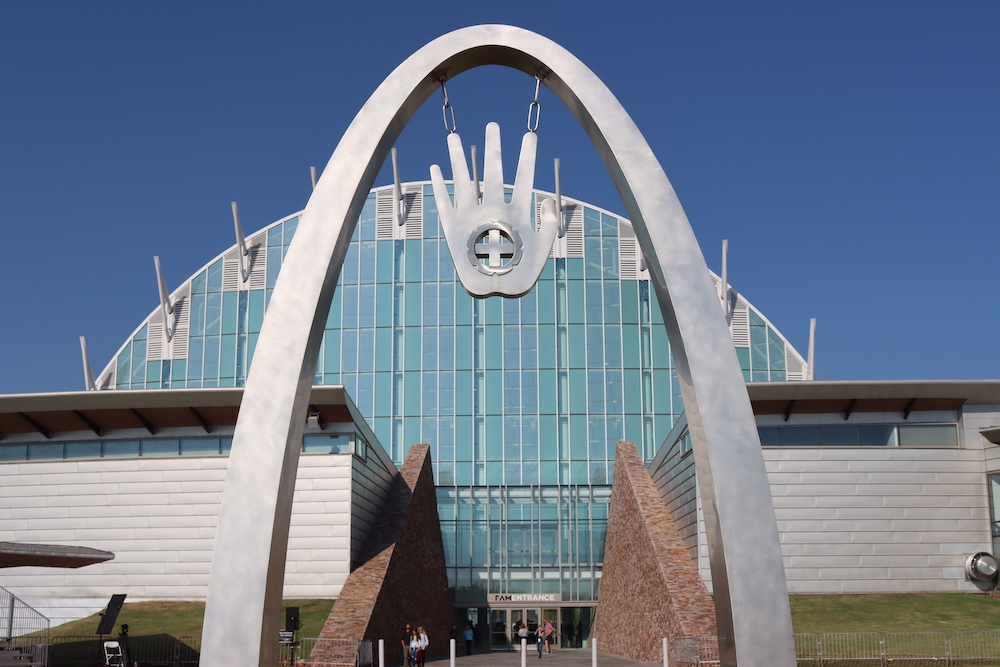 Oklahoma City, Okla.—Nearly three decades in the making, the First Americans Museum finally opens it doors this weekend, kicking off a busy weekend of activities with a procession featuring delegates from each of the 39 Tribal Nations in the state of Oklahoma.

“On Sept. 18, 2021, the First Americans Museum is set to welcome its first guests to its cultural storytelling experience steeped in history and heritage,” the First American Museum wrote in a statement. “FAM has worked with tribal volunteers and community partners to create a unique and culturally rich experience.” 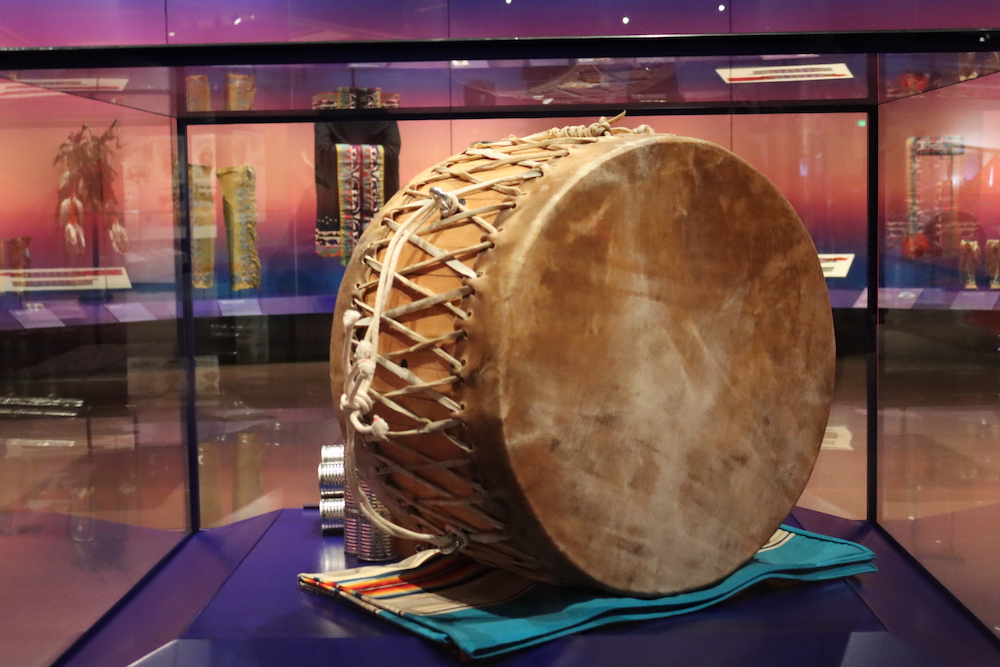 A powwow drum made exclusively for the First Americans Museum by Rock Pipestem (Otoe, Missouria, and Osage), featured in one of the museum exhibits, will be taken out of display and performed in future demonstrations and ceremonies at the museum. (Photo/Darren Thompson for Native News Online.) The museum building features the history and culture of the 39 distinct tribal nations in the state of Oklahoma. Many of the tribes in the state were forcibly relocated to the state, formerly known as Indian Territory. The state became the 46th state to enter the union in 1907, drawing its name from two Choctaw words: “Okla” and “Homma”, which means “Red People.”

The museum cost $175 million to construct, with funds coming from public and private sources. The concept was first pitched in 1994 by Oklahomans for Indian Opportunity, an organization that represented 28 tribes in the state. The tribes wanted to develop a cultural center along the Oklahoma River near where Interstate 35 and Interstate 40 connect. Stakeholders selected the site along the Oklahoma River in September 1998.

Building the museum took the better part of two decades to complete, with stops and starts along the way. Construction began in 2006, but stopped in 2012 when funding for the project ran out and the state of Oklahoma decided to stop paying for the project after a reported $90 million had already been spent on the project.  The museum and cultural center sat half-finished until 2019, when the city and the Chickasaw Nation struck a deal.

Because of rising infections of the Covid-19 delta variant, the opening is capped at 7,000 with no more than 3,500 admitted each day of the weekend.

The museum and culture center showcases state-of-the-art exhibitions in First American history, culture and art, will host live public and educational programs, provides a full-service restaurant and an express café offering unique Native-inspired cuisine, and a museum store featuring exclusive items created by premiere First American artists that can only be found at FAM. 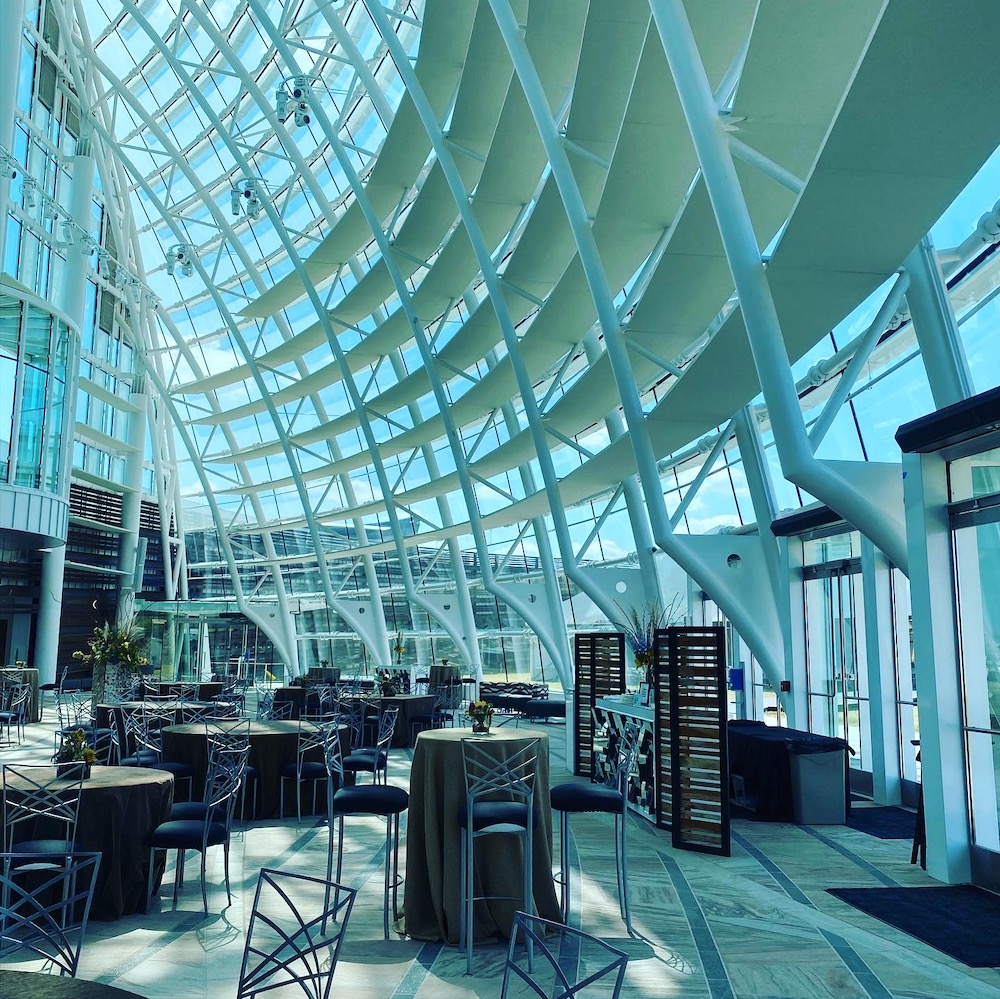 Hall of the People, a banquet center that can seat up to 900 people, is modeled after the grass lodge of the Caddo people. The Hall stands 90 feet tall and has 800 panes of inch-thick glass. (Photo/Darren Thompson for Native News Online.) FAM is managed by a 501(c)(3) nonprofit corporation, the American Indian Cultural Center Foundation (AICCF). The AICCF was initially established in 1998 to facilitate fundraising activities for the project and manage funds received through charitable gifts and grants. In August 2017, the AICCF embraced a management role for the development and operations of FAM. The Native American Cultural and Educational Authority (NACEA) is a state agency established in 1994 to develop the project.

One of the exhibits has items from each of the state’s 39 tribes from the Smithsonian’s National Museum of the American Indian. All of the items on display from the Smithsonian were welcomed and prayed for by all of their descendants, as it was the first time the items have been among their relatives and in Oklahoma in more than 100 years.

“We are thrilled to share with the public a premier venue dedicated to the history, art and cultural lifeways of First Americans in Oklahoma,” James Pepper Henry, FAM director and CEO said in a statement. “Those who attend the Grand Opening will be among the first to experience a national treasure that will be enjoyed for decades to come.”

Due to expected large crowds, opening weekend tickets must be purchased in advance. Tickets are $5 per person, per day and can be purchased online at www.famok.org.