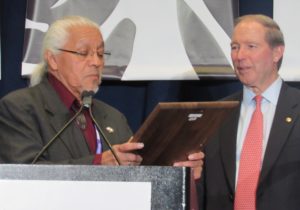 WASHINGTON — U.S. Senator Tom Udall (D-N.M.) promised to “work across the aisle to get things done for Indian Country” during his address Tuesday to the National Congress of American Indians at the 2020 Executive Council Winter Session. 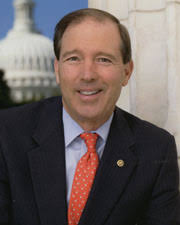 Udall, vice chairman of the Senate Committee on Indian Affairs, used his remarks to focus on his work to advance important legislative priorities for Indian Country. Udall also received a Special Recognition Award for significant lifetime achievement on behalf of Indian Country.

“Serving as vice chair of the Senate Indian Affairs Committee has been one of the greatest honors in my three decades of public service,” Udall said in a statement. “With this role has come tremendous responsibility. Since taking it on in 2017, I’ve worked hard to maintain bipartisanship on the committee.  I’d like to thank Chairman (John) Hoeven for doing the same. Native American issues are not red or blue. We must work across the aisle to get things done for Indian Country.”

— On the principles that govern the work of the Indian Affairs Committee: “In any legislation or work with Tribes I undertake, I’m guided by three core principles:  respecting Tribal sovereignty, promoting Tribal self-determination, and ensuring meaningful government-to-government consultation takes place.”

— On ensuring budgetary certainty for essential Tribal programs: “Shutdowns, sequestration, and continuing resolutions hit [Native]communities especially hard.  And, they represent a failure to uphold our federal trust and treaty responsibility. That’s why I’ve introduced legislation to move essential Indian programs to an advance appropriations cycle.  But, I need your help to educate Congress about how important this is. So, if you have meetings on the Hill or with the Administration this week, I urge you to discuss this problem and the need to take action.”

— On Supporting Native cultures and protecting cultural resources: “We must also work to preserve sacred sites and cultural landscapes – which are irreplaceable – from destruction and desecration. Unfortunately, this is ground zero for many of today’s public lands fights.”

— On revitalizing and strengthening Native languages: “In December, my bill to reauthorize the Esther Martinez Native Languages Programs was signed into law.  This program helps keep Native languages alive by providing Native communities with flexible resources to develop language tools or start immersion schools. Maintaining the vitality of Native languages is paramount.”

— On empowering Tribes to ensure public safety: “In recent years we’ve seen increases in funding for Tribal law enforcement and set-asides for Tribal initiatives to make sure Tribes get their fair share of federal dollars. But, we have unfinished business if we hope to tackle the Missing and Murdered Indigenous Women crisis head-on and close the jurisdictional loopholes in the Violence Against Women Act. So that Tribes have the tools they need to protect their communities.  Those critical issues are top of my agenda for this year.”