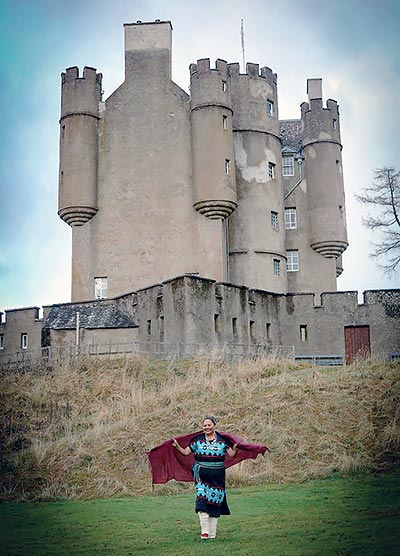 In November, Peters was the first Native American ever to give a lecture at the more than 600-year-old University of St. Andrews Scotland. The first of the three-part lecture gave a brief history of the depiction of Native Americans in film and television.

“It goes over briefly how we’re perceived and how stereotypes were created and how we can dismantle them in various works that we do,” Peters said.

The next two lectures she did were about her own work, including studies on the Indian relocation program of the 1950s through 1960s. This time in history is also the focus of her documentary “Legacy of Exiled NDNZ.”

“I saw this emergence of Native voices coming into the media and then understood the importance of us as Indian people reclaiming and recapturing our voices and the way to that is through art and multimedia,” she said.

As a young woman growing up in Shiprock, N.M., Peters recalled that she felt herself becoming depressed on the reservation. Seeing there was nothing much there for her, she decided to leave. So she flipped a coin to decide where she would end up, either New York City or Los Angeles. Sunny L.A. it was for her.

Once situated in Los Angeles, Peters said she started working and climbed the corporate ladder. But one day she was laid off, and that’s when she found herself in her early 30s starting over.

She decided to enroll at UCLA where she took American Indian studies and film and television studies. She then began taking classes at Santa Monica College in photography.

“It wasn’t instilled in me that education was important,” said Peters. “I see a lot of Navajo kids say, ‘My parents always told me school was important.’ I never had that.

“My mom told me at a young age, ‘Don’t be a bum and make sure you get a job,’” she said. “I made the conscious choice to go back to school and I started from scratch.” 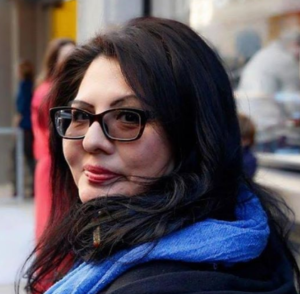 Reclaiming Native American identity and squashing the racist Hollywood stereotypes, which have been around since the beginning of the film industry, was Peters’ objective, and her education gave her the tools to do that.

As she began taking photos and working in film she began to dabble in poetry and also started writing short stories. This led to the poetry series “Waging Words.”

“What better way to change the narrative than for us to reclaim our narrative in society?” said Peters. “I started doing the poetry series, because I felt there was another platform that we weren’t being recognized in. We have very creative people that can do creative work in poetry, to understand what we have gone through as Indigenous people.”

Her efforts to give Native talent in the film industry the recognition that is often not afforded continued as she began to profile Native actors on Medium.com. Although there are Native actors who are well known and are considered celebrities, they usually don’t have profiles done on them.

“I want people to read a little about them and get to know them,” said Peters. “That has been another series I’ve started.”

While a student at UCLA, Peters befriended Sonja L. Dobroski, who is currently a Ph.D. candidate at University of St. Andrews. After about two years of planning for Peters to visit and present at St. Andrews, it finally happened with the help of her former classmate.

The invitation to present her three-part lecture series at St. Andrews had to do with Peter’s work highlighting visual sovereignty, showing students that Indigenous people use not only political but creative means to challenge reductive stereotypes, explained Dobroski.

“Having long been familiar with Pamela’s work I was keen to platform her numerous remarkable projects that seek to change these narratives and showcase the wide breadth of American Indian artists, scholars and creatives doing this important work,” said Dobroski.

Peters said from what she gathered, the students enjoyed her presentation, and Dobroski concurred that her friend’s lecture series was well received.

“The lectures were evocative and impactful in that our students were challenged to think about how they view not only Native American people but themselves,” said Dobroski. “Pamela’s work gave our students a new ground on which to understand American Indian people in terms afforded not by popular culture but by the words and work of Indigenous scholars and artists. We were very lucky to have Pamela as the first Native American lecturer in the university’s long history.”

Editor’s Note: This article was first published by the Navajo Times. Used with permission. All rights reserved.

Donate
Free Newsletter
About The Author
Author: Arlyssa BecentiEmail: This email address is being protected from spambots. You need JavaScript enabled to view it.
Breaking News