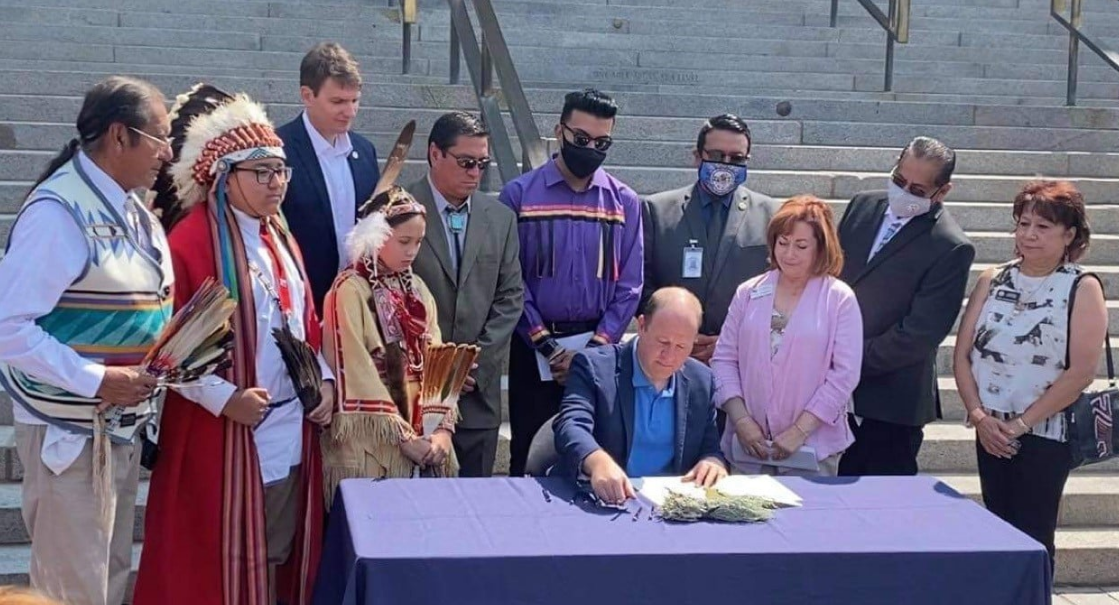 The original proclamation was signed in June 1864 by then Territorial Governor John Evans, who also served as superintendent of Indian Affairs.  Evans issued a proclamation that “intended to prevent friendly Indians from being killed through mistake… The war on hostile Indians will be continued until they are all effectually subdued."

On August 11, 1864, Evans issued another proclamation that authorized Colorado Territory citizens to “kill and destroy as many enemies of the country, wherever they may be found, all such hostile Indians.”

Those who killed Indians were given property as a reward.

The two proclamations set the stage for the Sand Creek Massacre on Nov. 29, 1864, resulting in the deaths of at least 133 Cheyenne and Arapaho women, children and elders by 700 members of the Colorado territory militia.

Polis rescinded the proclamations on Tuesday, joined on the steps of the Colorado State Capitol by citizens of the Southern Ute, Ute Mountain Ute, Cheyenne and Arapaho Tribe, and the Northern Arapaho Tribe, as well as members of Colorado's American Indian and Alaska Native communities, Lt. Gov. Dianne Primavera and other Colorado state officials.

Gov. Polis called Evans’ proclamations shameful and found it necessary to remove a gross abuse of power for a dark period of Colorado’s territorial history.

Lt. Governor and Chair of the Colorado Commission on Indian Affairs, Dianne Primavera:
"Based upon conversations with our partners in the American Indian and Alaska Native community, the Governor and I recognized the ongoing harm caused by this appalling proclamation. While the Executive Order won’t remove this stain from our state’s history, it will enable us to move forward together in making Colorado a place where all people feel welcome, safe, and have the opportunity to thrive," Lt. Gov. Primavera, who also chairs the Colorado Commission on Indian Affairs, told Native News Online in an emailed statement. "This Executive Order exemplifies what Tribal Nations, AI/AN communities, and the State can do when we come together in pursuit of a common goal. Over the last year, the State of Colorado has demonstrated its commitment to the AI/AN community and Tribal Nations.

A portion of the Executive Order reads:

“The 1864 Proclamations were never lawful because they violated established treaty rights and federal Indian law. Further, when Colorado became a state, they never became law, as they were superseded by the Colorado Constitution, United States Constitution, and Colorado criminal code. Yet, the 1864 Proclamations have never been officially rescinded. They therefore remain as a symbol of a gross abuse of executive power during that grave period in our State’s history.

For these reasons, I find it necessary to officially finally rescind the shameful 1864 Proclamations through this Executive Order and provide closure for this dark period of our territorial history.”

Colorado became the 38th state of the United States on August 1, 1876.