Chickasaw Films and Documentaries on Discount for Women's History Month 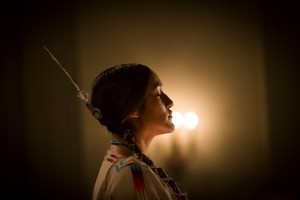 ADA, Okla. — Chickasaw Nation Productions feature films and documentaries will be discounted 20% throughout March for Women’s History Month with the promotional code WHM20.

Discounts with the promotional code can be applied to DVD and Blu-ray purchases made online at ChickasawFilms.com. The coupon code is valid for one-time use only and cannot be combined with other offers.

“Te Ata” shines a light on the remarkable life of Chickasaw storyteller Mary Thompson Fisher, who is best known by her stage name, Te Ata.

Te Ata, which means “bearer of the morning,” was a Chickasaw performer who spent the majority of her career sharing the beauty and wisdom of Native American culture with audiences around the globe.

The film is based on the life and legacy of Te Ata and shares her story of breaking cultural barriers and changing public perception during her storied career, which spanned from the 1920s until her death in 1995.

After its theatrical release, critics praised the film’s message of resilience, perseverance and determination.

“You could say that Te Ata is one of many ‘Hidden Figures’ in the Native American culture,” said Anita Busch, film editor for “Deadline.”

In addition to the feature film, Chickasaw Nation Productions offers the documentary “Bearer of the Morning – The Life of Te Ata Thompson Fisher.”

Set in 1920s rural Oklahoma, the feature film “Pearl” is based on the remarkable true story of Chickasaw aviatrix, Pearl Carter Scott – the youngest licensed pilot in American history. Mentored by world-renowned aviator Wiley Post, Pearl first pilots a plane at the age of 12 and becomes a commercial pilot and local celebrity before she reaches adulthood. As she finds love and becomes a wife and mother, her two greatest passions collide.

The film was named the best overall film and the best Native American film at the 2010 Trail Dance Film Festival. The film was also named a Heartland Film Festival official selection. The production is one of only 13 feature films chosen for the distinction out of more than 600 submissions to Heartland, which is well known as one of the largest family oriented film festivals in the world.

"Pearl" also won a prestigious "Best of Show" award from The Indie Fest, and swept the feature docudrama category at the International Cherokee Film Festival.

The Dove Foundation awarded "Pearl" four "doves," giving the film its "family-approved" seal for all ages.

Pearl’s story is presented in documentary form with Chickasaw Nation Productions’ “Pearl Carter Scott: On Top of the World.”

“First Encounter” explores the actions taken by Chickasaws in 1540 during their first contact with Europeans. The documentary highlights the encounters, struggles and perseverance of the Chickasaw people throughout Spanish explorer Hernando de Soto’s attempted conquest. It was the first European contact for the Chickasaw and established the reputation for which the tribe would be recognized for centuries and still remains today – “unconquered and unconquerable.”