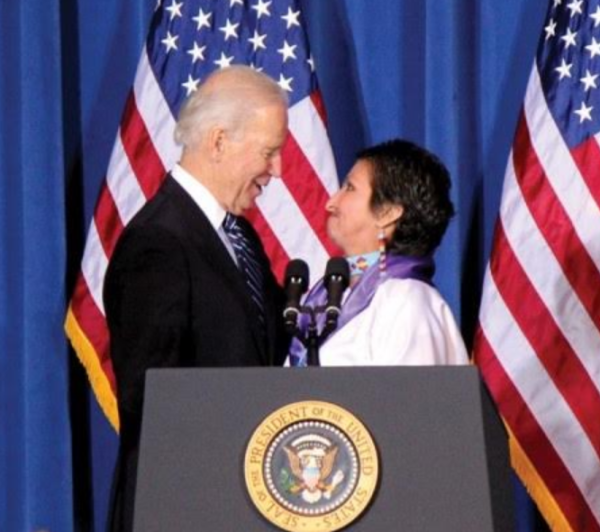 LAS VEGAS – Coming out of Wednesday’s Democratic debate at the Paris resort on the Las Vegas Strip, Senator Bernie Sanders remains the odds-on favorite in the gambling capital to win Nevada on Caucus Day. Sanders is forecast to carry the Native reservations and colonies in the state as his popularity in Indian Country is undimmed. However, some tribal leaders have started to question Sanders’ lack of policy specifics on the Murdered and Missing Indigenous Women (MMIW) human rights tragedy.

By contrast, the Global Indigenous Council announced its endorsement of Joe Biden for President in the wake of the debate. The Global Indigenous Council is among the organizations at the forefront of attempting to secure meaningful federal legislation to address the Murdered and Missing Indigenous Women and Girls crisis, and also initiated the first national MMIWG billboard campaign and organized the US’s only MMIW Tribunal to date (www.mmiw-gic.com).

Senator Sanders was the only Democratic Presidential candidate who did not either send a surrogate or submit a statement that was read into the record at the MMIW Tribunal which was hosted by the Blackfeet Nation.

“Of all the immense challenges facing Indian Country, none is more urgent than the Murdered and Missing Indigenous Women and Girls (MMIWG) epidemic that is devastating Indigenous communities across the country. Vice President Joe Biden has recognized that this human rights crisis is a foundational issue that must be addressed not by soundbites but by fully funded effective action. Vice President Biden created a legislative legacy on women’s issues in the US Senate, a commitment he clearly intends to continue as President of the United States,” stated Tom Rodgers, President of the Global Indigenous Council.

“Vice President Biden was the only 2020 Presidential Candidate to send a senior campaign surrogate, Ambassador Cathy Russell, to the first-ever MMIW Tribunal held in the US that was organized by the Global Indigenous Council and hosted by the Blackfeet Nation. The Vice President followed that with a strong written commitment to address the MMIW crisis that he submitted to the Four Directions and Nevada Tribal Nations 2020 Native American Presidential Forum held in Las Vegas last month,” Rodgers continued.

Rodgers was no stranger to the Obama Administration. Jim Messina, a Deputy Chief of Staff to President Obama and his 2012 Presidential National Campaign Director, described the GIC President as “the best and foremost Native American advocate, strategist and lobbyist.”

Thirty-two Indian Reservations and Colonies stretch across Nevada and the Global Indigenous Council has received reports that “thousands of Indigenous women are missing” in Nevada, with many feared murdered. Activists on the frontlines in tribal communities believe that resolution for these Nevada families will remain distant without new federal laws to specifically address the tragedy. The Four Directions and Nevada Tribal Nations Native American Presidential Forum hosted the world premiere of the MMIW documentary Somebody’s Daughter, the trailer for which has since trended on YouTube.

The Vice Chair of the Biden campaign, Ambassador Catherine M. Russell, who served as Ambassador-At-Large for Global Women’s Issues in the Obama Administration, is interviewed in Somebody’s Daughter. The film, directed by Rain, has received stellar reviews and support from an impressive array of Indian Country luminaries, including the Poet Laureate of the United States, Joy Harjo, Oscar-winner Wes Studi, author and activist Winona LaDuke, and independent 2020 presidential candidate Mark Charles.

“The film is about the MMIW, MMIP emergency, not the 2020 presidential campaign,” emphasized Rain. The director acknowledged the support the film has received from Mayor Pete Buttigieg, Tom Steyer and the Biden campaign. He said that he has not had the opportunity to speak with Senator Sanders about the “human rights crisis that is MMIW” but that he had previously worked with Senator Sanders on other issues. 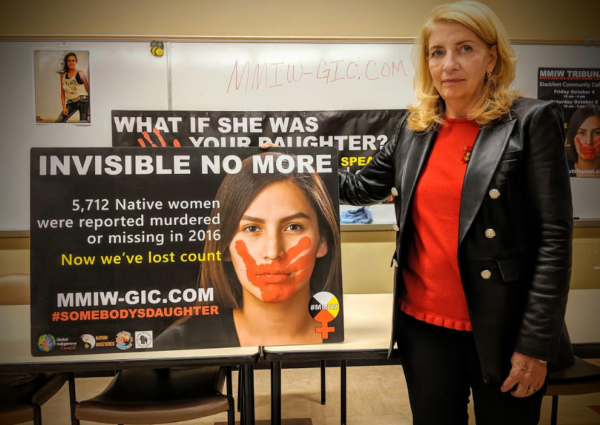 In Somebody’s Daughter, Sanders insists from the stage of the Four Directions Native American Presidential Forum in Iowa that Indian Country Policy should be made in Indian Country, not Washington, D.C.

“Somebody's Daughter is not entertainment. It has been supported by the likes of Congressman John Lewis, Native American Rights Fund (NARF) Founder John Echohawk, and the National Indigenous Women's Resource Center. This is life-saving work, moving our nation’s leaders beyond words to actions and commitments that would halt this human rights crisis. Vice President Biden has stated, ‘The epidemic of violence against indigenous women and girls is a stain on our past and present. But it does not have to be our future.’ Somebody’s Daughter is ensuring that it won’t be our future as it increases national awareness and focuses the attention of lawmakers on the issue,” said Chairman David Sickey of the Sovereign Nation of the Coushatta Tribe of Louisiana, the executive producers of the film (www.somebodysdaughter-mmiw.com).

The Sovereign Nation of the Coushatta Tribe was the lead sponsor for both 2020 Native American Presidential Forums in Iowa and Nevada.

In an 8-page policy statement, Biden has committed to taking a “comprehensive approach” to the MMIWG crisis, “one that closes the data gap, increases funding and supports tribes in building their own programs, expands tribal authority, grows coordination among law enforcement agencies and provides additional resources to tribal enforcement, and expands access to culturally sensitive resources for victims and survivors,” all recommendations tribal leaders make in Somebody’s Daughter that have been advanced by the Global Indigenous Council.

In Wednesday’s debate, Senator Sanders sought to distant himself from the aggressive social media antics of a segment of his “Bernie Bros,” contending that “99%” of his Twitter followers “are decent human beings.” Speaking on the condition of anonymity, a source working to get tribal members to caucus sites said the Bernie Bros’ tactics had intimidated some tribal leaders in Nevada, resulting in them withholding endorsements for other candidates. Sanders implied that Russian trolls might be responsible for the “ugly remarks.”

During the 2019 Comanche Nation Fair in Oklahoma, Senator Sanders met with victims’ families and grassroots organizations working to address the MMIP crisis in the state. If elected President, he committed to appoint an Attorney General dedicated to working with Indian Country at every level to counter the escalating situation. “Empowering Tribal Nations” is 29th on Senator Sanders list of policy priorities on his campaign website. MMIW is not mentioned, only the widespread consensus position to, “reauthorize and expand the Violence Against Women Act to provide critical resources to women in Indian country and allow all tribes to prosecute non-Native criminals.”

“Let’s remember, it was then Senator Biden who wrote the Violence Against Women Act in 1990, and then in 2013 as Vice President, he fought for the 2013 VAWA reauthorization which recognized tribes’ inherent sovereign power to exercise criminal jurisdiction over non-Indian offenders who commit domestic violence, date rape, or violate protection orders,” explained Lynnette Grey Bull, Vice President of the Global Indigenous Council. In Indian Country we desperately need the 2019 reauthorization of the Violence Against Women Act to be advanced, passed and signed into law. Vice President Biden ensured us, in writing, that this was one of his top legislative priorities,” Grey Bull concluded.