The Native Youth Olympics Event in Bethel is a Display of Strength, Agility, and Heritage 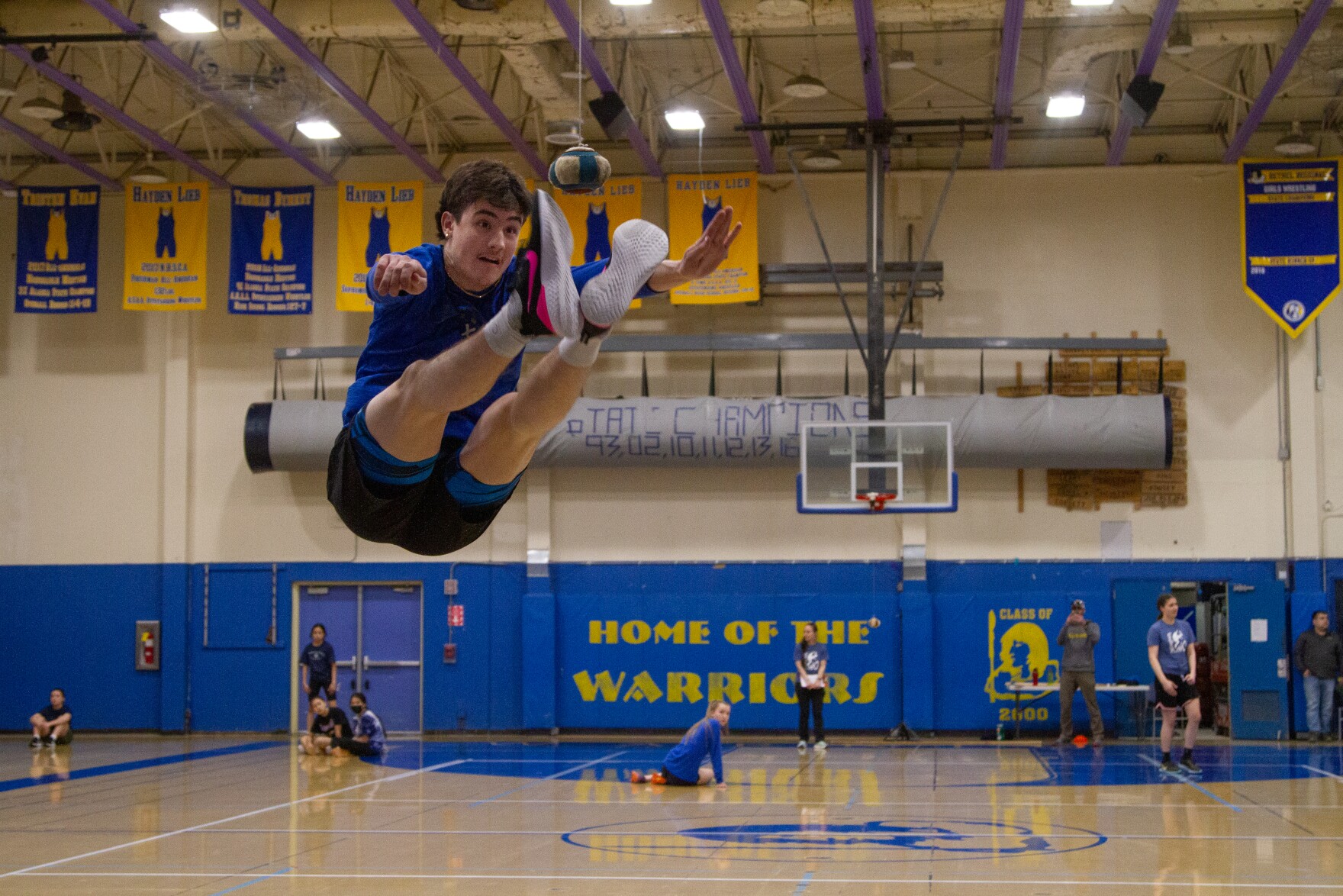 The gym at Bethel Regional High School is as quiet as it can get. All eyes in the bleachers are on the court. Eighth grader Dawnielle Patterson is starting her pre-one-foot high kick ritual. She has already won the category in the Native Youth Olympics, but if she gets this kick she stands to beat her own personal record by 4 inches.

Patterson stands in front of the seal- and caribou-skin ball hanging by a string from a wooden post. She looks intently at the ball, then kicks her leg high and straight at it while pointing her toe like a ballerina or a karate master. This is practice. She takes three large steps backwards to the starting line.

“Then I rock back and forth,” says Patterson, shaking her hands at her side. “It calms me down,” she explains.

Then she starts her approach.

“I try to run really fast, and then try to do a slight jump stop so I can have my momentum to kick,” said Patterson.

The crowd applauds. Her process must have worked.

“I can’t stop shaking after kicking 70 [inches]. I actually can’t believe it that I made my own record at home,” said Patterson.

Patterson has just won the one-foot kick event with a personal record. The one-foot high kick is said to be a test of a hunter’s strength and agility.

The one-foot high kick wasn’t the only competition this weekend. Students from Bethel Regional High School, Gladys Jung and Ayaprun Elitnaurvik elementary schools, and from Dillingham schools gathered to compete in 10 different Native Youth Olympics events over April 8 and 9.

Bethel Regional High School Athletic Director Darren Lieb said that the games have a special significance that tie the students to their heritage.

“Every one of these games have a meaning behind them. These games kind of translated from inside a living room or inside a sod hut in the winter in the early days. Not only just to keep them busy and sane, but to keep them in shape,” said Lieb.

Lieb said that these games would prepare people for the spring hunts.

“Having the opportunity to teach them the events and the meanings behind them, it's really nice,” said Charles.

Charles is from Toksook Bay. He was a state champion in the kneel jump in 2017. Kneel jump is where you sit on your knees and then spring in the air, jumping as far forward as you can. Now he teaches that and other events to kids in Bethel, and loves telling them about the particular uses in Toksook Bay.

“Growing up, I was told that our ancestors used to kayak with their knees on the base of the kayak. And then they just kneel jump out of the kayak. Either that or jumping from an ice floe to another,” said Charles.

Charles and Lieb stress that these are just games. And lots of the kids that were interviewed said that’s what they love about the Native Youth Olympics. It takes some of the pressure off.

“Well, it's like we're competing, but it's all in a friendly way. There's really no ego involved. Everybody supports each other, and that's the fun part about it,” said senior Peter Crow.

It’s easy enough for him to say. He was the winningest high school boys athlete of the weekend. He won three of the 10 events, and placed third in two. The organizer of the event, coach Tommy Bayayok, said that he used this event to decide which high schoolers to take to state. And Crow sure looks competitive. Lieb is pretty sure Crow’s one-foot high kick of 103 inches is tied for first in state this year with a boy from Nome. Plus, Lieb said, the floors they’ll compete on in Anchorage are wooden. That means they’re springier than Bethel’s composite floors and should give Crow a little extra height in his jump.

Some students have one more event to look forward to. The state competition will take place on April 20 in Anchorage. But this Native Youth Olympics competition in Bethel was the last chance for parents to see their kids compete in any sporting event locally this school year.