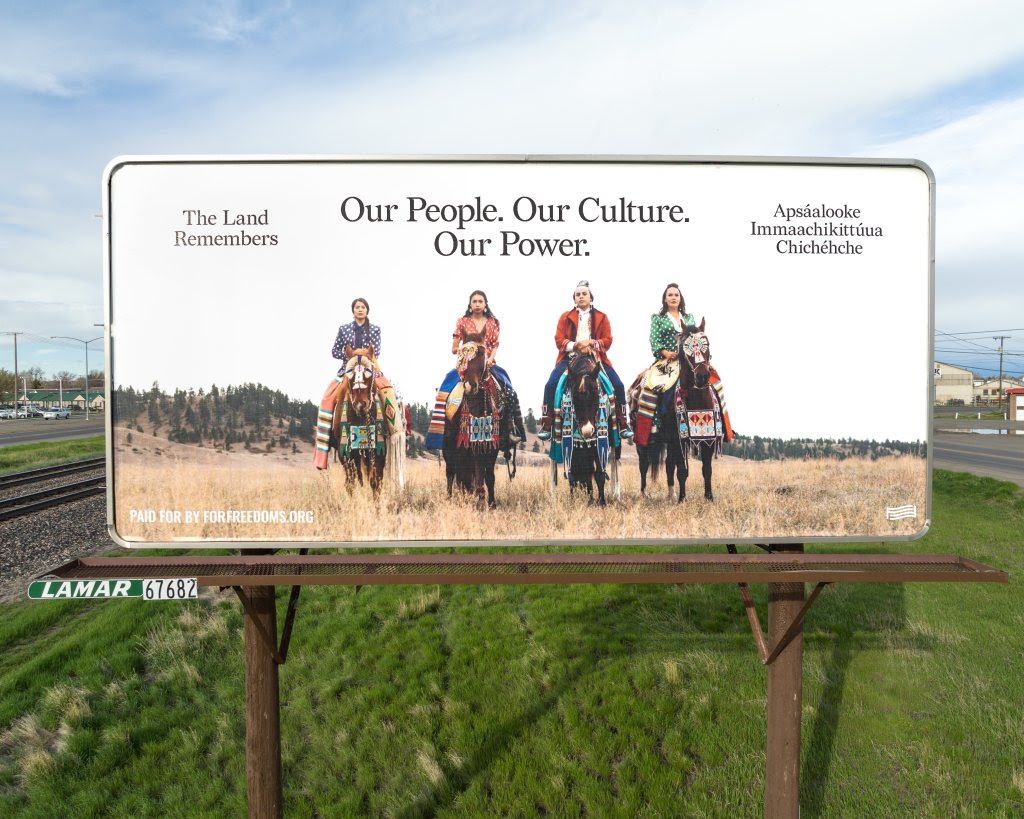 Apsáalooke artists join forces for a national project that asks: ‘What does justice look like to you?’

BILLINGS, Mont.—Sandwiched on a strip of prairie between Monad and Laurel roads, a billboard in Billings celebrating the Apsáalooke nation proclaims, “The Land Remembers.”

One of a series of 53 billboards that went up earlier this month across the U.S., the artwork on display is part of a campaign titled “Another Justice: By Any Medium Necessary” and launched by For Freedoms, a national organization advocating for artists and art installations in public spaces.

[This story was originally published by the Montana Free Press on May 20, 2022. Republished by Native News Online with permission.]

Participating artists and activists were asked, “What does justice mean to you?”

For Nina Sanders, the answer was “Apsáalooke Immaachikittúua Chichéhche. The Land Remembers.”

“It ties in to our people, our culture and our power,” explained Sanders, who joined with fellow Apsáalooke members JoRee LaFrance and Bethany Yellowtail to create the billboard. “In three parts, we are reminding people that your land, your culture and your people are your power.”

Claudia Peña is the executive director of For Freedoms, a national artist-led social justice organization founded in 2016 that uses billboards to start conversations.

Peña described the campaign as a way to promote more nuanced conversations about social justice. For Freedoms involved people with different experiences and connections to justice in the billboard project, including people who are currently or formerly incarcerated, victims of crime and their next of kin, law enforcement, public defenders, abolitionists … “almost every perspective you can have — especially on the criminal justice perspective — are included on this campaign,” Peña said.

The Billings billboard presents an image of four Apsáalooke people, including Sanders and LaFrance, as well as KamiJo Whiteclay and Rusty LaFrance, on horseback. They are adorned in beaded regalia and contemporary fashion designs created by Yellowtail, a Los Angeles-based fashion designer with heritage stemming from the Northern Cheyenne and Crow tribes.

“It was something that we created out of the love of our community and from the center of our universe — Crow Country,” said Yellowtail, who grew up on the land where the photograph was taken, in the Mighty Few District in Wyola, Montana. “It’s in the fields that raised me,” she said. “It’s my backyard.”

There’s power and pride in the resulting image, which originated from a series of photos shot in October 2019 by Erica Elan Ciganek, who is based in Long Beach, California. The images represent years of work preparing to debut a collection of Indigenous-designed fashions in Chicago as part of the “Apsáalooke Women and Warriors” exhibit, which opened in March 2020 at the Field Museum.

“I am a visual person, so the way I express myself is through art and fashion and textiles,” Yellowtail said. “I can create the things I want to say without saying them.”

For the words included on the billboard, Yellowtail relied on Sanders and LaFrance.

“‘Immaachikittúua’ is to show respect for all things,” said LaFrance, a Dartmouth graduate working on her PhD in the Department of Environmental Sciences at the University of Arizona. “From our perspective, that means taking care of the mountains, the water — all beings that are there, and taking care of each other, our families, and to show respect for one another.”

Sanders, who lives in Chicago and works as a curator and consultant, began studying Immaachikittúua when curating the exhibit at the Field Museum. It’s a word she’s heard her whole life in connection with the spiritual ecology of the Apsáalooke people. In the catalog of the “Women and Warriors” exhibition, Sanders shared the story of Iichiikbaaliia, the First Maker of the Crow people. “Iichiikbaaliia instructed people to live in a way that is considerate of all living things and told them it was their responsibility to care for Earth and her creatures, and to honor the many gifts they were given.” The way of being is described as “Immaachikittúua.”

“Our bodies are made of the land that we walk on,” Sanders said, “and when we go back to the Earth, all those memories and those things are taken, and it becomes part of the cycle. Your ancestors are the land. You are the land.” 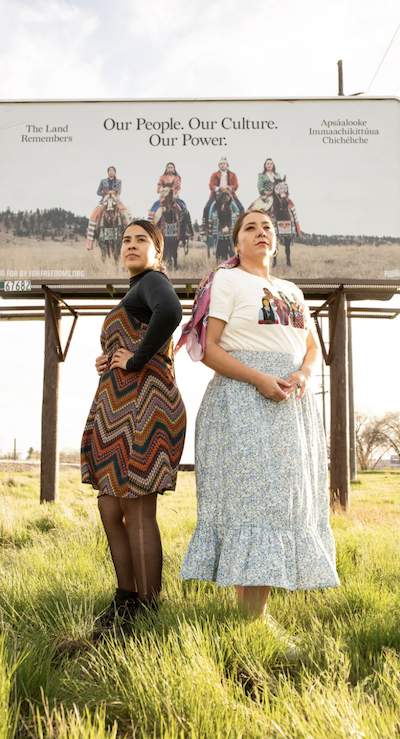 JoRee LaFrance (left) and Bethany Yellowtail pose in front of a billboard erected in west Billings as part of a national initiative by For Freedoms titled “Another Justice: By Any Medium Necessary.” Credit: Robyn IronThe Apsáalooke Women and Warriors’ exhibition, which travels to Bozeman this month, is the largest exhibition of Apsáalooke culture and objects curated by Native people. The exhibition includes contemporary Apsáalooke art and fashion paired with historic objects drawn from the Field Museum’s archives. Sacred war shields and medicine bundles that once belonged to Crow families are on display alongside modern works, all curated by Sanders in collaboration with tribal members. The exhibition opens May 28 at the Museum of the Rockies and will be on display through the end of the year.

Yellowtail has been working on social justice issues from L.A. for several years. “I am many times the only Native woman in the room, and give that grounding and perspective to remind them of the ways that we are thinking about justice and Indigenous people in general,” she said. “I feel very fortunate that I get to come in with the worldview from Apsáalooke Country. … Seeing this billboard, it feels like everything is coming full circle.”

All three women grew up on the Crow Reservation but now live elsewhere and travel back to Montana for various projects. Upon learning that the billboard would be placed in Billings, the collaborators knew they would be talking directly to fellow Apsáalooke members.

“The most important audience for us is our own people. It is for us,” Yellowtail said.

Anna Paige is a Montana-based arts journalist and co-host of "Resounds: Arts and Culture on the High Plains" on Yellowstone Public Radio. She's worked in the newspaper and publishing industry since 2004, most recently for the Billings Gazette as an arts and entertainment journalist. She is also the co-founder of Young Poets, a nonprofit teaching poetry in regional elementary schools, and winner of the 2021 Library of Congress Award for Literacy.