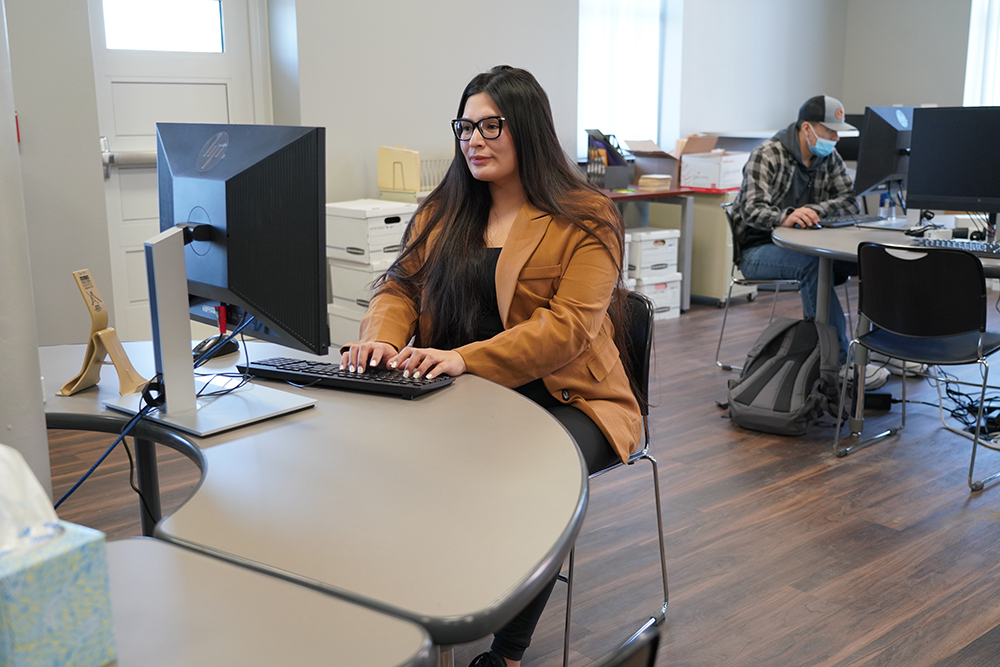 According to Partnership with Native Americans, students in Indian Country face significant financial and geographic barriers to accessing higher education; just 17% of Indigenous Youth are able to continue their education beyond high school.

"If you are a first-generation student or a student with financial needs, you can come here and complete your education without any debt," Brent Kleinjan, UTTC Community Relations Director, said.

There are more than 30 fully accredited Tribal Colleges and Universities (TCUs) in the United States. While all TCUs offer associate degree programs, UTTC stands out in offering bachelor's degree programs.

I was able to stress less about paying for my higher education. I didn't have to worry about taking out big loans or stress about how I could afford going to college. It gave me a piece of mind that I could afford this and even benefit from the Native American tuition Waiver Program while being a mother, wife, and full time student.

The Native American Tuition Waiver has helped me tremendously in my experience at UTTC. It helped me by covering tuition costs which led to me receiving more financial help from my Financial Aid assistance. It helped by cutting my costs of school which allowed me to put that money towards transportation to campus.

The waiver has helped me, not only financially, but mentally, as well. The cost to tuition is taken care of and I can focus on my family and my studies. I am grateful for the waiver which eases my financial burdens on my path to a career after UTTC.

It paid for my schooling so I was able to experience opportunities such as joining clubs or organizations. It allowed me to not worry about the financial part of college and helped me focus more on my schoolwork so I was able to succeed greatly and achieve good grades.

While many TCUs are on reservations, UTTC is located in Bismarck, offering students access to the city's amenities and the job market.

"If you are from a reservation, you can come here, feel like you are at home, but then also enjoy the city of Bismark," Kleinjan commented. "There are lots of things to do and a ton of jobs if you want to work while going to school."

The college also hosts the UTTC International Powwow every year on the second week of September. The gathering is one of the last large outdoor events on the northern Great Plains powwow circuit and raises money for student scholarships.

UTTC hopes the Native Tuition Waiver program will expand access to higher education among Indigenous students and increase graduation rates. Currently, 65% of its student body are first-generation students; 68% are low-income. Graduation rates for first-time Native American college students in the United States hover around 41% compared to 62% for the general population.

Lisa J. Azure, PhD is the Vice President of Academic Affairs at UTTC speaks to the board’s decision to officially adopt the Native American Tuition Waiver.

“The decision to cease participation in student loans and move to the Native American Tuition Waiver (NATW) in an effort to decrease student debt was strongly supported by the UTTC Board of Directors in the Spring 2016,” Azure said. “ Initially, a pilot project, the Board institutionalized the initiative three years later as data indicated overall higher student enrollments and less student debt as well as higher grade point averages and completion rates for those receiving the tuition waiver.  We need to recognize these are students from some of the most impoverished areas in the country and it’s our obligation to offer realistic financial assistance to help them get started on a path that will change their lives.”

For more information on UTTC and the Native American Tuition Wavier, visit https://uttc.edu.