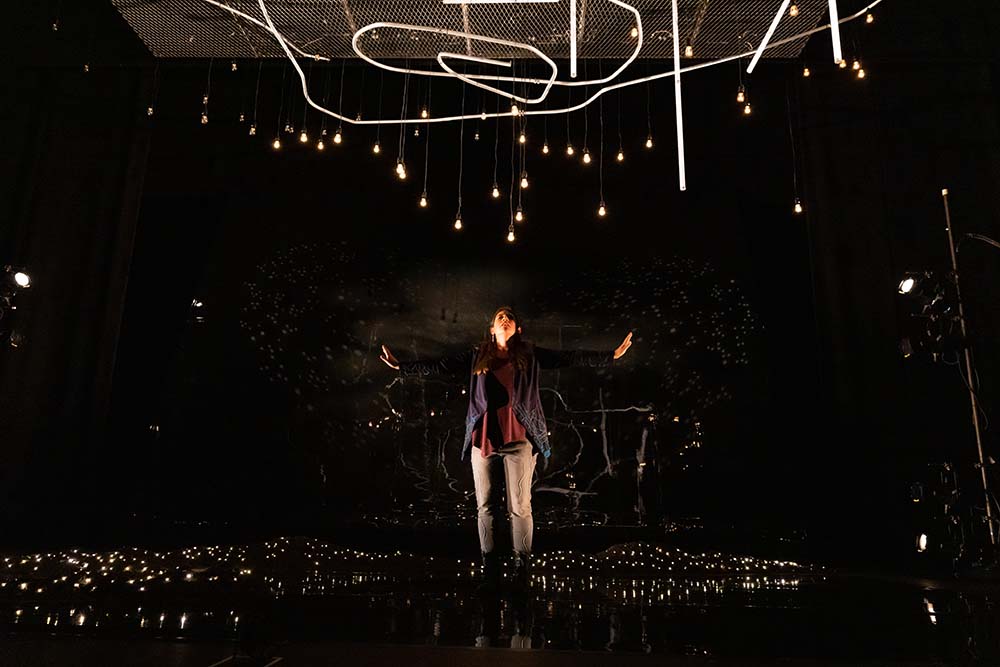 “I’ve been trying to remember a story, can you help me? A long time ago our ancestors told it to us. I think it has to do with where we belong.”

Mohegan theatre-maker Madeline Sayet asks this, toward the end of her solo piece, WHERE WE BELONG. Sayet has been sharing her play across the continent, with performances previously in Philadelphia, Chicago, and Seattle before making its New York City premiere at The Public Theater from October 28 to November 27. Complimentary tickets are available for Native and Indigenous peoples.

The play centers on themes of language, and how Sayet is forced to find herself in Shakespeare due to the active erasure of her own Mohegan language.

After growing up involved in theater, in 2015, Sayet moved to England to pursue a PhD in Shakespeare. However, once there, she quickly found herself grappling with the question of what it means to “remain or leave” as the Brexit vote threatens to further disengage the UK from the wider world. Moving between the United States and the United Kingdom — nations that have failed to reckon with their ongoing roles in colonialism, she finds clarity in the journeys of her Mohegan ancestors who had to cross the ocean in the 1700s on diplomatic efforts for her people. The more she crosses the ocean and spends time in the sky, Sayet finds herself transforming more and more into a blackbird.

“This is only one Mohegan story, only my story, and only a part of my story: a small and finite thing in the spectrum of our world,” says Sayet in her note in the show’s program. While the play deals with history and has heartbreaking moments, it is also a funny and personal story, filled with wry humor about family and colonialism.

“In Mohegan culture, we have a symbol, the Trail of Life, that depicts the ups and downs of life, and the people you meet along the way. This symbol is embedded in much of the design of WHERE WE BELONG because I embrace this trail as a journey each night as I learn different things about myself, my ancestors, and the world around me. I hope that audiences will dig into the questions that come up for me on this journey, and how those questions may relate to the audience’s own life.”

WHERE WE BELONG was never meant to be a play. Sayet wrote it to figure out the lines drawn between people and to piece herself back together. “This journey continues and keeps evolving, as the world continues to move—like the river, the sky, the earth—holding stories that came before and those of this moment, which is ever changing.”

The show has an accountability rider that travels with it to make sure that the theaters are building relationships with the Native nations and communities whose lands they occupy. As part of the rider, there will be additional programming such as a discussion about language revitalization and an event with local Native writers as well as an Indigenous Community Performance with talkback, which is scheduled for Sunday, November 6 at 2pm.

The show is performing at The Public Theater in New York City. A theater on Lenape Land, in Manahatta. A place in which Native voices have not been properly honored onstage but have been actively erased on Broadway and Off-Broadway stages. This play written and performed by a Northeastern Native woman on a New York stage, marks a momentous change.

This intimate and exhilarating solo piece is directed by Mei Ann Teo and produced with Woolly Mammoth Theatre Company in association with Folger Shakespeare Library. The Public Theater is located at 425 Lafayette St, New York, NY. Access tickets and more information at publictheater.org/wwb.