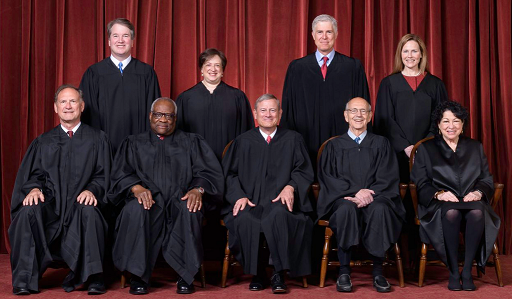 Guest Opinion. The United States Supreme Court’s history and jurisprudence is rooted in a colonial violence, Indigenous land dispossession, genocide, and slavery, but we are still surprised when, in 2022, it determines a woman no longer has a Constitutional right to bodily autonomy. Why? I turned this question inward and now share my thoughts as an Indigenous woman, as a lawyer in the field of federal Indian law, and as someone who has an interest in seeing this country turn from its violent colonial origins toward mutually beneficial governance practices rooted in trust.

This past week I participated in “Native Peoples, American Colonialism, and the U.S. Constitution” an interdisciplinary workshop in constitutional studies at Yale hosted by the NYU-Yale American Indian Sovereignty Project. Law, political science, and history scholars reviewed and discussed scholarship on Indigenous Peoples, the United States Constitution, and its colonial and diplomatic origins. Our aim was to begin to decolonize our respective fields by illuminating Indigenous participation in, and impact on, the development of constitutional law, history, and theory. As a general principle the first step of decolonization requires eliminating the erasure of Indigenous Peoples, and other “subordinated” communities, from the scholarly landscape. Decolonization is about widening the path to knowledge by incorporating, and recognizing as valid, Indigenous knowledges, languages, histories, and institutions. In constitutional studies the scholarship has largely centered on the Revolutionary War, the Continental Congress, Hamilton, Madison, and the Reconstruction Era. However, over the last decade or so, scholars have begun to address the role Native Nations played in this history with an emphasis on what role the U.S. Constitution plays in shaping the federal and state governments interactions with Native Nations going forward.

In examining this history one can’t ignore the colonial origins of the country, and the violent federal and state-sanctioned “removal” of Indigenous peoples from their homelands in service of the settler-colonial project. The Supreme Court has often been heavily involved in this colonial violence. But despite the imagery we might conjure up about U.S. history during this time, at spaces and places between 1492 and 1871 (when treatymaking formally ended), was an era of diplomacy by and between early colonists and Native Nations. This era had moments of multicultural jurisgenesis where mutually beneficial arrangements were codified in the sacred  text of treaties. Still yet, this early federal government vacillated between being an eager diplomat in treatymaking and wielding imperial violence in its legislatures and judiciaries. In jurisprudence defining this  early relationship between Native Nations and the federal government the Supreme Court recognized it had a trust responsibility to Native Nations stemming from these early diplomatic relationships, and the changing circumstances of increased  U.S. strength and power. (See Cherokee Nation v. Georgia (1831)). The Court also created the doctrine of federal plenary power over Indian affairs which it viewed as necessary in 1832 to protect Tribes from the state of Georgia. Indeed Native Nations have historically and contemporarily sought federal protection from state persecution by invoking the trust responsibility and even plenary power.  Unfortunately, the federal government often breached this responsibility by breaking its promises, cancelling treaties, and fraudulently ceding Indigenous lands under this self dealt doctrine of power which is not enumerated in the Constitution. (See e.g. Lone Wolf v. Hitchcock (1903)). NYU Law Professor Maggie Blackhawk, one of the workshop hosts,  might call these types of self dealing cases “common law colonialism” as they illustrate both the dangers of an unrestrained federal power, and dangers of states encroaching on our autonomy and freedom. This power struggle is often what interpreting the Constitution is centered around. In federal Indian law, the unyielding advocacy of Indigenous leaders, scholars, organizations, and Tribal governments lobbying for Native Nation sovereignty and power has worked to combat the colonialism of unrestrained federal power and unregulated states.

In McGirt v. Oklahoma, Herrera v. Wyoming, and Washington State v. Cougar Den the Court returned, after a long hiatus, to recognizing treaties with Native Nations as the supreme law of the land–a power explicitly provided for in the Constitution. For a Court with several justices considered to be textualists, this recognition may not be surprising. Constitutional scholars search to find meaning in the document by focusing on the explicit terms contained therein, seeking to understand the original intent of the framers, positioning rights in the context of historical practice, and, of course, prior case law. Figuring out how the Court will interpret the Constitution without such explicit text– for example when it makes an argument for plenary power over Indian affairs or questions the trust responsibility–is harder as these doctrines are not enumerated in the Constitution.

This unenumerated rights problem emboldened the Supreme Court to turn to extratextual factors to overturn a woman’s right to bodily autonomy in Roe v. Wade and Planned Parenthood of Southeastern Pa. v. Casey.  The case, Dobbs v. Jackson Women’s Health Org., signifies that the colonial Supreme Court is back in no uncertain terms. Dobbs reads like a case from the 1800s when the Court found itself searching to rationalize its imperialistic endeavors by citing laws and practices that fly in the face of modern day human rights. (See Johnson v. M’Intosh (1823); Dred Scott v. Sanford (1857); Plessy v. Ferguson (1896)) The Court opines that “liberty” shouldn’t be construed to include a woman’s right to choose, and because that right is neither explicitly enumerated in the Constitution, nor rooted in the Nation’s history, the Court has no choice but allow states to regulate abortion. The opinion places an inordinate amount of focus on legal history in the period between the 1600-1800s. The colonial elephant in the opinion is that during the 1600-1800s legal institutions only granted sovereignty to white property owning men. If we are looking to this colonial Supreme Court to defend any of our rights not explicitly enumerated in the Constitution, and its answer is to look to the legal institutions of the 1600-1800s for what is “deeply rooted in this Nation’s history and tradition” we are in a world of danger. (Dobbs at 5).

In reimagining the Constitution this past week, for the first time, I found hope in the words “We the People.” The small cohort of scholars was discussing the Constitution’s foundations in the settler-colonial project, why it is important to name it, and how doing so might shape a more liberatory future. We were no longer ignoring the colonial elephant in the room that has served as an intellectual wedge between my Indigenous identity and U.S. citizenship. It was powerful, and an important paradigmatic moment for me as an early law scholar. The fact of the matter is, the Constitution is a colonial document and until we decide to amend, rescind, or work around it, textualists will reign supreme and our unenumerated rights can be stripped away state by state. This past week the cohort discussed what it might look like to shift from a rights based framework to a structure based framework that would be less reliant on the Supreme Court’s rights limiting colonial jurisprudence.

What might it look like if we all engaged in collaborative and restorative law making, if we cited Indigenous worldviews and laws instead of the colonial era, if the federal trust responsibility applied to all U.S. citizens? If we decolonize the law? We may very well have to lean into our inherent power and sovereignty and leave the Supreme Court to its colonial endeavors and remove our trust from the institution if it refuses to evolve along with the rest of us. In the meantime I hope we can see the value of decolonizing our institutions and look to new ways of knowing and worldviews that center on reciprocity and good governance.

Enaa Baasee‘ (Many Thanks) for taking a moment to read, lead, and share.

Nazune Menka (Koyukon Athabascan/Lumbee) is an attorney currently serving as a Supervising Attorney at the Environmental Law Clinic at Berkeley Law and previously served as the Berkeley Law Tribal Cultural Resources Policy Fellow from September 2020 to June 2022. Additionally, Menka is an attorney at Rosette, LLP, She can be reached at [email protected] or on Twitter @NazuneJD.

Donate
Free Newsletter
About The Author
Author: Nazune MenkaEmail: This email address is being protected from spambots. You need JavaScript enabled to view it.