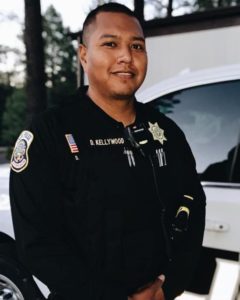 FORT APACHE INDIAN RESERVATION — Tragedy struck the Fort Apache Indian Reservation in the early hours Monday morning when a White Mountain Apache police officer was killed while responding to a domestic dispute call after shots were fired near the Hon-Dah Casino and Conference Center in Pinetop, Ariz.

Officer David Kellywood, 26, one of the youngest officers on the White Mountain Apache Police Department, responded to the call just before 1 a.m. Monday morning between the casino and the Hon-Dah RV Park on State Route 73.  Kellywood was the first officer on the scene of the incident.

According to a press release issued Monday by the Navajo County Sheriff’s Office on behalf of the tribal police and the White Mountain Apache Tribe, the first officer on the scene located the man who fit the description of the individual involved and "the subject immediately engaged in a violent physical altercation with the officer during which the officer was shot.”

A second responding officer shot the suspect. Both Officer Kellywood and the unnamed suspect were taken to Summit Healthcare Regional Medical Center six miles away in Show Low, Ariz. for treatment. Both died from their gunshot injuries. 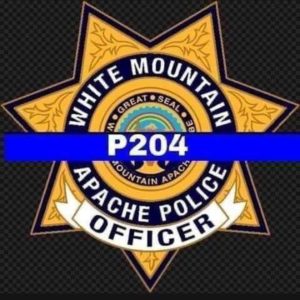 The Navajo County Sheriff’s Office did not release the name of the officer fatally shot, but a White Mountain Apache Tribe tribal council member did so and Arizona media sources have disclosed Officer David Kellywood’s identity.

"My sincere condolences to the White Mountain Apache Police Department and to the family of Officer David Kellywood. David was a fine officer and genuine man of character. His loyalty and devotion to the public safety of the Fort Apache Indian Reservation will always be remembered," commented White Mountain Apache Tribe Councilor Jerold Althaha in a statement. "God bless the family of our fallen hero."

Officer Kellywood is survived by his wife and two children.

Those wishing to donate can do so at any Wells Fargo Branch in Memoriam of Officer David Kellywood account number #1274804507 Contact information for the family through the Police Department is Elmer Lamson (480) 737-0470.