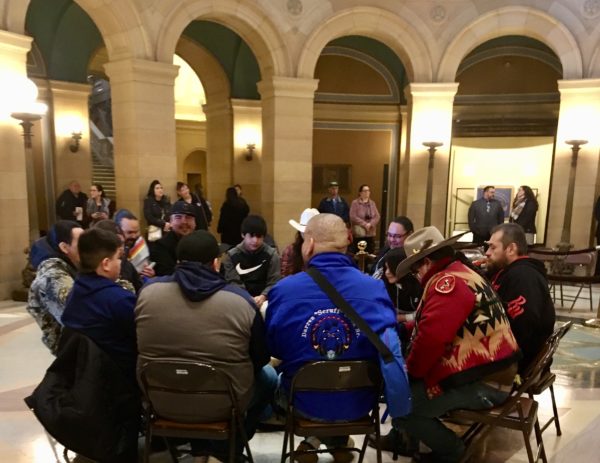 PAUL, Minn. — With the sun shining brightly, the air cool and crisp, a delegation of more than 60 members from Red Lake Nation met at the Minnesota State Capitol building for a Day at the Capitol last Thursday.

The delegation included the Red Lake Nation’s tribal council officers and representatives, hereditary chiefs, students, program directors and staff. They traveled to St. Paul to engage with state elected officials to ensure Red Lake’s voice is heard and to advocate for issues where state and tribal governments intersect. 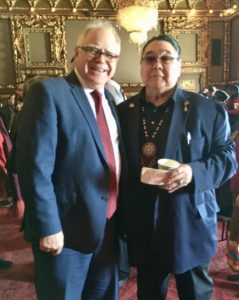 The Governor and the Chairman

All were gathered in the rotunda of the Minnesota State Capitol. After being presented with asemaa (tobacco) by Red Lake Chairman Darrell G. Seki, Sr., Frances “Frannie” Miller did the invocation in Red Lake’s Official Language, Ojibwemowin.

The Honor Guard, Earl Fairbanks and John Barrett, posted the colors. (Red Lake flag and Eagle Staff) Then came four songs from the Red Lake Big Drum, the heartbeat of the Nation echoing in the cavernous state capitol rotunda.

Legislators, and legislative staff, drawn by the sound of the drum, were seen leaning over the second-floor balcony, exposed to and learning just a bit more about American Indian culture. Students from Red Lake schools also attended the ceremony. Lt. Governor Peggy Flanagan, a member for White Earth Nation, was among the spectators on the balcony overlooking the drum.

Following the opening ceremony in the rotunda, the delegation met in the Case-Gilbert Room of the Capitol for briefings and discussion with legislators representing the Red Lake and Bemidji area.

State senator Grossell provided an update on prospects and next steps for the Family and Children Services Initiative. The bill, with bi-partisan support, is making its way through the process which will assist the Red Lake Initiative already authorized during the 2019 legislative session.

Majority Leader Ryan Winkler provided a session overview, with a special emphasis on the infrastructure projects that the Majority intends to put forward. Winkler was born and raised in Bemidji.

State representative Mary Kunesh-Podein provided an update on the Missing and Murdered Indigenous Women Task Force, which she co-chairs. She noted that the intention of the task force is to arrive at solutions for the gaps, oversights and barriers often found when investigating murdered and missing Indigenous persons.

State representative Tina Liebling, chair of the House Health and Human Services (HHS) Finance Division committee, shared her insights as the chair of that committee, and showed great interest in the proposed Family and Children Services building. A briefing on the planned building was provided by Red Lake Family and Services Director Cheri Goodwin.

The busy morning went by in a flash, and all too soon the delegation needed to transition to the Capitol’s Room 130, where the delegation was honored to be invited to visit with the Governor in the Governor’s ornate reception room. During the visit, Governor Tim Walz restated his view on the importance of building on the State and Tribal Community alliance, and to make it even better.

The delegation was treated to a working lunch in the State Office Building, where the group had time to catch a quick breath before the afternoon session began.

Representative Mary Murphy, chair of Capital Investment, then talked with the delegation about the capitol bonding process. She was provided the FCS presentation by Director Goodwin. Following quick on Rep Murphy’s heels was Commissioner of the Minnesota Department of Corrections, John Schnell. He was asked about prison disparity rates for Native people, especially at the Shakopee prison where about 30 percent of the women’s population is American Indian. Commissioner Jan Malcolm from Minnesota Health Department provided a snapshot of the health issues her agency is currently focusing on, with the opioid epidemic being high on the list.

The Minnesota Department of Public Safety was next, where Assistant Commissioner Bruce West provided a brief on the efforts on the Emergency Communication Network that would assist 911 in getting to emergencies made from cell phones, in particular those where geo-locational data is not always available or reliable. Deputy Commissioner Brad Lindsay of the MN Department of Veterans Affairs dropped in for a visit. He thanked our Veterans and families for their service. He assured all, that the MN VA would provide whatever positive assistance they could. Representative Robert Smith (Red Lake), expressed the frustration of many Veterans who feel when they return to civilian life, they often face a difficult time in getting Minnesota certification for jobs and skills they were trained for while in the military.

Finishing out the afternoon session, was the Ombudsperson for American Indian families, Ms. Jill Esch who updated the delegation on statewide systemic problems with Indian child welfare. Each made the case for separating her office from the other Ombudsmen given the nature of her work with ICWA (federal law), the number of statewide cases, and the necessity for coordination with Tribal governments, that other officers do not encounter.

After a busy day at the Capitol, the delegation and friends were treated to a sit-down dinner at the Best Western Plus, across from the Capitol. The food was plentiful and the conversation free flowing. It was a fitting conclusion to a productive day with the Minnesota state government.